Only a few of the stopping places had any kind on hard or gravel surface while the others did pose some challenges to stay on our feet. Now that I've seen the Dodge outdoors, I'm very pleased with the look. It seems quite well balanced visually and in the travel position, doesn't stick up too high above the canvas. 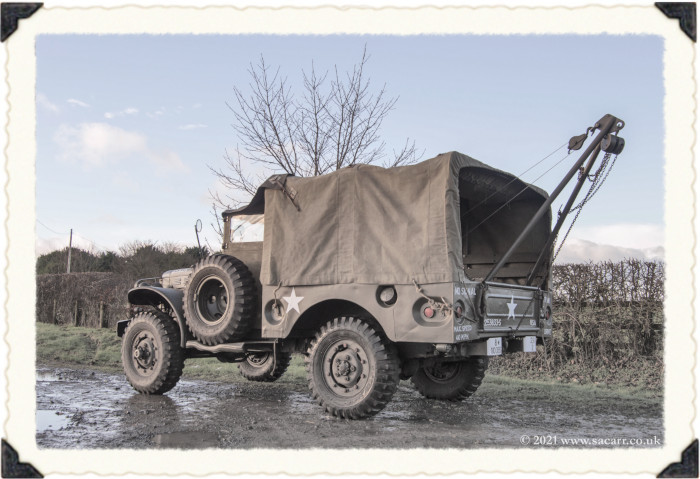 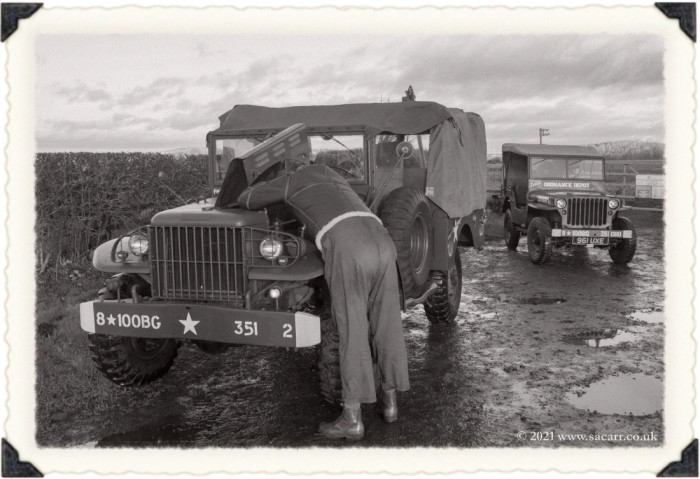 It will be even better once I have a dummy propeller to hang from the crane, or perhaps even a Willys Go-Devil engine crate to set up an engine change diorama. After all the effort through December, it was great to see the crane finished and outdoors further than the garage door! 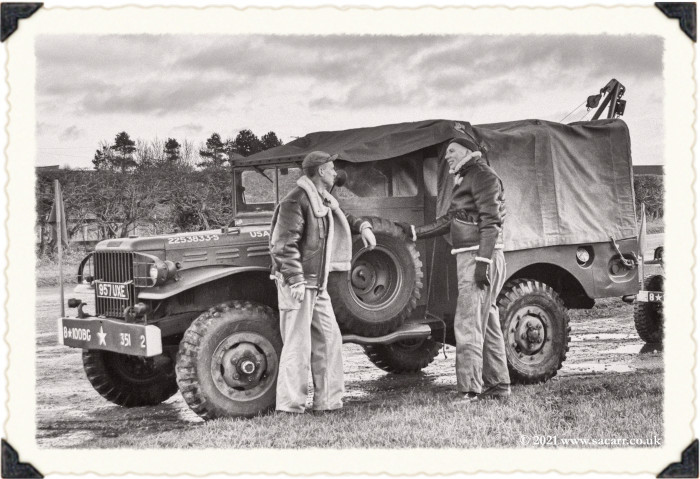 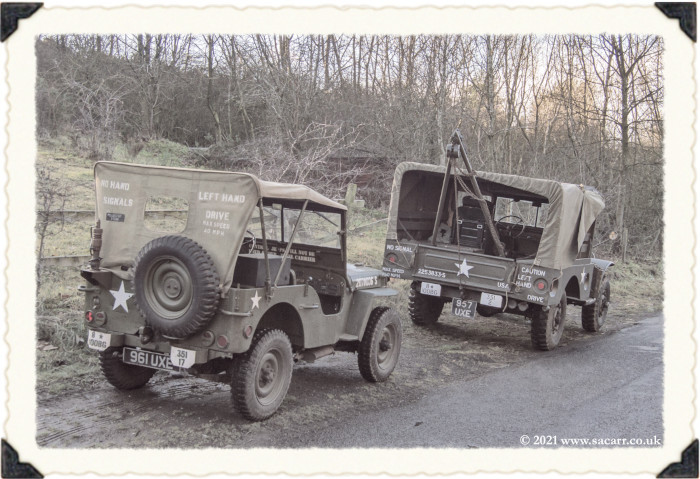 It had been a great morning, with us out for around 90 minutes to do the 14 miles covered. While it had been a mild day, a nice warm coffee was required before I considered putting the vehicles away. 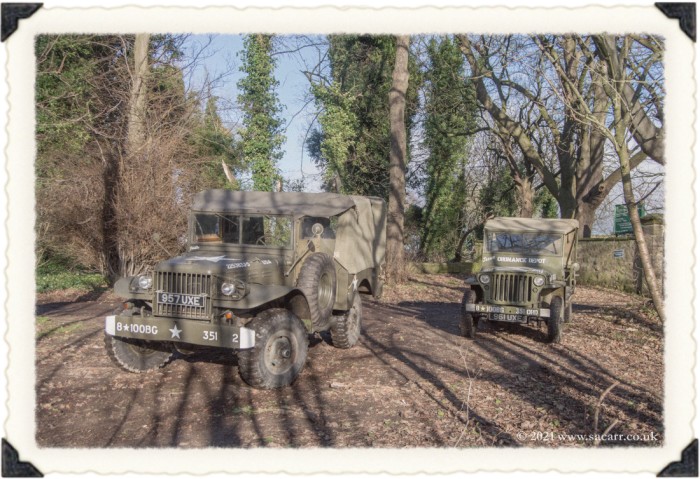 Before I packed away however, I thought it best to give the vehicles a wash down. The gritters had been out just before Christmas and while I was hoping all the rain would have washed it away, I wanted to be sure they were salt free. 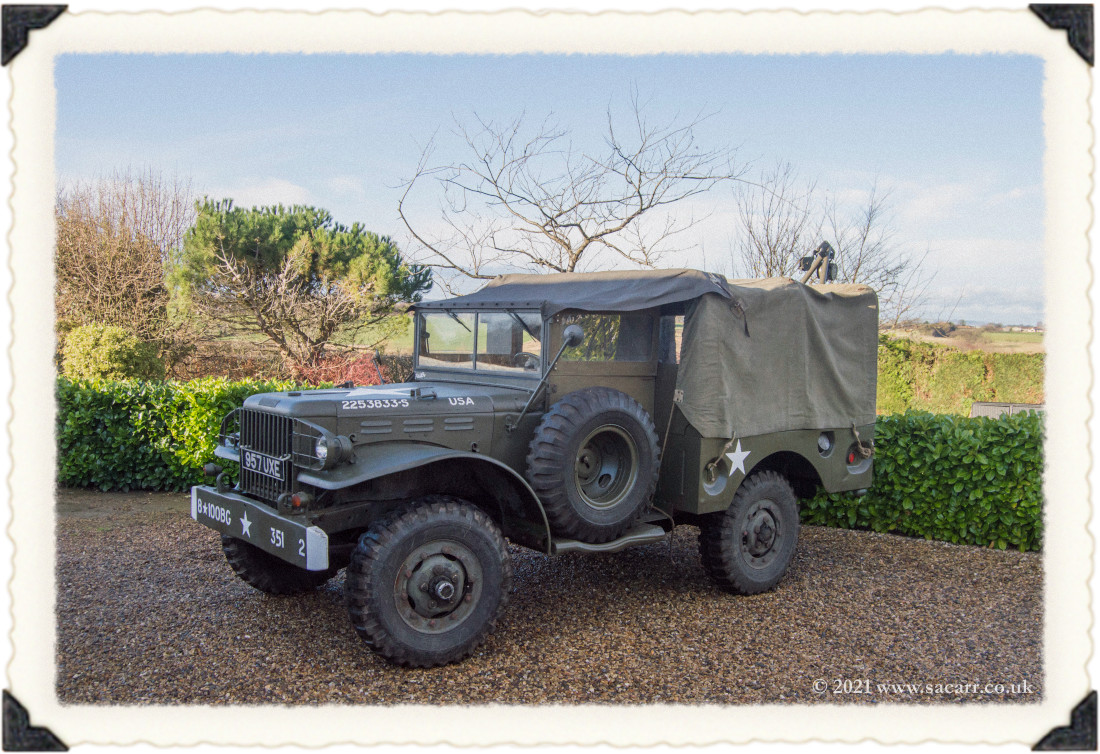 I don't know how old the Dodge canvas is, but it probably dates back at least to Norwegian Army service. There's a few small wear holes in it, but overall, it isn't too bad. One of its main problems was that three of the buckles on top were missing - the leather buckle straps having snapped long before I got it. Two of the cab canvas buckle straps had also snapped at some point and new straps sewn onto the leather patch, rather than un-sewing it and using rivets as it originally had been.

A friend had a spare buckle on a patch which he posted to me. It may have been from a GMC or different model of Dodge, as the patch shape was different to my WC51 canvas. This was going to be a doner for the rear right fixing. I'd also bought some leather belt blanks to make some new roof straps to replace those missing from the bows. I hadn't found any originals in the UK and those in Europe cost a fortune, before shipping and import duty. As the bow metalwork isnt original ( I think it's Norwegian ), I wasn't worried about the straps not being 100% authentic, especially as this was considerably cheaper. 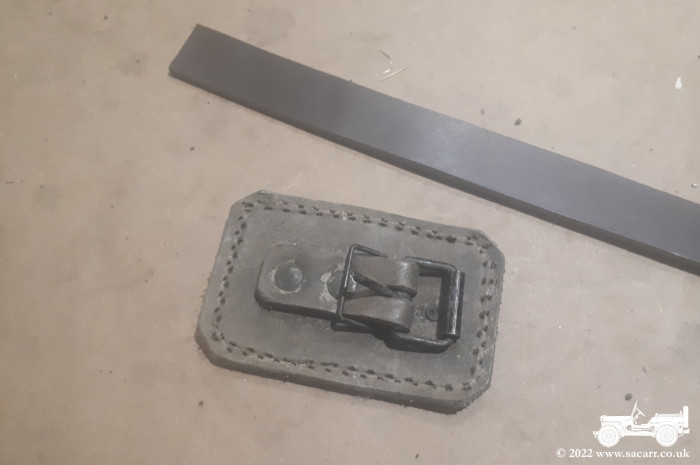 As you probably noticed from the pictures taken while I was out driving, I've only had the front corner of the canvas rolled up. Once these repairs were done, I'd be able to roll up the canvas side properly and secure it. Here's the original fixing with the snapped leather strap and the doner patch and buckle. 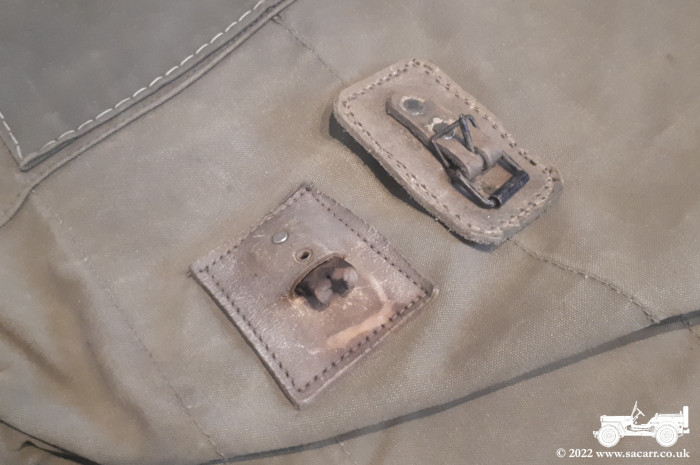 The rivets were ground off the doner buckle with a mini drill and stone wheel and also off the snapped strap remains on the roof. This separated the buckle and its strap from the patch. This was a test to see how well/easy it would be before I went hacking away at the other two! I still have the other two snapped straps to cut free and I'm waiting for two replacement buckles and some leather rivets to arrive in the post. 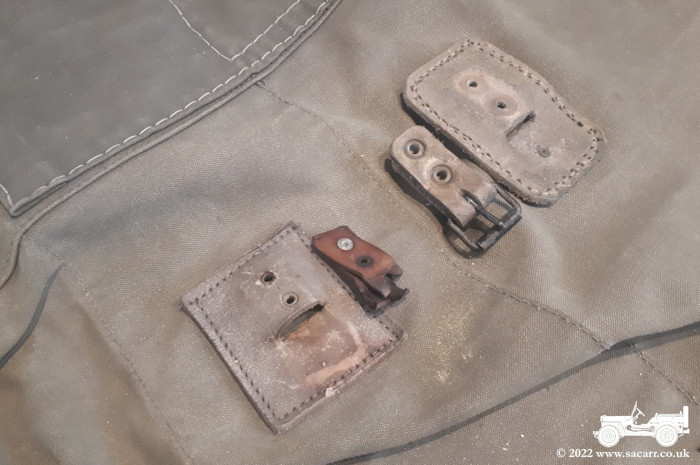 The leather belt blanks were also cut to length, ready for the bows, but I'm also waiting for some hardware to attach them. The leftovers from the belt blanks will be used to attach the new buckles to the front of the canvas. Once repaired, I'll have a full set of buckles to hold the rolled up canvas. 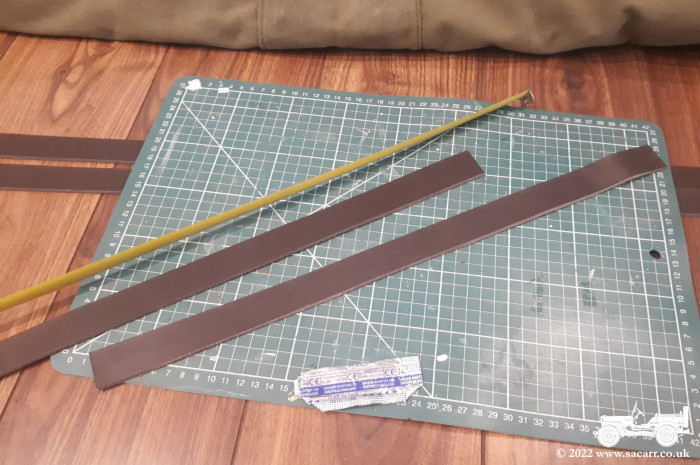 Another small step forwards on the canvas repairs. When I ordered the leather straps, I actually ordered one more than I needed by mistake. Two was enough for the six straps needed, but it was a couple of weeks before when I worked out the lengths needed and when I came to ordering, bought three in error. It turned out just as well, as this gave me spare material to replace the missing front buckles. I hadn't realised the two front ones were missing initially.

Two new lengths were cut for the front buckles and were folded in half and fed into my bandsaw to cut the centre slot. For many years I've had a leather punch, which I think belonged to my granddad. I've never needed to use it until now but the cutters were still sharp and made nice clean holes in the straps, ready for the new buckles. 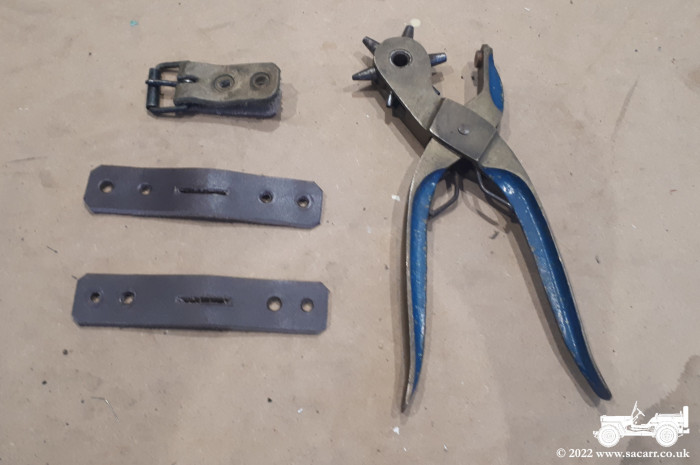 I found some small D-rings on Ebay which were pretty cheap. They aren't the right shape, but wanted the canvas useable and able to be rolled up, as soon as possible. These will do for now until I can make a proper set. The gloss, gunmetal finish was scrubbed off with fine wire wool and they were then given a couple of coats of olive drab. 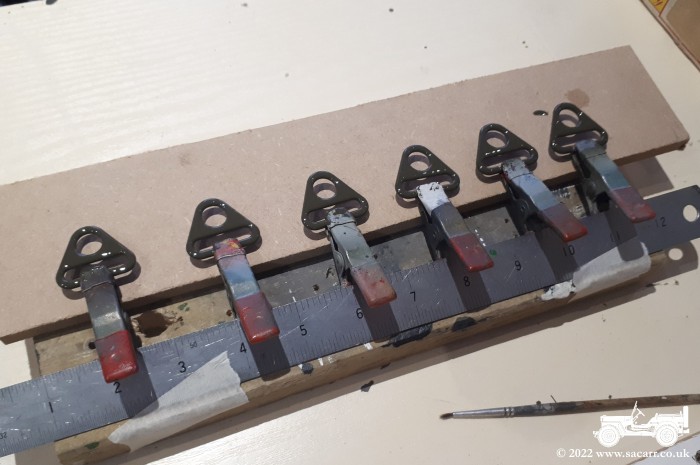 The last of the bits and pieces arrived in the post today, so late afternoon, I set to work. The new buckles were slotted onto the straps I made and riveted into the canvas. They weren't a bad match for size and shape of the original buckles. I'm sure they'll dull down and I can always give them a light wire wool to help that process. The third and original strap was also riveted in place, giving me a full set of buckles across the whole canvas. 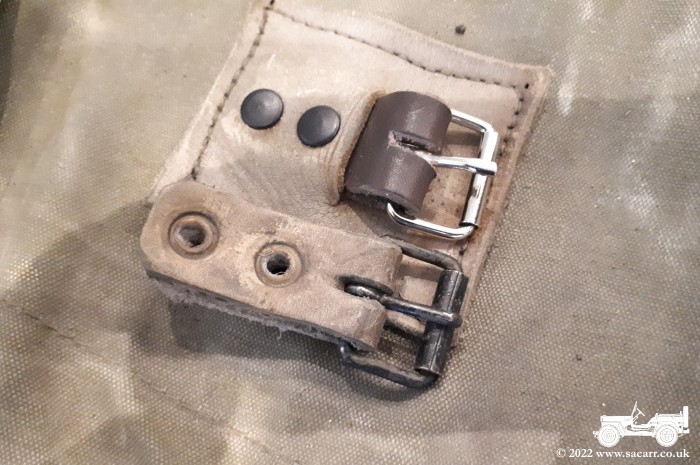 The six canvas straps, that hold the roof canvas when the sides are rolled up, were next. They were riveted onto the D-rings firstly. These rivets can be cut off when I get around to making the proper rectangle fittings. I'm going to have to mount these onto the wooden bow, rather than the metal curved corner piece. Other photos I've seen are mounted through the lower hole in the curved metal corner of the bow. The metalwork on my Dodge is I think Norwegian, and the metal is split into front and rear halves. There's a joint down the outer edge where the two pieces meet and where the original mounting hole was located. 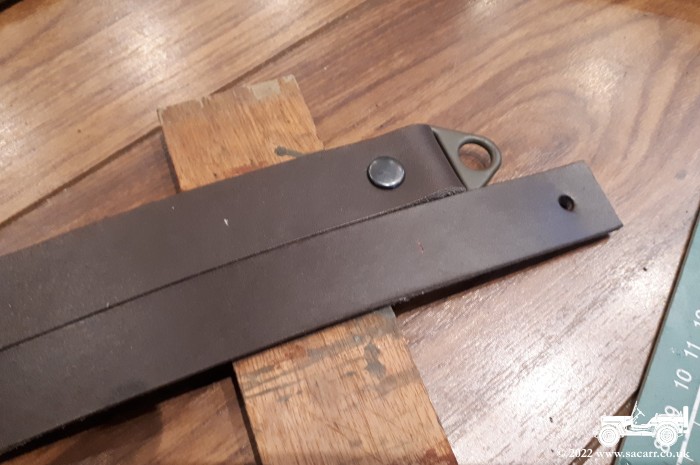 The ends of the leather were cut to a point and then I started the long job of punching out the holes for the buckles, based on a picture of an original for the hole spacing. One done, five to go. 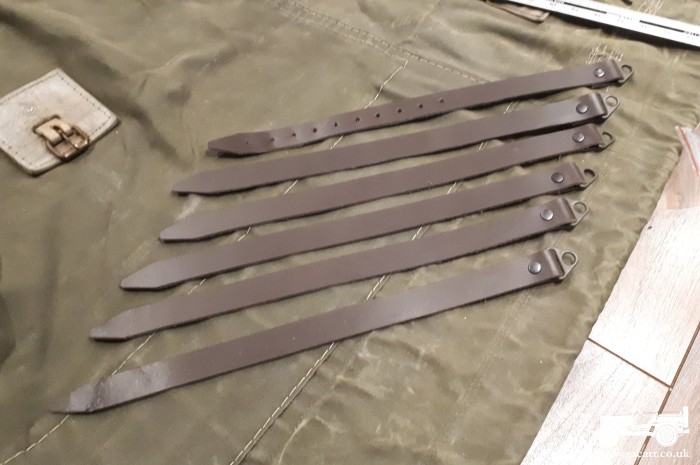 All the holes were marked out in pen first and then the slow job of punching out the holes began. After each punching, I had to pick out the leather waste from the tool. Unfortunately the tool has a blind hole, so the waste couldn't be poked out from the other side, but had to be picked out with a scalpel blade. 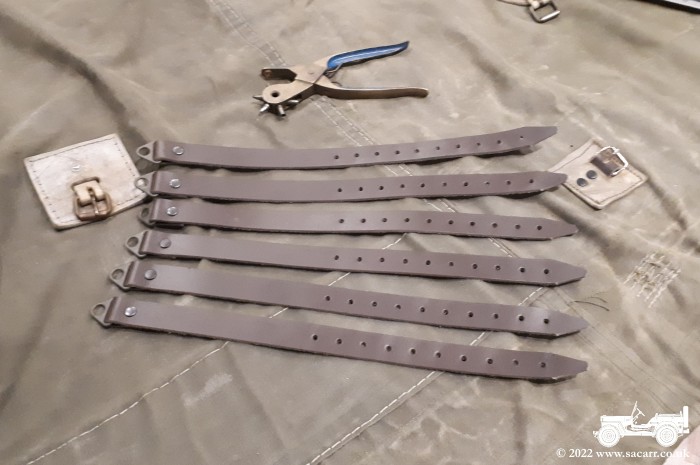 At some point, I'll probably invest in a new canvas, possibly with a custom made rear curtain to accommodate the crane. This canvas would then return to being an overnight cover for the Jeeps at weekend shows. One of the straps is shown below, test fitted into the repaired rear buckle.

So I now have a repaired canvas and six new straps ready to be fitted, which is the next job. I'll try and do that inside the garage, but may have to take the garage door runner cross brace off to allow the full canvas and bows to be fitted. 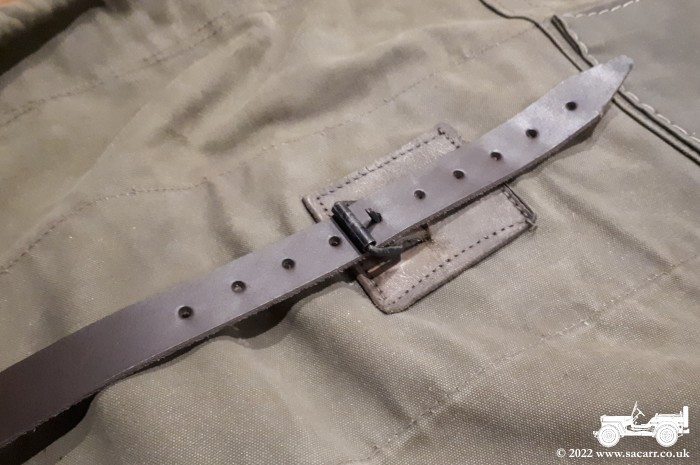 On the morning of the 11th, I went out to the garage to fit the straps. The two rear bows could be fitted between the garage door runner, though the centre brace would have to come off if I wanted to fit the canvas. The front bow is tucked between the Dodge and garage wall. With the woodwork, canvas curtain, first aid kit and fire extinguisher bracket, it's heavy and awkward to lift out of that position, so I didn't bother fitting it to the Dodge. 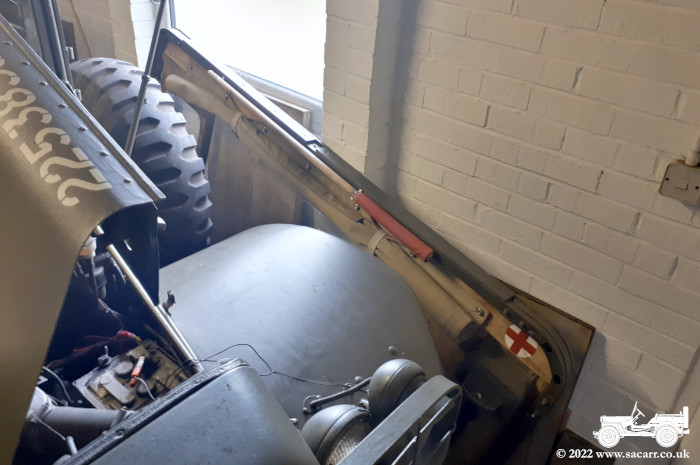 All the bows had existing holes from previous straps, though the holes were lower than the proper position, below the metal corner bracket. I fitted the straps to the front bow where it was, against the wall. 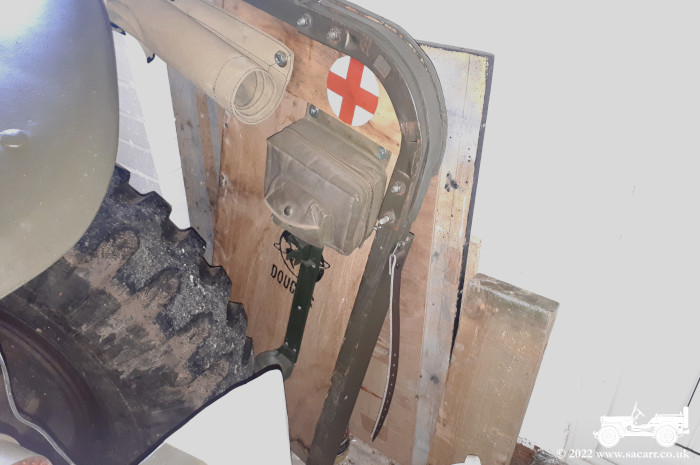 With holes already there, I didn't bother making fresh holes in the correct position. When I get around to making some proper strap fittings, I might look into drilling the metalwork for the proper location and plugging the current holes. 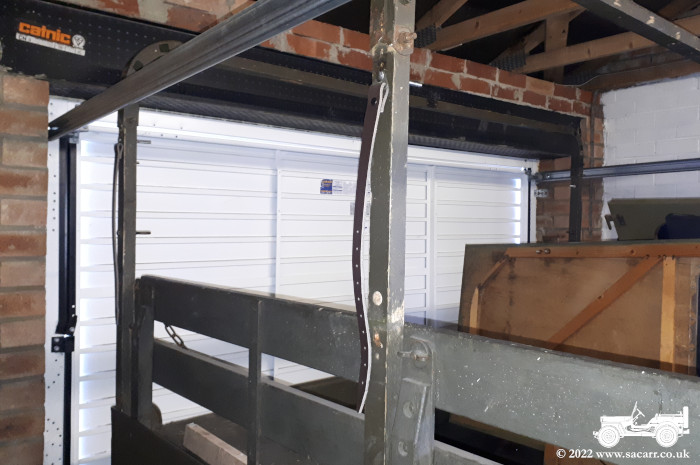 Since they'll be removed again at some point when I make some proper fixing hardware, I just used a little PVA glue to lock the threads for now. The excess bolt length will be trimmed off once those have dried. I think I'll have to get the Dodge out to try the canvas on, with the sides rolled up, as it will be easier than in the confined space of the garage. 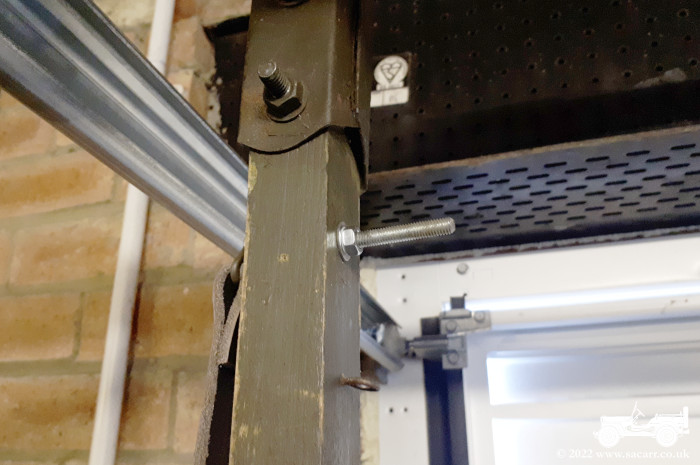 Despite my last comment, I decided to try and fit the canvas on the Dodge inside the garage, partly to recheck the height in relation to moving the garage door lintel. The garage door track cross brace had to be removed first, as the truck is taller than the door runner. Then the heavy front bow was jiggled out of its position against the wall and into place on the Dodge.

That was easy compared to wrestling with the canvas in the confined space between the door runners to the side and roof trusses over my head, trying to stop it from sliding back off the bows as I fought it into position. 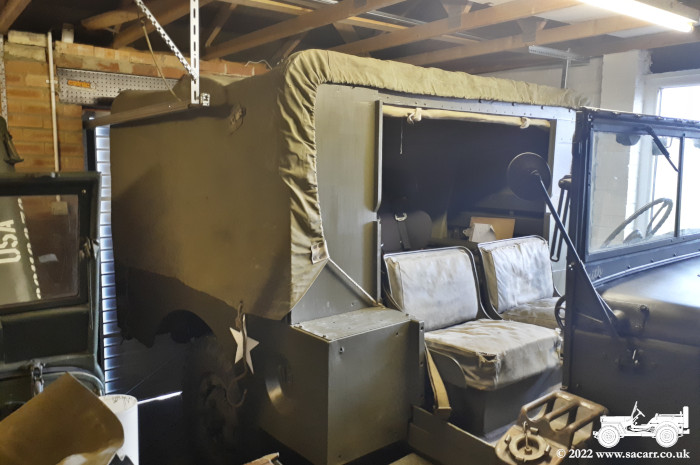 I got there in the end and rolled up the right side. All was well. 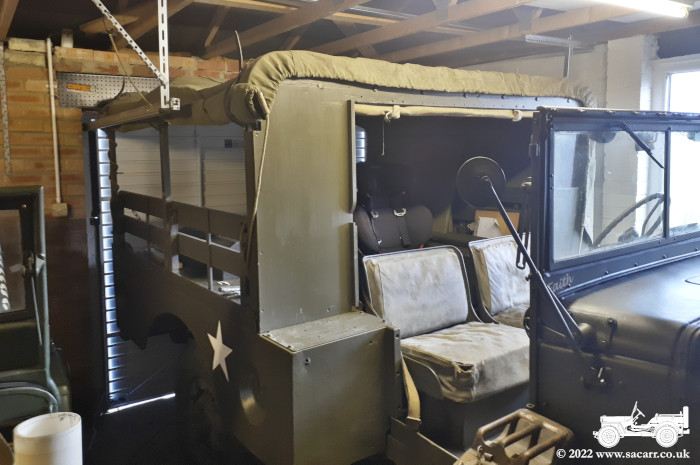 Despite the straps being mounted slightly lower than they should be, due to using the existing Norwegian holes, the canvas rolls up far enough to give a clear view to the side. 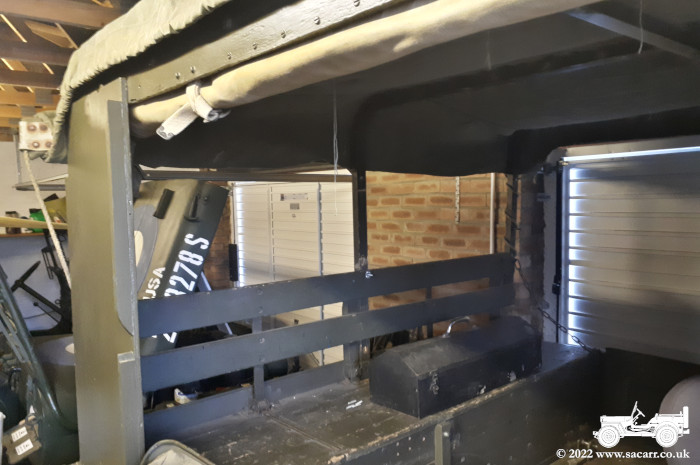 It enabled me to get a better sense of the clearance, or lack of, between the truck roof and the position of the garage door lintel, once raised to its new position. The string in the last picture marks the lower edge of the new lintel, which will be moved right up to roof truss height. It doesn't leave much room for a frame around the door. I'm probably going to go with outward opening wooden doors and a custom thin frame over the top, as the various styles of metal doors all seem to require at least a 2 inch frame over the top of the door, often due to the locking mechanism. 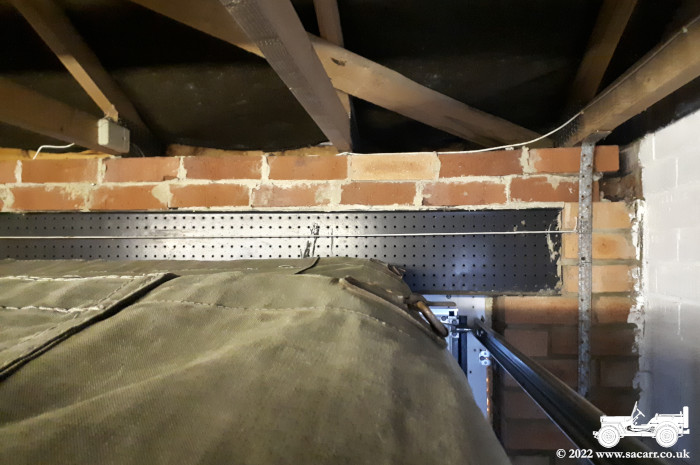