The garage doors do still need altering, but if the Dodge was altered to fit the garage ( rather than the other way around ), there was no longer the pressure of when the builders will turn up. All three vehicles will have to live outside briefly when the work does start.

So with the Dodge's future looking more like a standard cargo truck ( but not completely normal, this is me after all ), I set to work taking the first steps towards the conversion and getting it indoors. The Dodge radios and internal equipment were stripped out as the first step. 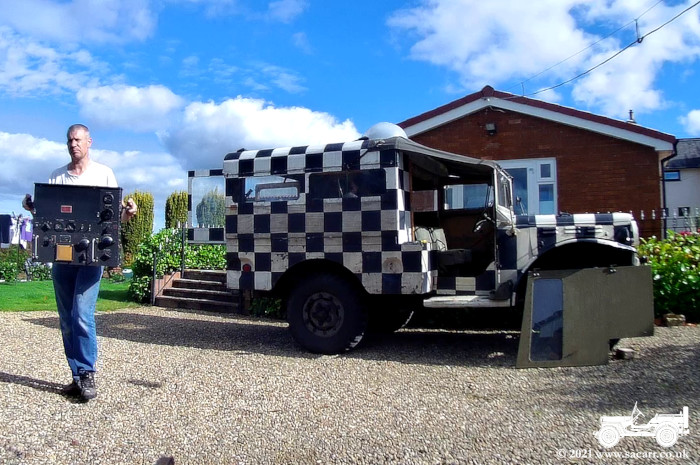 The doors, dome and canvas cab roof were removed and then I started removing the wooden panels. Some of the internal wiring and shelving needed to come out before the side panels as there were lots of items connected together. Here's a few stills from a time lapse video of the teardown. There was some light gluing of panels onto the bows, but most fixings were coachbolts. 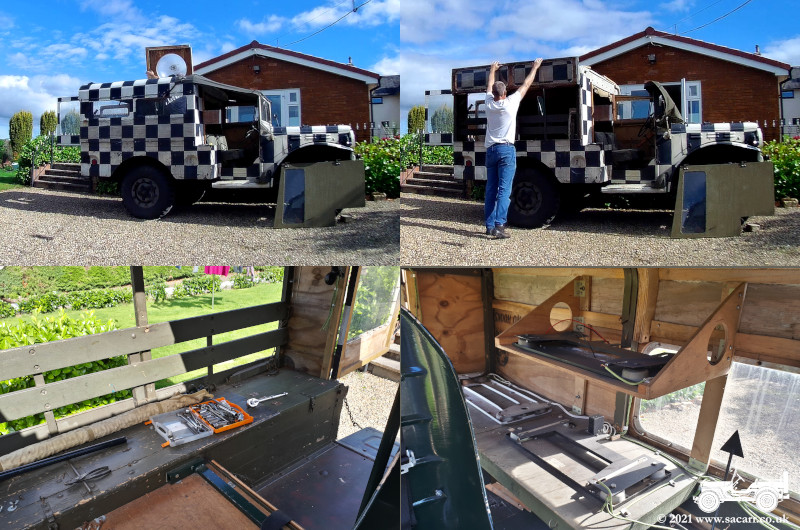 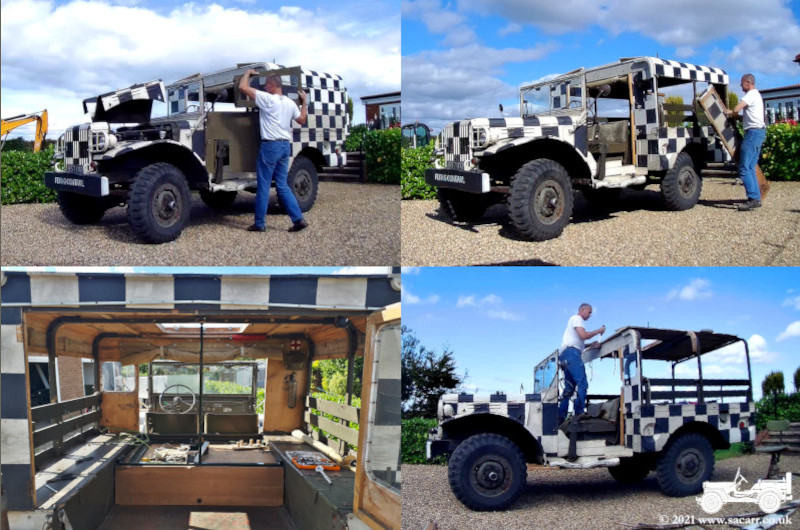 It took most of the day to pack the B-17, move the Jeeps and strip the body down. It was strange to see the Dodge as a pickup truck after so long with the Flying Control body fitted. 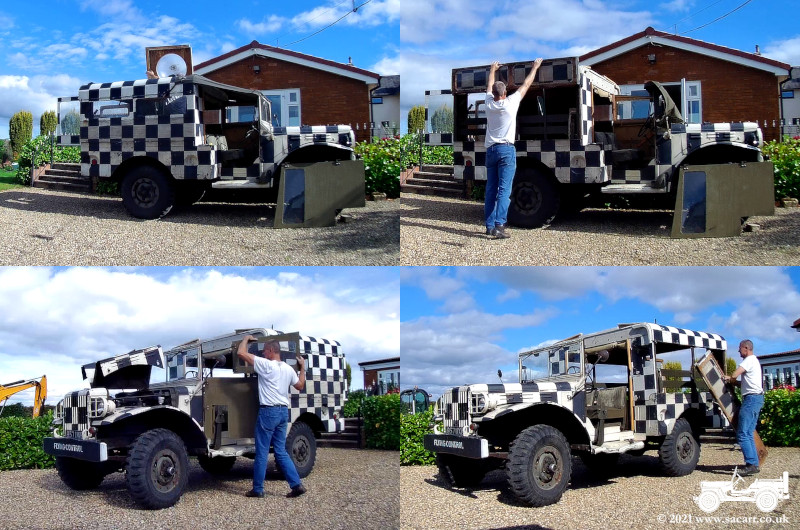 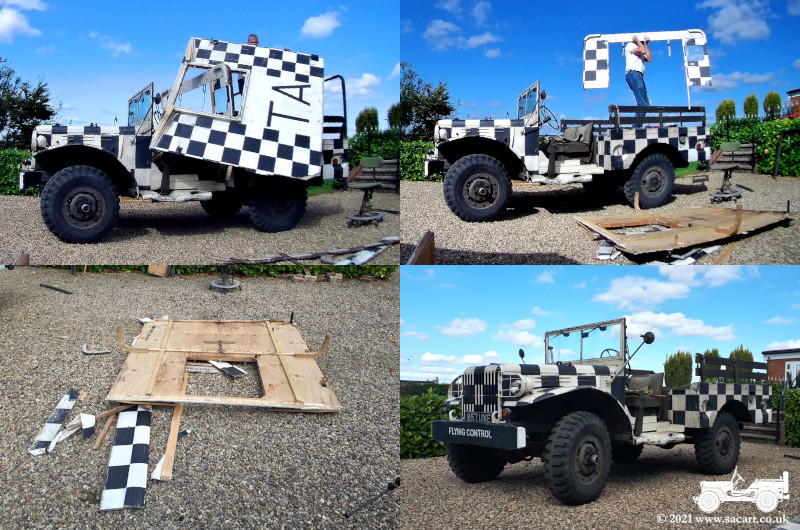 The section of bodywork attached to the front bow would be kept and reused. This would also allow the doors to still be fitted and have something to latch on when closed. It will also help to keep the wind out of the back. 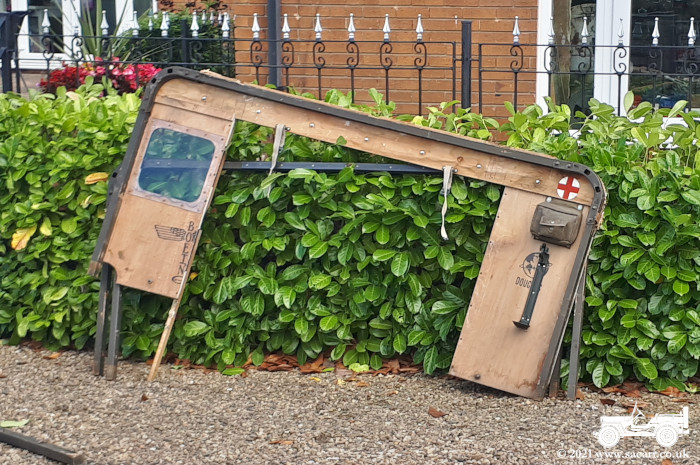 Now with the existing garage doors, it is a tight fit and I REALLY mean TIGHT! Allowing for odd fittings on the body, Dodge is a tiny fraction under 84 inches wide. The opening between the garage door mechanism is 85 inches!!! It took a while to turn the Dodge around and get it lined up with the entrance for a last visual check. 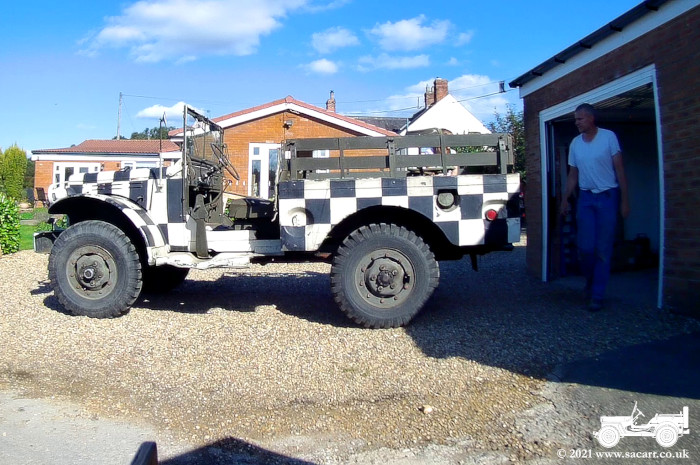 With my daughter's help in the back of the truck guiding me, I carefully lined lined up on the opening, though it took several attempts. 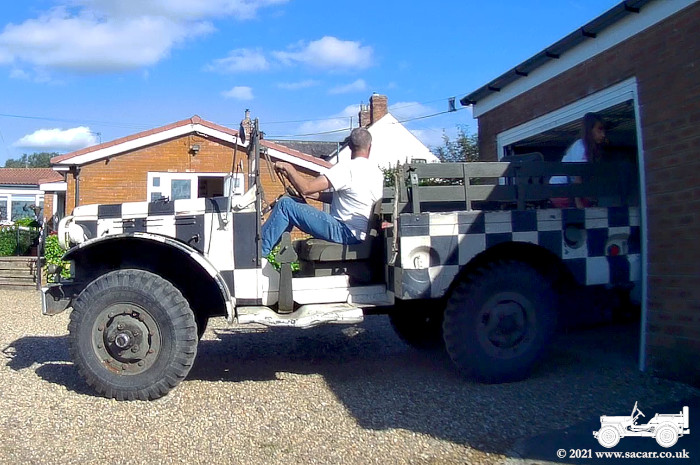 So six months after arriving at the new house, the Dodge finally joined the two Jeeps indoors in the garage. It's cozy in there, but there's room to get between all the vehicles. There'll be a little more space between them once the door openings are wider and the vehicles can be angled better. For now, I'm just happy that they are all under cover. 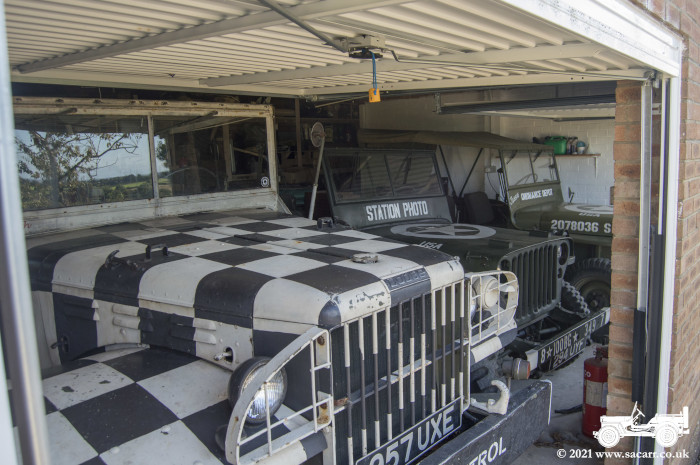 Since the Dodge is now out of the weather, over the Winter, the transformation to its new form can begin. Here's most of the body ready to be recycled. Just the dome and rear doors are missing from this shot. 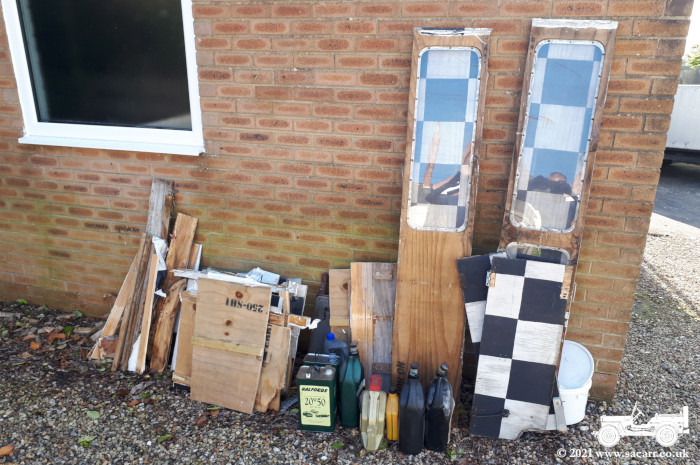 To finish, here's the day's work, a timelapse video compressed into 6 minutes. Actually, the stripdown only lasts 1 minute - the other 6 minutes are turning around the trying to fit through the door!!!

I enjoyed watching that Steve.
Coming together is a Beginning...Keeping together is Progress...Working together is Success.
Be Yourself, Everyone else is Taken...Oscar Wilde
A POW is a man who tries to kill you and fails, and then asks you not to kill him...WSC
Top

Cheers. It's a bit sad to see it go, but the change has been on my mind for a couple of years now. However, a new adventure and new look awaits!

On the 17th, I began stripping the checkered paint from the Dodge. A few days ago, I did a test with a chisel, chipping away at the paint and lifting it in flakes. This would be quicker than trying to sand through the black and white layers. The green below could then be lightly sanded to key the surface for a new olive drab paint layer. 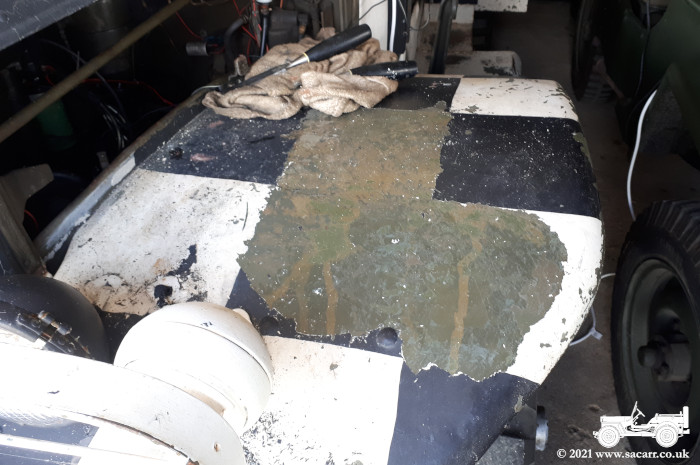 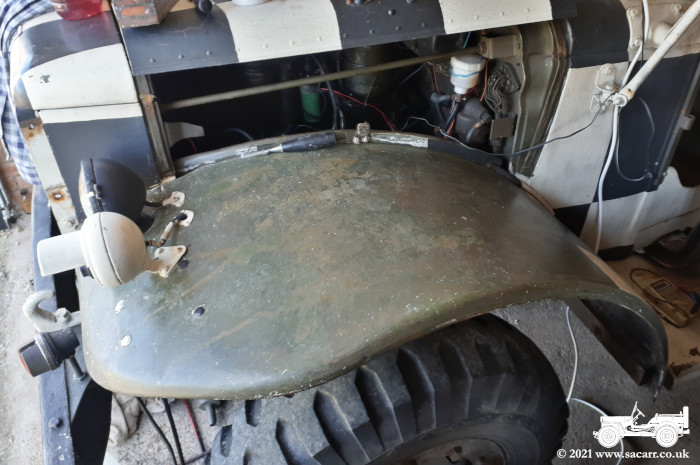 While scraping near the radiator cap, I found the blue circular marking seen below. I suspect this may have been something from Norwegian army service, but can't be sure.

After school, little legs came out to help and surprised me by managing around 3 hours of scraping. I underestimated her staying power! By the end of the day, one fender, the section over the radiator, most of the radiator grille and part of the rear body were stripped of their paint. 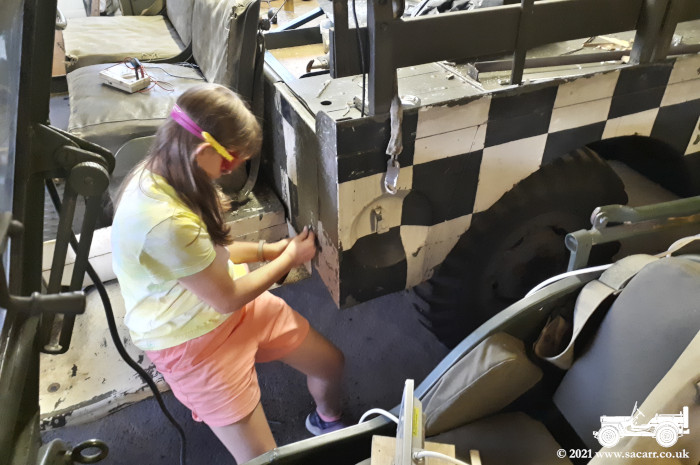 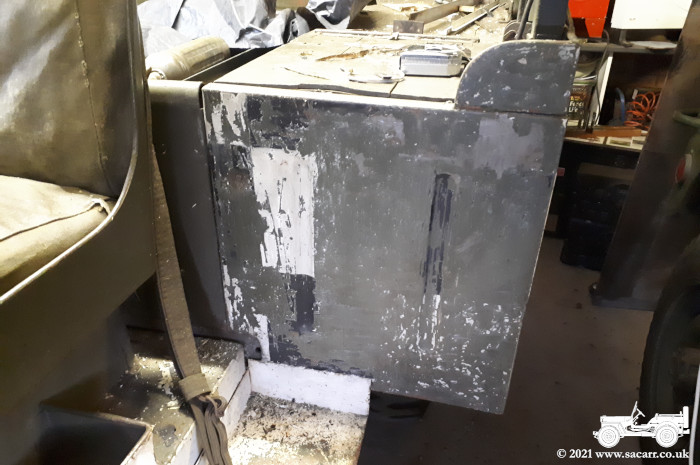 The light protectors were removed both to aid stripping the paint from them, but also to better access the paint on the fender and lights. Once I'm down to green all over, I'll probably go for a drive and get some photos; then it will be back in the garage for the sand and painting stage. Of course, olive drab and canvas is just step one in my master plan!! 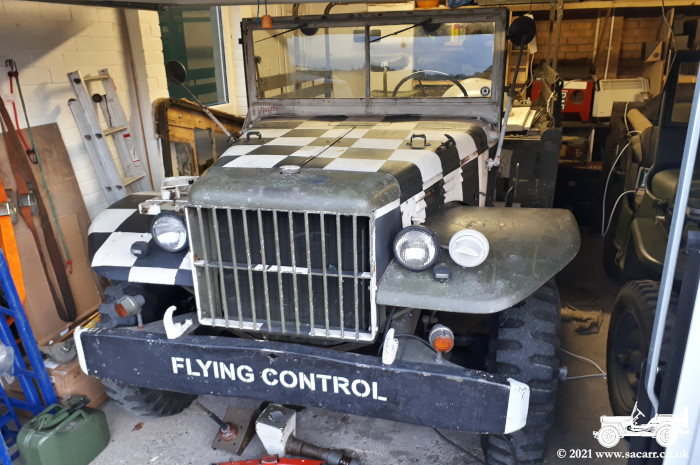 On the 19th, I focused on the step and cowl over the instrument panel. The paint on the step proved to be particularly difficult to remove. After that was done, I worked forwards along the small upright section of body beside the seat. From there, upwards passed the mirror bracket and over the top of the instrument cowling.

The following day, I began work on the main section of the hood. I'd repainted this some years ago due to rust patches. The black and white didn't want to chisel away from the olive and in places, even the primer lifted. The paint was very hard and wasn't in the mood to be chiseled! However, having been decorating recently, I decided to give the wallpaper steamer a go. It had worked well to remove emulsion paint from a wall, so perhaps it could do the same for the checkers, which were also emulsion. Back when I did the rust repairs, I'd only given the area a thin coat of olive paint as it was going to have checkers over the top anyway. The steamer brought off the black, white and olive fairly easily, in most areas leaving the primer behind.

The side of the hood was going to be harder to steam due to the louvres, but as it turned out, the paint came away very easily, having no primer at all and very little olive drab. I'd never touched the side of the hood, so I'm guessing it has had a lack of primer since its Norwegian Army days or during the ownership of the Norwegian collector who was the first owner. The paint was scraped away and the whole panel given a light polish with a rotary wire brush to remove some surface rust. 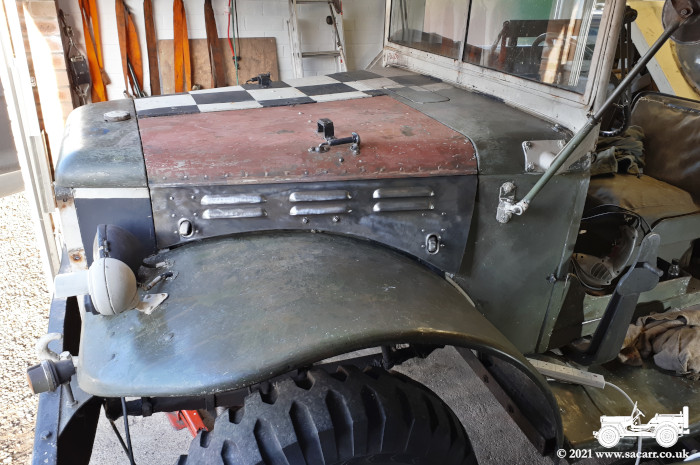 The steamer had worked really well on the hood, so I gave it a try on the rear body, starting at the front. It wasn't long before I found some lettering, which once uncovered, read " STOR. " and below it, " OCT-53. ". These words weren't on the lowest layer of paint, so I'm guessing they date from Norwegian Army service. 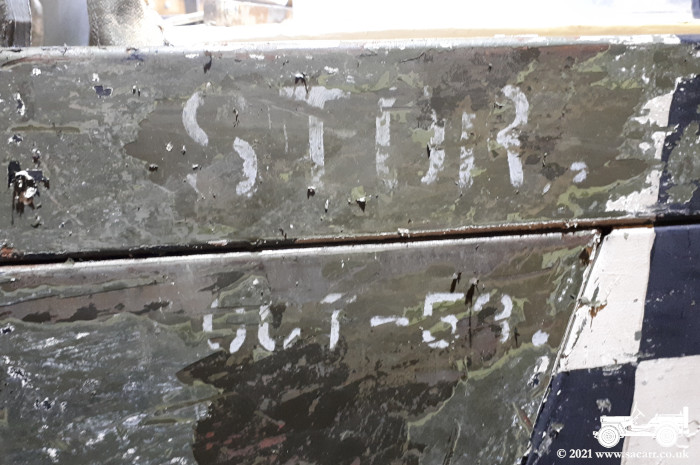 I continued rearwards until reaching the back, then chipped out the paint from the fuel filler and canvas tie depressions. That's the progress so far - almost one side completely stripped. 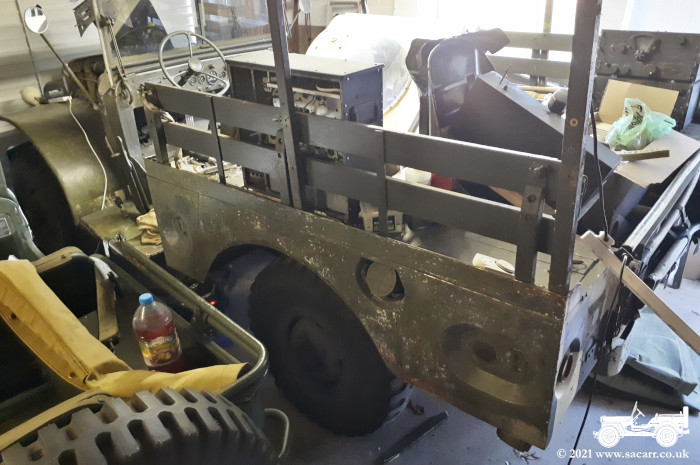 On the 21st, paint stripping continued across the back of the truck. More markings were revealed, but again, I don't believe they are original as I'm not down to the base coat of olive drab. 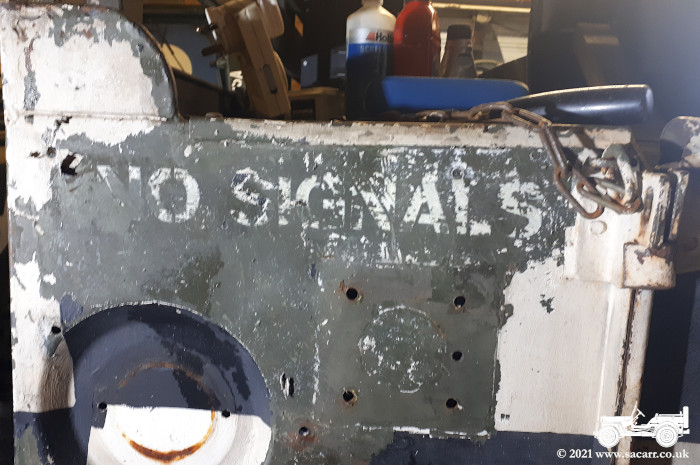 At the right rear corner, there was a large area of rust and thin metal that needed dealing with. The tailgate was also removed to allow it and around its hinges to be cleaned up properly. 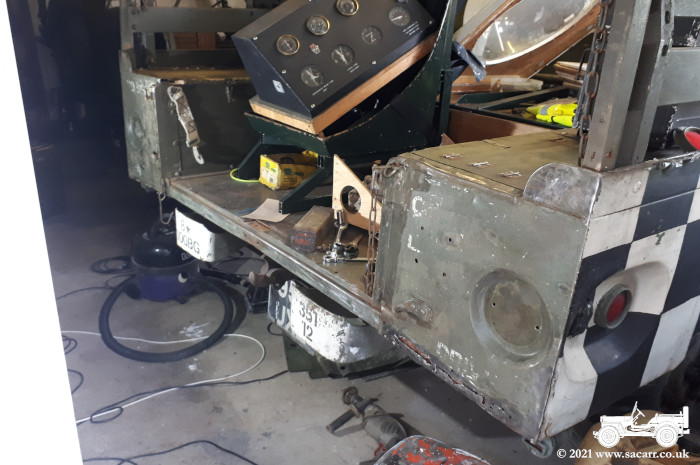 Most of the 22nd was spent cutting out rust, cutting and welding new metal. There were three areas that needed work, two of which I could reach with the Dodge this way around in the garage. On the side, near the driver's step, was worse than the initial pinholes suggested. The other on the rear was obvious. Some etch primer was used to protect the metal until I can get some red oxide primer. 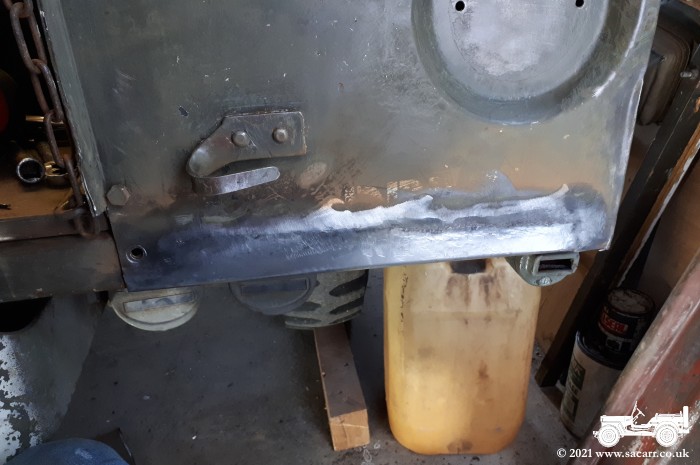 One of the tailgate hinges also needed some cracks welding. At the end of the day, the grille was removed for cleaning the inside. 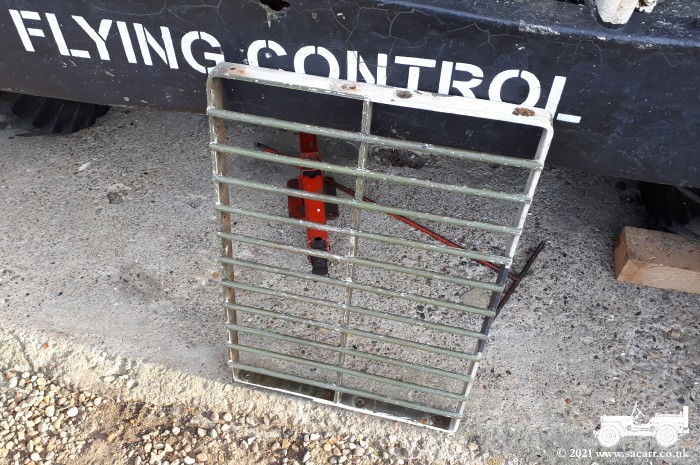 On the 23rd, I began to strip the paint from the lights and brackets. It took most of the morning which included stripping the lights apart to clean in the joints for the lenses. 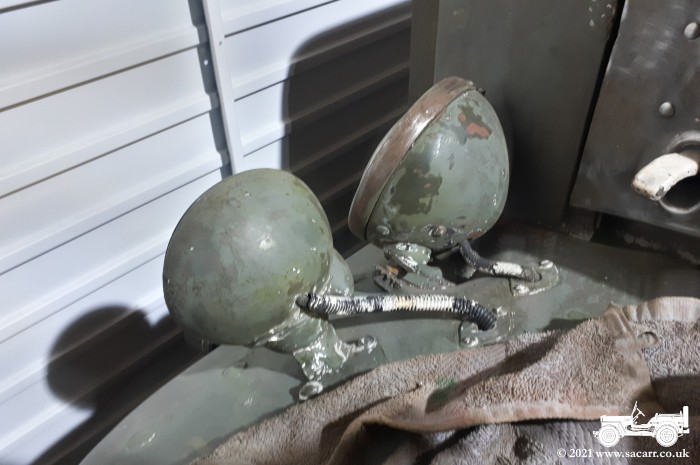 Most of the rest of the day was spent sanding the paintwork on the left side. The welding repairs and some other bare metal areas were given a coat of primer to protect them. 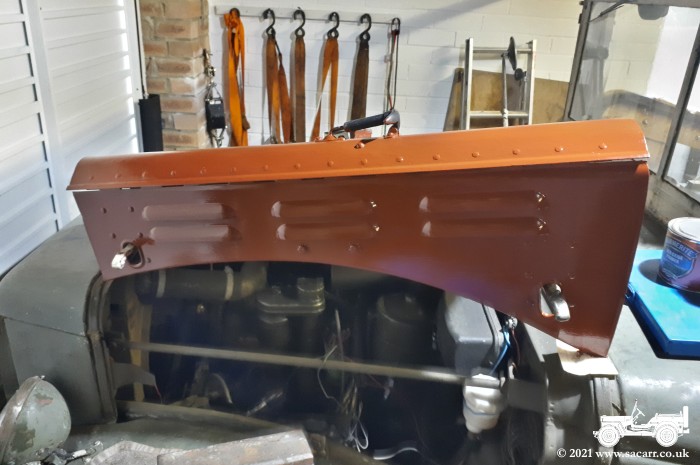 For most of the 24th, I was doing surface preparation. There were a number of gouges from the chisel that needed filling. I'm not worried about a perfect finish, but the chisel marks needed dealing with. There were also a number of small rust spots to grind out, prime and fill. 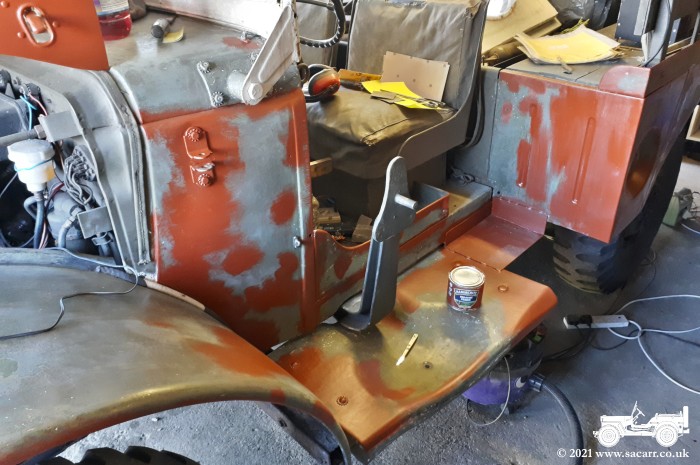 It took some time to sand and grind out the rust in the depression around the fuel filler cap and very few of my tools would fit between the depression and filler neck. To end the day, I stripped the paint from the front bumper. There were multiple layers that were very hard and needed quite a bit of steaming to soften the paint enough to scrape away. 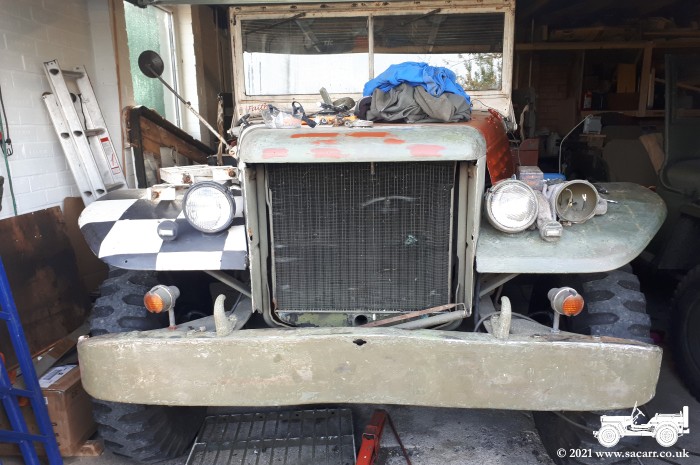 I had another good day today. I started stripping along the right side, with the hood and fender under the chisel. As with the left, the two right side sections of the hood had no primer. I sanded one small section of white to reveal the olive drab below, but stipping it away showed no primer other than my rust touch-ups. 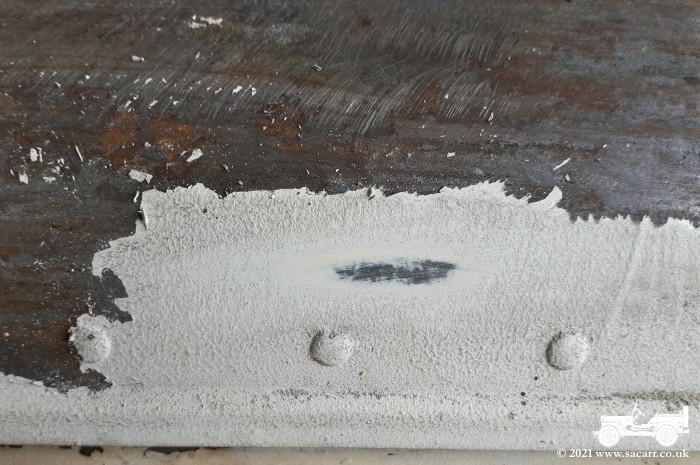 I moved on to the right fender and by the end of the day, most of it was back to olive drab. The front view shows the Dodge looking more green than black and white now. There's the back face of the fender to strip, the screen, cab side and the right side of the rear body. Tomorrow I need to turn the Dodge around in the garage to have better access to the right side. 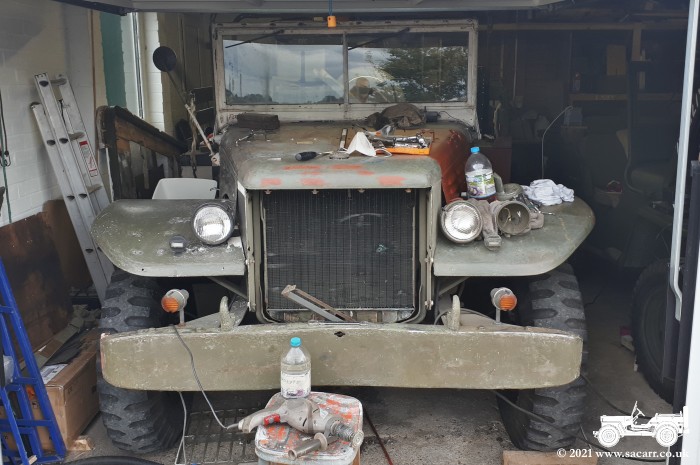 First thing on the 26th, I carefully drove the Dodge out of the garage and snapped some photos in the sun before turning it around and parking up again in the garage. This gave me better access to the right side which still needed stripping. 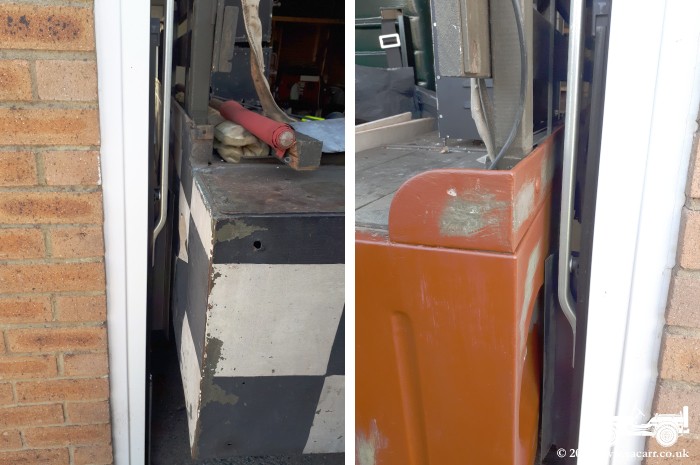 It's hard to believe it's a little over a week since I started, but I'm very pleased with the progress. My right elbow is suffering from all the chiseling but it will be worth it to have what will feel like a new vehicle. 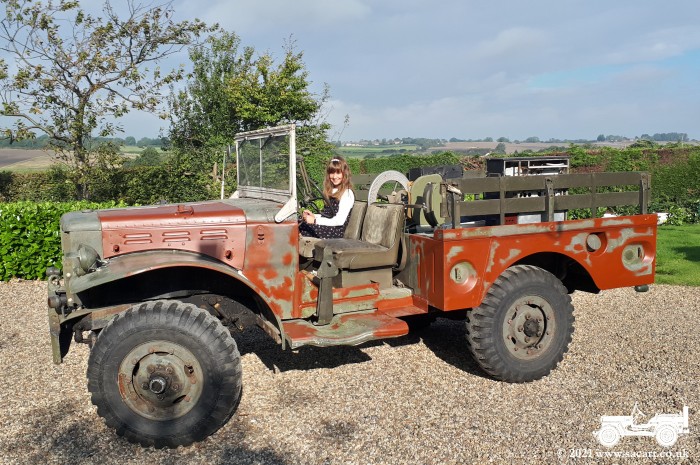