G,Day Steve Keep up the good work . Like reading about your dodge . BUT i have one complaint .Get the B17 up and running along with the P47 Jug . Even if they are hanging from the ceiling . Better than on the floor in the firing line of a Dodge or jeep . Ray
Top

The B-17 is no longer airworthy, 'though the P-47 would be with a new set of radio batteries. They'll both go back into the trailer once I've finished using it to move house as that's their normal storage location. Lots of stuff will have to come out of the garage as soon as the builders want to start work, so for now, the garage floor is a temporary store. I have wooden blocks on the floor to stop the Jeep from going any further back than it needs to. As for hanging them, if I did that, there wouldn't be clearance to get a Jeep in with the roof up ( or windscreen for that matter ), never mind the Dodge!!! The B-17 fuselage is about 18 inches diameter at the largest point and the tail stands 3 feet tall.
Steve Carr

Operating military vehicles is just one of my hobbies. Since childhood, I've also been interested in astronomy, getting my first decent telescope in 2012. I built a small observatory at my old house and I'm waiting to start work on a larger one at the new house. So I'm often on the lookout for astro related happenings and in the Summer months, that is often Noctilucent Clouds. The name comes from the translation of the German words, which mean night shining clouds. These electric blue clouds form right at the edge of space, when ice crystals form on tiny particles of meteor smoke, floating at 250,000 to 280,000 feet altitude. I got a heads up on my local astronomy Facebook page and went out to see. After a few shots of the clouds alone, I decided to go a bit more 'arty' and compose the Dodge into some of the shots. 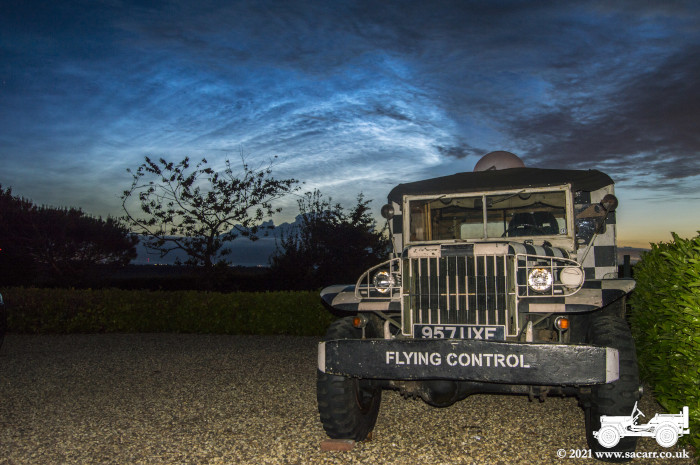 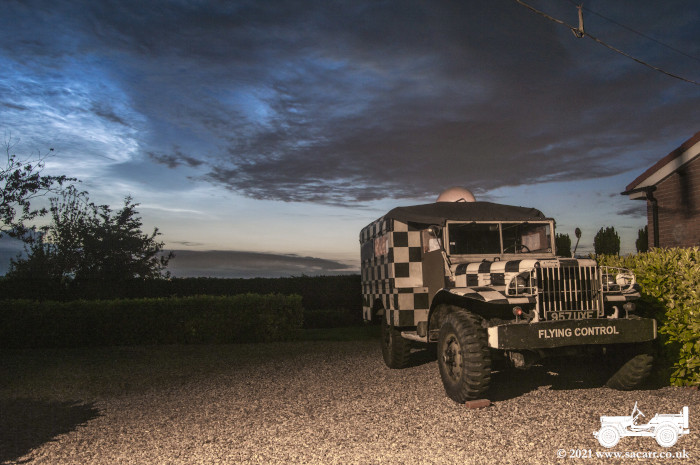 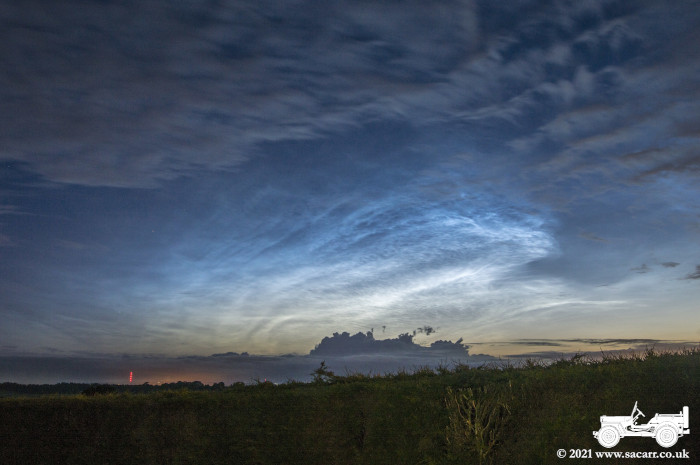 "Faith" the Dodge hasn't been anywhere since arriving at the new house in late March. It was run once, but I had trouble starting up, so decided to look into it today. Starting on 6 volts can be a challenge after a long period of inactivity. The starter pulls all the amps away from the coil. It had done amazingly well on old fuel over the lockdown, but it was time to do those little cleaning jobs and tinkering jobs to make it a little easier!

The battery has been in my workshop, so that was fitted first. Next the plugs and points were cleaned and set. Various electrical terminals were cleaned and after I still couldn't get the Dodge to fire, a new condensor was fitted. This seemed to fix it and I got the engine running. I'd dated the old condensor 2014 before fitting it, so it's had a few years of use. The new one was a 2018 purchase and has been sitting in the spares tub.

The oil bath air filter was removed and a cotton strip 'gasket' wound around the base tube, as it drips from here onto the manifold and exhaust. After refitting it, I left the engine running for some time burning off this oil. 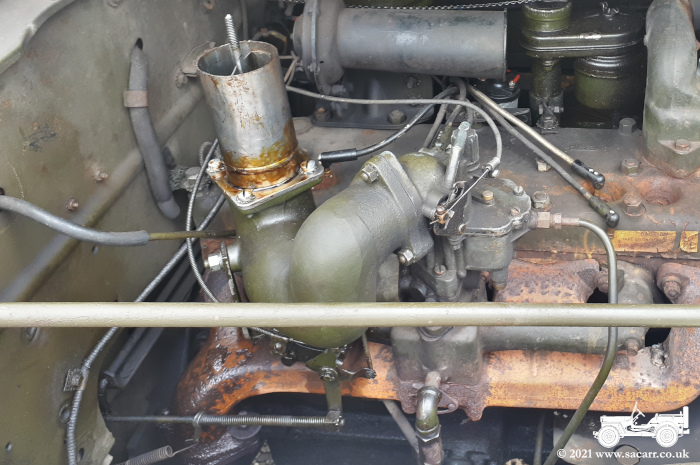 After that, I switched off and went for a coffee, to see if it would restart after a break. All the temperatures and pressures seemed in order. 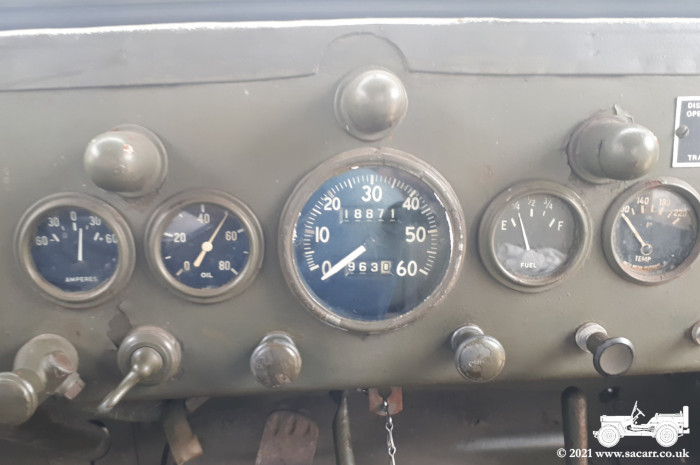 Anyway, the engine did fire up after the coffee break, so I made a short trip up and down the drive to check the engine would pull under load. All seemed well, so I fitted the "Dodgecam" and went for a local four mile drive. 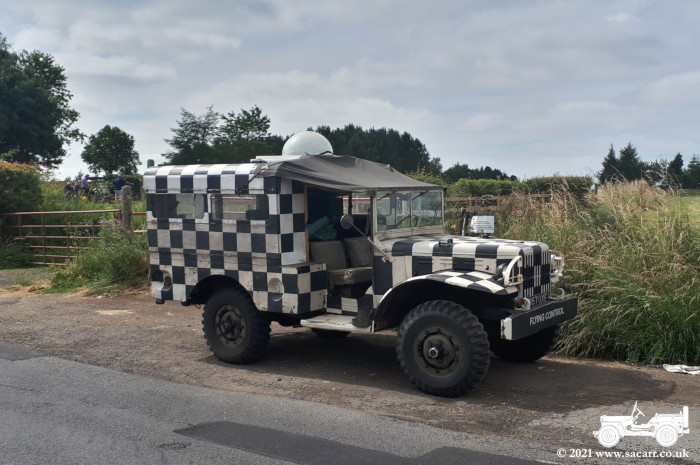 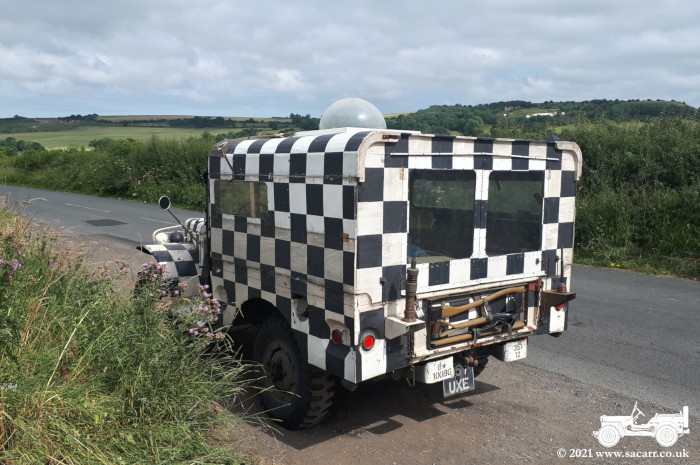 After I parked up, I made a thin aluminium shield to cover the manifold where the drips happen. It's not a permanent fixture, just something to pop in place when I park up; same as the rubble sack over the cylinder head to stop rain water dripping through the hood hinge and filling the spark plug depressions.

I now need to see if the Dodge will start after a day or so sitting, as I want to take it to the Fishburn fly-in where I'll park up on Saturday and bring it home Sunday evening. I still haven't decided whether the 15+ year old battery is perhaps on its way out.

It was nice to be behind the wheel again.
Steve Carr

Great video of "Faith" touring your neighborhood, thanks for posting.
Steve
Top

Thanks. I left the Dodge until Monday afternoon and then tried a restart. All was well and it fired up no problem, so it would appear that I'm good to go for the Fishburn Fly-In in mid August. Bar one month, it will be almost two years since my "Follow Me" Jeep and "Flying Control" Dodge were on show together. It will be nice to do a full Flying Control display again.

My two Jeeps have both still been busy this year with three real 1940's events so far and seven other photoshoot outings, singularly or as a pair. I think we've another five 1940's events confirmed for the remainder of the year, so considering the country is still working its way out of covid, it will have been a reasonable year for outings. Hopefully 2022 will be fully back to normal for events and the shows that cancelled for a second time this Spring will return as usual.
Steve Carr

With the Fishburn Fly/Drive-In just a few days away and a sunny morning, I got to work servicing the Dodge. It had been a couple of weeks since I'd done the plugs and tinkered with the ignition, but even without a charge, it started at the second press of the starter. It was run up to temperature to warm up the oil, then stopped and the sump plug pulled. 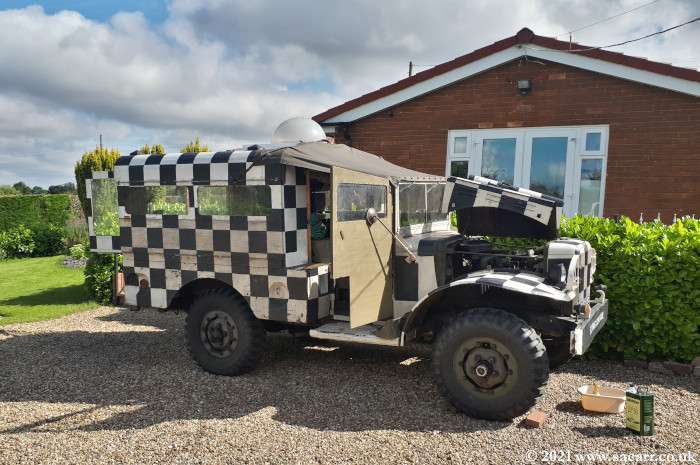 While the oil was draining, I started greasing everything. Transmission oils were checked and topped up while I was under there. It wasn't long before the gun was empty and needed refilling. I learned a while ago, that when filling the grease gun, it was worth putting a locking bolt in the hole next to the plunger. If you are filling it with more grease and knock the plunger, the spring pulls it in and will launch the grease out of the open end. A bolt in the hole stops the plunger from slipping ( it only happened once years ago and fortunately, there wasn't much grease in the gun at the time! ). 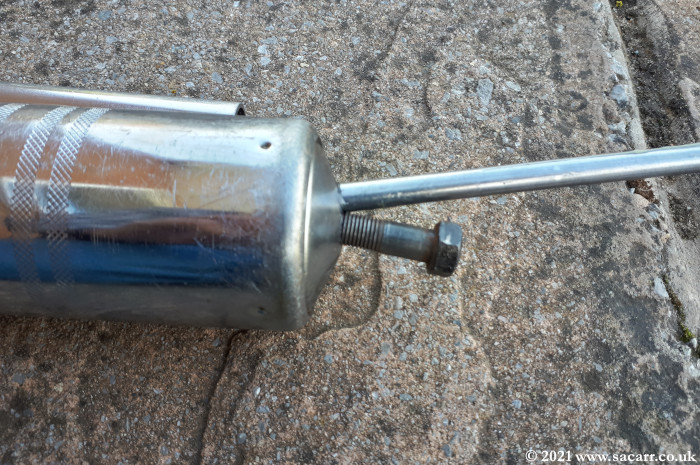 I thought my phone was in the cab, but it had actually fallen out of my back pocket, screen down, onto the gravel drive under the Dodge. While crawling around trying to grease everything, I managed to force it into the gravel. When I found it, I thought I'd crushed the screen, but I was lucky that it was only the screen protector that I had well and truly destroyed. The phone will live to call another day! 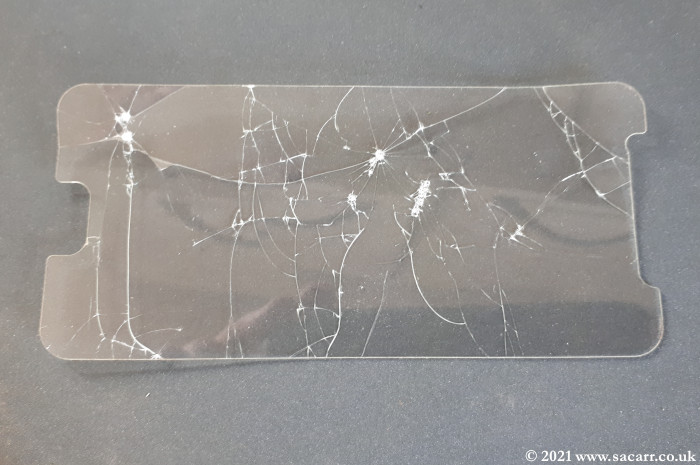 Not too long after I finished with the Dodge, the sky went dark and the rain came hammering down again. You can see splash/impacts on the roof of the Dodge like meteorites hitting the Moon!! Anyway, I think we're good to go and the weather looks to be sunny, so it will be a Flying Control pair on show. 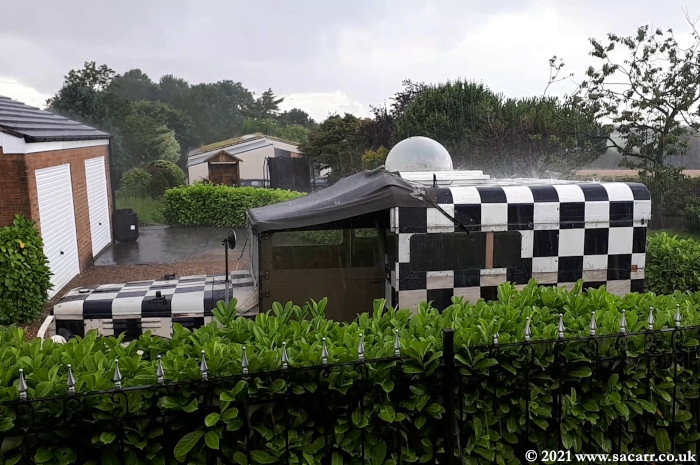 The weather looked good for the first day of the Fishburn event, quite windy, but bright and sunny. It was Faith's long awaited return to public life, having last been on show at Tanfield Railway in 2019. We were due to be there around 09:30hrs, so I had Jessie and Faith ready by 09:00. 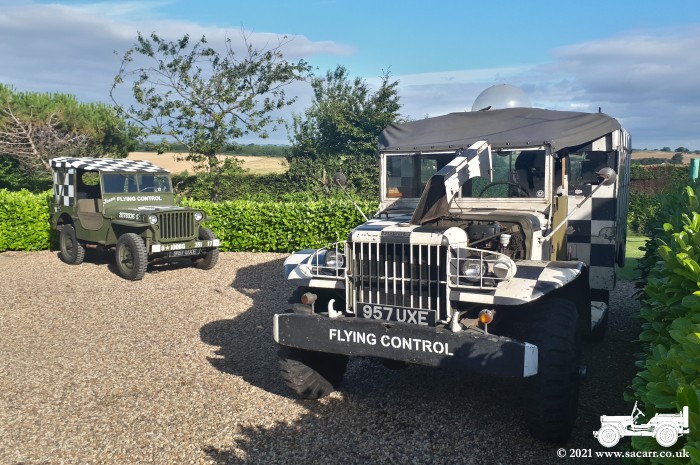 It was around a twenty minute drive to the airfield Seven minutes of the trip are shown in the video below, shot on three action cameras. One was mounted behind the screen, one in the rear body looking into the cab and one on the Jeep.

Dodge and Jeep Video to Fishburn

Here's the pair, along with a friend's 2nd Tactical Air Force Jeep, shortly after parking up. 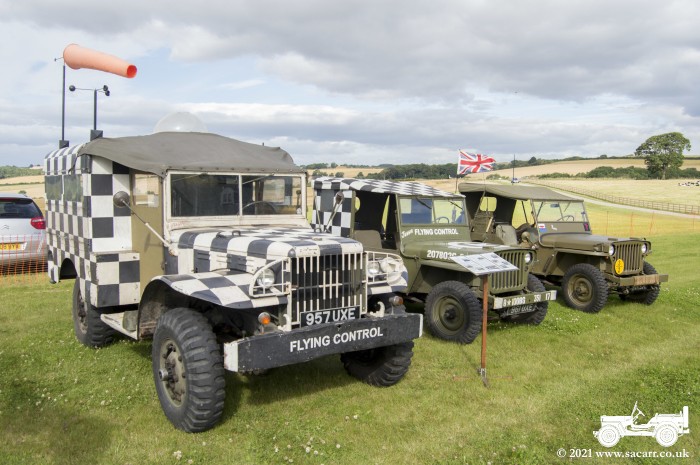 Here's the military line up, with my two at the far end. Just after the Land Rovers is a three quarter size Jeep, scratch built on a ride on lawn mower chassis.

A few closer views of some of the vehicles. 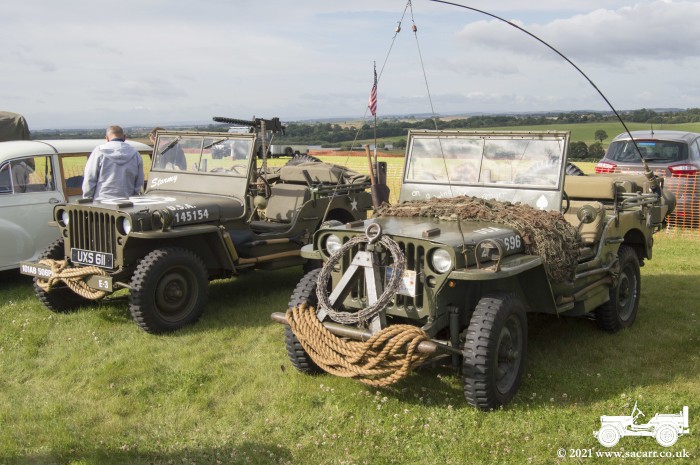 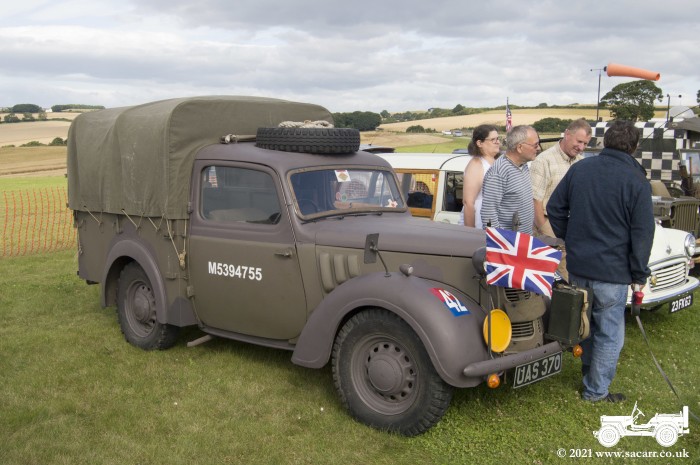 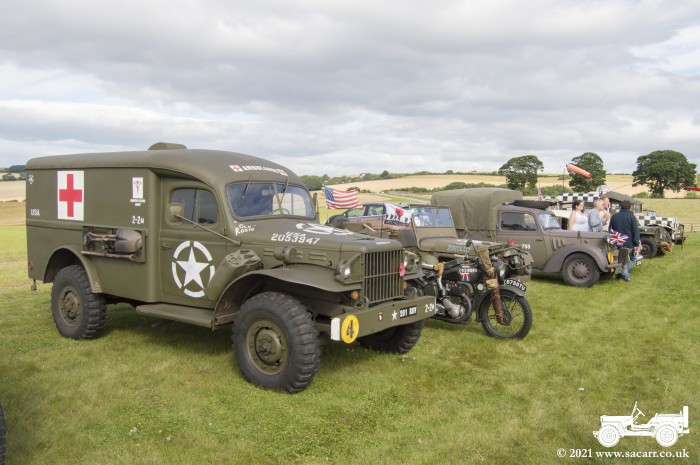 I'm not a big classic car fan so have only added a few pictures of those. 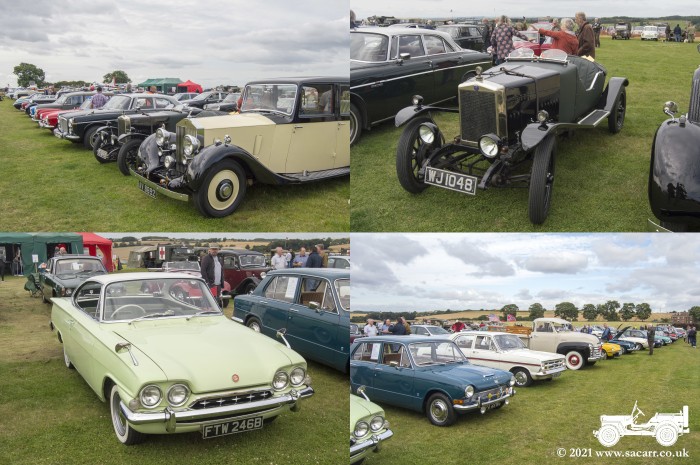 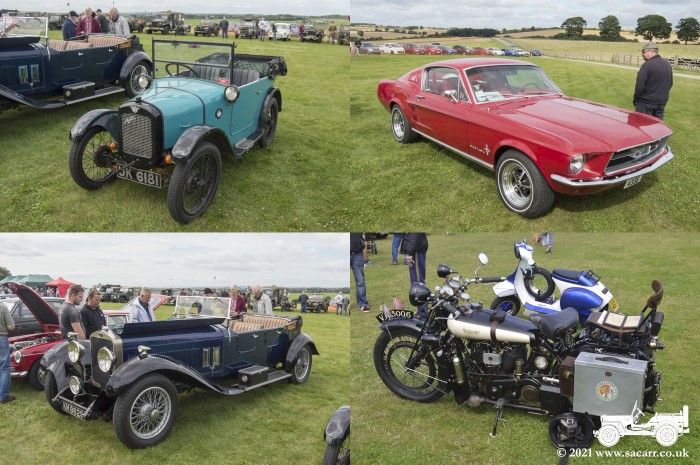 In addition to the aircraft on the live side of the airfield, there were a few static examples from the Aircraft Restoration Group on display and open to the public. 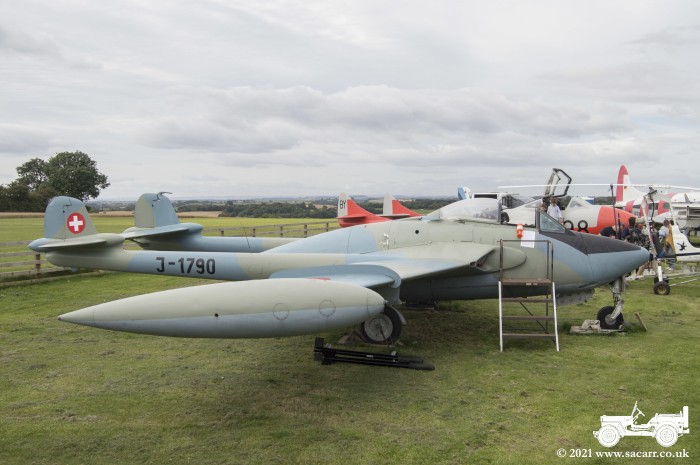 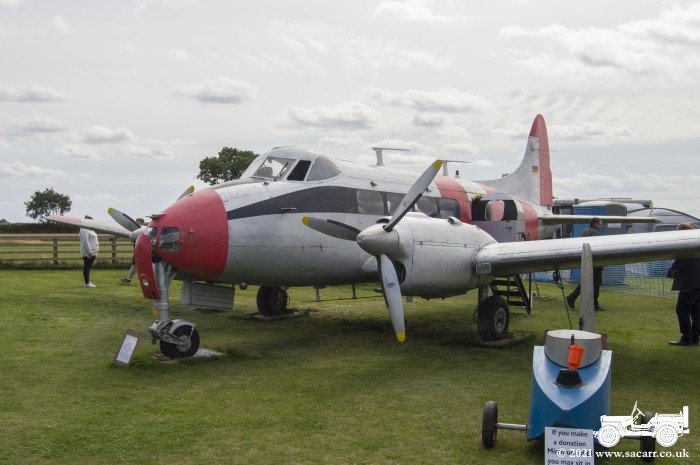 Day two was a damp day. Lynne wasn't free, so I went on my own in Jessie.
Steve Carr

Nothing is happening yet, as there's still lots of stuff to sort in the new house, but......I'm pondering.....

End of an Era!

It's funny how plans can rapidly change. We've still no word on when our builders will show up to modify the garage door openings. With Autumn and Winter just around the corner, I wanted the Dodge indoors sooner rather than later. Of course, as it stood, it wouldn't fit - the doors are too low.

After Beamish, I'd decided that after 13 years of being a Flying Control vehicle, it was time for a change. If I lived in 8th Air Force country, there would be plenty of airfield events to attend, so I'd be unlikely to make a change. However, when I got the Dodge, I was a solo act, so having two odd vehicles on my own wasn't a problem. Now I often attend events with a group of friends ( such as the Beamish show ) and checkered Flying Control vehicles don't fit in. The Jeep is an easy swap from one scheme to another, but the Dodge isn't. I also got fed up of ignorant parents telling their kids, "Oh look, that one's an ambulance". Quite why "an ambulance" would need a windsock, meteorological instruments, a flare pistol and aircraft radios escapes me!

This change opened up a possibility. If the Dodge was no longer going to be a Flying Control truck, it no longer needed the wooden body on the back. If that was the case, with the canvas roof bows removed, the Dodge should fit in the garage without modifying the doors; at least for now. The first job was to move the B-17 model from the middle of the garage into the trailer, now that we've finished using the trailer for moving from the old house. 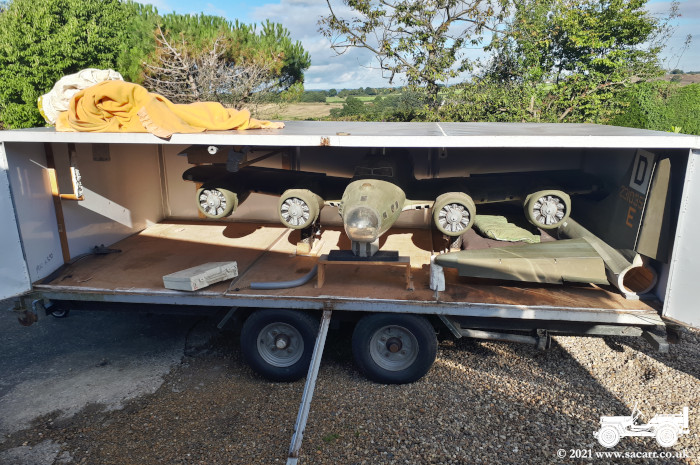 This left a space in the middle of the garage floor for the Ford GPW. It was a tight squeeze jiggling it into the centre, but that shouldn't be a problem once the doors are enlarged. 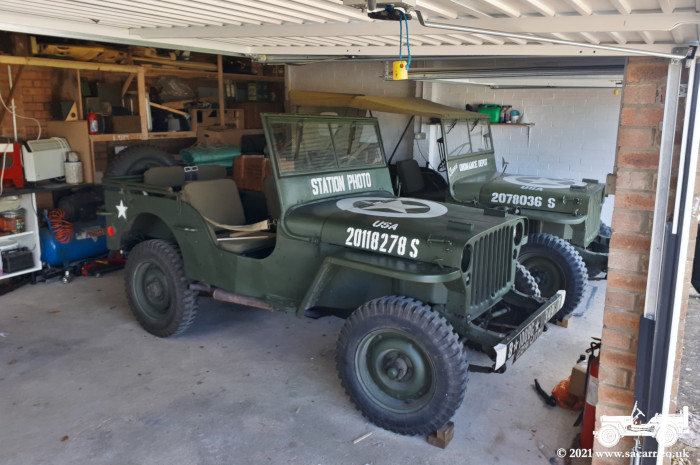