I normally browse in Chrome, but I've just opened Internet Explorer and the pictures are showing. As the pictures also show on my own websites, it must be an issue between Google Chrome and the forum software.
Steve Carr

Think I'm sorted now. I un-installed Chrome and re-installed it and the pictures are back. Whatever the problem was, it has happened since July when I last posted as the pictures worked then.
Steve Carr Nothing new to report on the Dodge front since its engine run in July. It is still in the container, up on axle stands with the battery at home. UK covid restrictions are changing frequently as cases rise in different areas so it's not worth the effort of trying to do anything with it.

Based on the rise and fall timing of the first wave of the virus, I'm wondering whether we'll get any of the 2021 season events. Certainly the first half of the year still looks under thread from restrictions. Time will tell.
Steve Carr

I went to visit the Dodge today since the latest covid lockdown eased. I shouldn't have expected miracles, as it is 6 months since it last ran due to its covid hibernation and the petrol in the tank is now at least 18 months old. Add that to a 6 volt electrical system and the best I hoped for was to pump some oil around the inside of the engine on the starter. 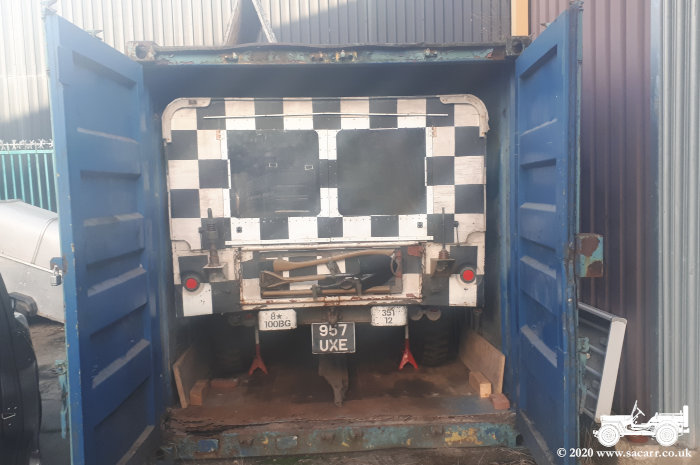 Faith the Dodge really is a miracle worker however, as after a good prime and turning over on the starter on and off to get some oil moving, the ignition was turned on and the in-line 6 burst into life once again. I did however promise Faith some new fuel and a ride out next year!! Perhaps if we are really lucky, there may be the odd event happening later in the season.

I'm glad to see your Dodge is ready to go when needed. Looking forward to next year, Hopefully you will be able to make it to some events,always look forward to your posts.
Steve
Top

Each of my vehicles have their own websites with a common event gallery, so all the latest news and reports gets uploaded there first - https://www.sacarr.co.uk/mymvs/mymvs.htm
Steve Carr

Thanks Steve, I'll check it out.
Steve
Top

Back in September, we had a Jeep trip out to Hett village, where we'd spotted a Nissen hut being used as the village hall. We found it as a result of a casual house hunt and spotted the hut while checking the surrounding area on Google Earth. The house hunt wasn't a serious search for a new property, as Lynne really just wanted a kitchen with a little more space. We just wondered what was out there. It turned out that nothing was suitble and we ended up putting a deposit on a new kitchen for our current house. On the last day of October, we actually found a suitable house in a Durham village, much to our surprise. We had an insane list of requirements. In early November, just before the second UK covid lockdown, we managed a viewing and placed an offer the same day. It was accepted. Needless to say, we cancelled the kitchen makeover!

Our solicitor just informed us that our move date would be February 24th! So what does this all mean for the vehicle fleet?

Well, the new house has a large double garage. I'm planning to raise one door lintel by three courses of bricks which should allow the Dodge through the opening, plus both Jeeps and the Jeep trailer all together under one roof. This will save me money on the current Dodge storage and make looking after it more practical. There should also be room for shelving for all the camping and 1940's gear. I plan to build a trailerport on the side of the garage to keep the aircraft/flatbed trailer under cover. The trailer used to live in the garage until I got the second Jeep in 2012 and has lived on the drive since then.

The two Jeeps and Roset trailer will be among the first belongings to move, as this will leave the current garage empty. This will make it easier to strip the current workshop units and benches and carry them through the old garage to load them into the trailer for moving. I'm planning on sticking my action cameras to "Jessie" for the trip over, to catch a few pictures of the journey for my website. My first Jeep rides of 2021 are just a week away and hopefully the Dodge won't be far behind. The move will be its first trip since September 2019!
Steve Carr

Our house purchase did complete on February 24th, so my first drive to the house was in the Jeep! 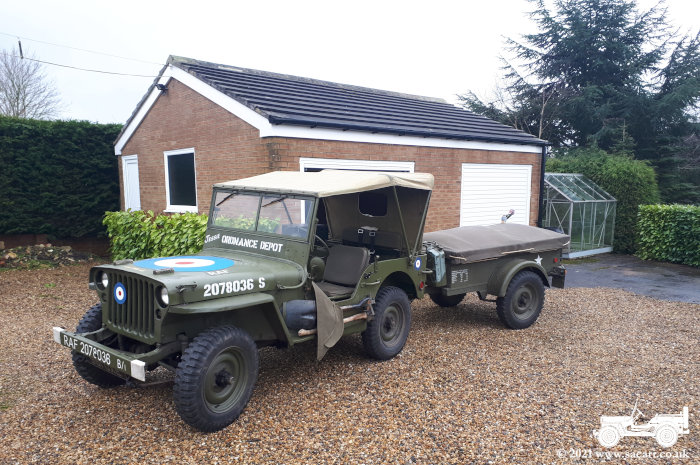 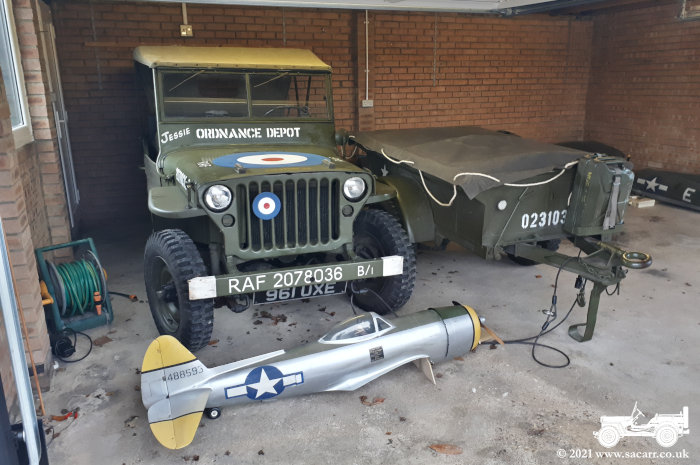 On Thursday 25th, the GPW was driven to the new house. 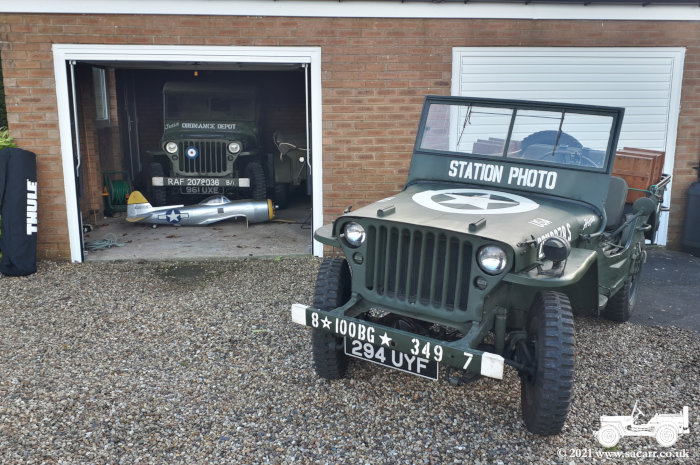 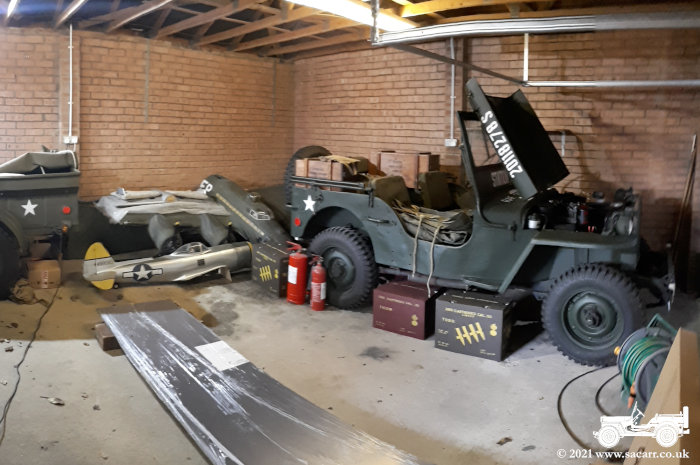 Now we're here, both garage doors are quite low, only just tall enough for the Jeep with the roof up. They won't fit the Jeep with the Follow Me light box on the top of the bows. So we are now thinking we may modify both garage doors, raising them both and possibly widening them too. The Dodge isn't here yet, but I'd expect to bring it over in the next couple of weeks. This will be its first trip in almost a year and a half.
Steve Carr

A year ago today, I saw the first UK covid lockdown coming and "Faith" the Dodge was jacked up and placed on axle stands to sit out covid. As the rent on the storage yard ends with the new tax year shortly, tomorrow we plan to wake the old girl up after her long sleep and drive over to Durham in preparation for the modification of the garage doors at the new house. A few weeks of wrapped up in tarps and then hopefully garaged with the Jeeps. 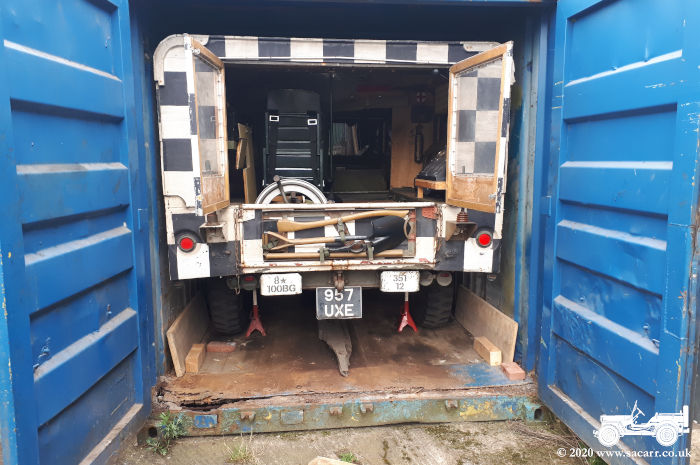 Faith the Dodge joins the Fleet at Durham - March 22nd

Today, March 22nd 2021, it was time to bring Faith to the new house, in preparation for the work on the garage to allow all three vehicles to be garaged together. The first step was to get the Dodge back down off the axle stands. After that, the 6 volt battery was fitted and the Dodge started up - now on fuel that was around two years old!!! Once running, the Dodge was backed out of the container to allow ten gallons of fresh fuel to be added through the left side fill cap. This wasn't accessible while in the container. 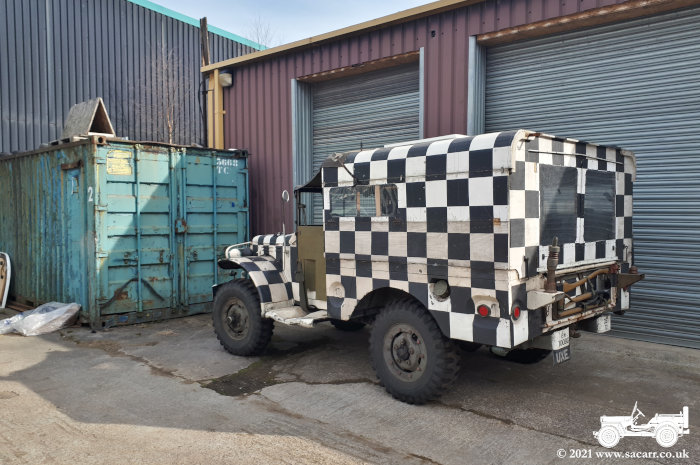 After plenty to time to warm up and load up the container contents, I set off on the short three mile trip back to out Washington home to check over the Dodge further and to blow up the tyres. That was the first short drive in 18 months. 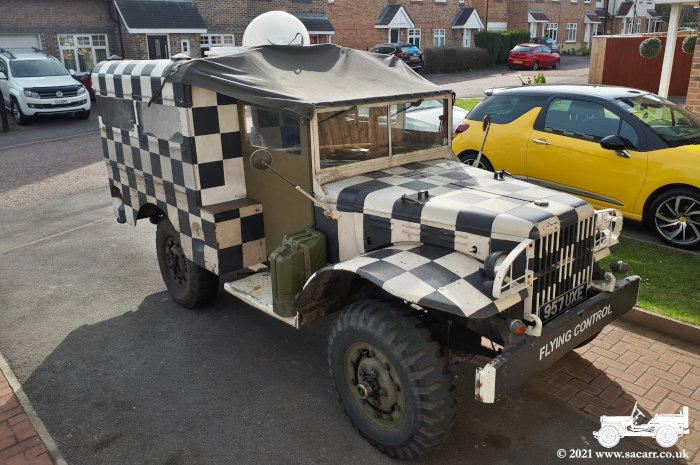 Once my daughter finished school for the day, we loaded up a few more odds and ends and began our trip to Durham. We travelled the same back road route as we'd taken the Jeeps in February. My daughter took a few shots to record the trip over which went without any problems. It was a great feeling to be back behind the wheel after 18 months off the road and 12 months and a day locked away in the container on axle stands. 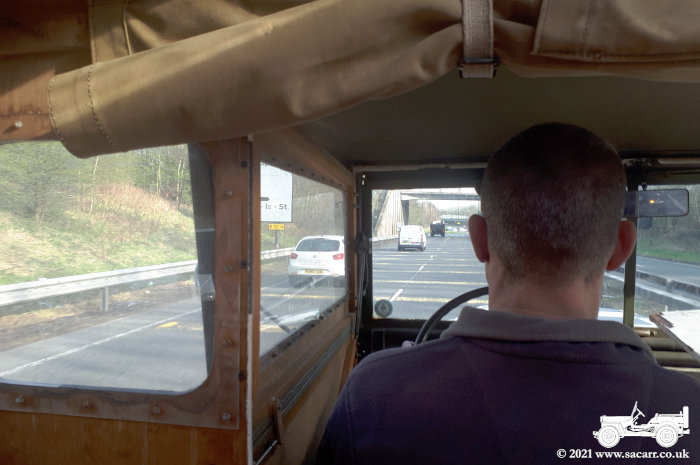 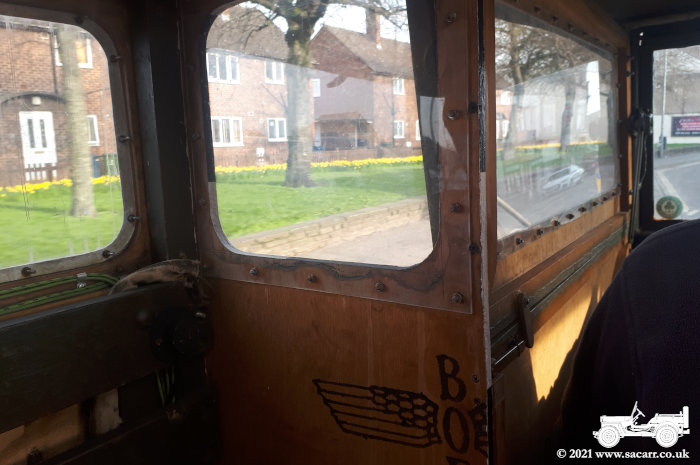 The Dodge was parked up next to the garage to check its height in preparation for the modifications to raise the doors. This will allow the Dodge to fit inside and give more clearance for the Jeep with the roof up. At present, Jessie's Follow Me sign would be too tall to fit through the door. 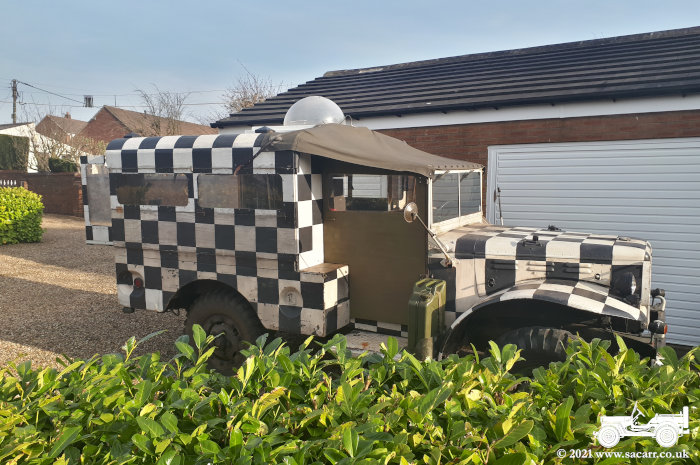 In the shot below, all three vehicles can be seen together, the first time since Bowes Railway in June 2019. 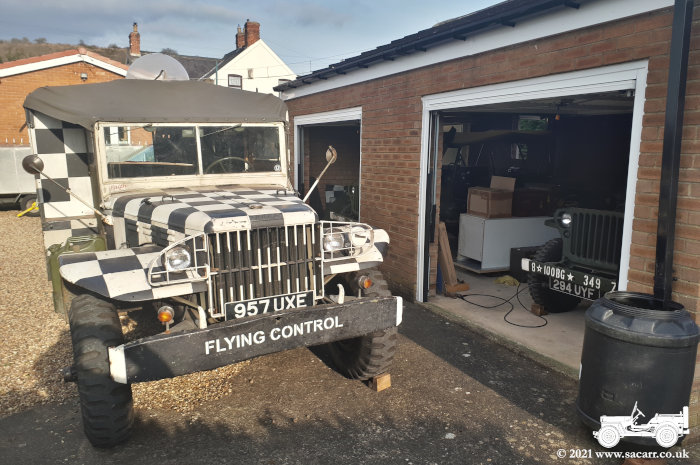 On the home and vehicle front, I'm still waiting for the builders to start work on the garage modifications. He said he would order the new RSJ to support the roof when the door openings are enlarged and expected to start soon, but due to almost three weeks of solid rain during May, he's probably running a bit behind on other projects. So for now, the Dodge is still gift wrapped outside my workshop. 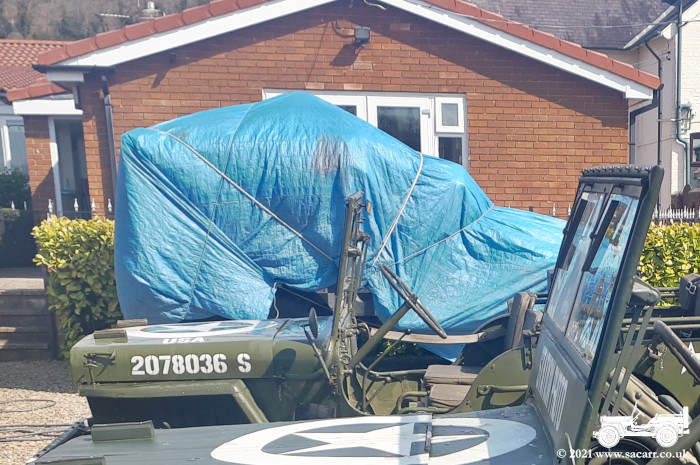 I did give it another run and warm through to temperature on Friday, plus exercised the brakes to make sure things don't seize up. The 6v battery was then removed and brought indoors for some maintenance charging. I suspect it is actually on its way out and not holding charge as well as it should. I've never fitted a new battery to the Dodge and neither did the previous owner ( to my knowledge ), so it's at least 16 years old. At rest, each cell is giving about 2.15 volts. The case around the terminals has had cracks in for years which was probably from over charging at some point in its life. I periodically clean them out and re-seal them to stop leaks. I've always unscrewed the cell caps when ever I've charged it, but left them lying loose over the holes to minimise evaporation. 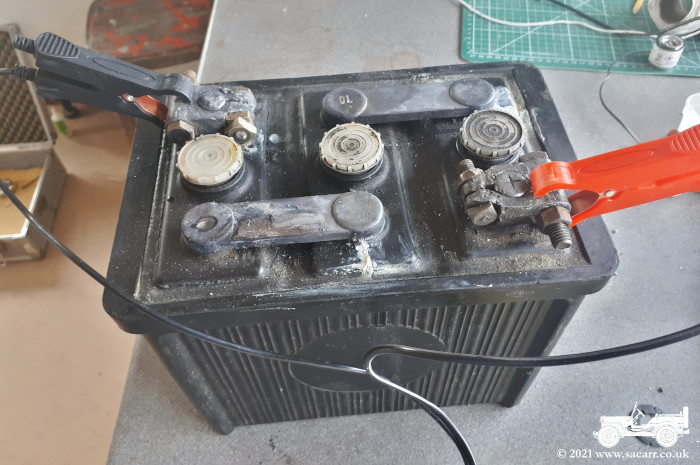 The negative battery terminal clamp bolt has also become severely corroded from leaks over the years, so that was removed, the clamp cleaned up and a new bolt found and fitted. Once the garage is sorted and the Dodge indoors, I'll probably go over all the terminals and earths to make sure everything is clean and corrosion free before I take the Dodge out again. It will also give me time to monitor the battery health and see if I need a replacement. If I do, it will probably wait until 2022. There aren't going to be that many events in 2021 and what there is I can do in the Jeeps. That will give me time to go over the truck and give it a good service and inspection after its long covid sleep. 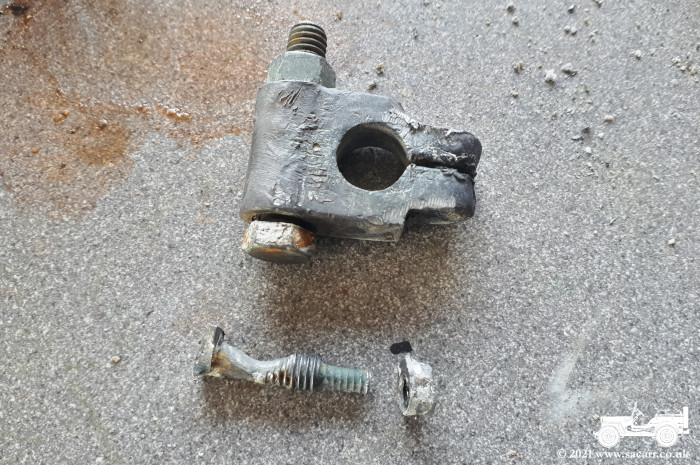 The Dodge has been under wraps since it arrived at the new house and throughout May, was heavily rained on. We're still waiting for the builders to start work on modifying the garage, so for now, the Dodge is still outdoors. However, I took the rain covers off today, which allows easier access to the engine bay. So over the next few weeks, I want to do a bit of servicing with the intention of getting it ready for the Wings & Wheels show at Fishburn airfield in August. That's only 9 miles down the road, so not too far to go. I'll probably take the Follow Me Jeep and Dodge and do a flying control display. Not sure if we'll camp, but at only 9 miles, we can leave the Dodge overnight and come home in the Jeep. With the Dodge hiding away in the shipping container all of 2020, it would be nice to try and get it to at least one event in 2021. 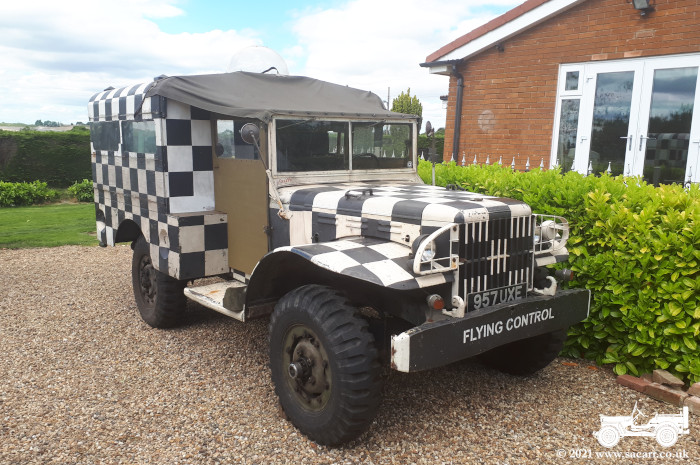 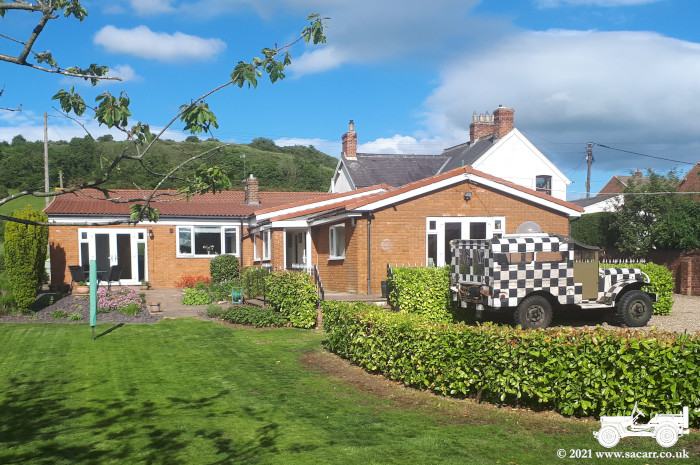