I packed up my tent straight after breakfast, as Sunday was forecast to be even hotter and I didn't want to be packing it up at the hottest part of the day. There was a huge rush of public and exhibitors through the gate at the end of the day, so a few of us hung around for a while until the traffic eased. Eventually it was time to leave, so I go to start the Dodge and it fires, coughs, splutters, revs and dies - then wouldn't restart. Just what I needed at the end of a hot and tiring weekend. 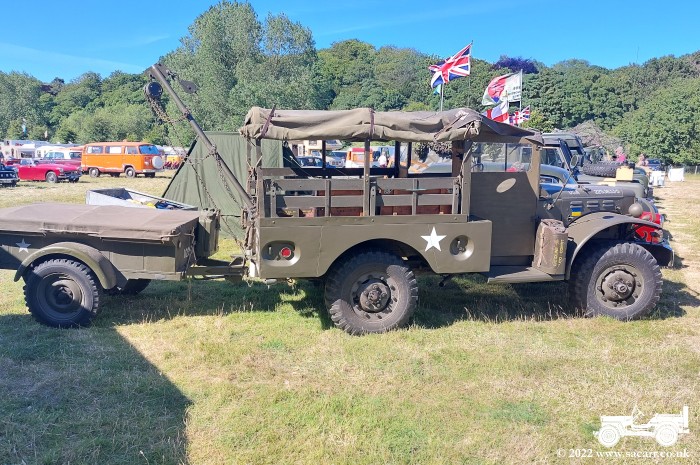 Despite only fitting a new condenser earlier in the year along with the new plugs, I suspected the condenser was the issue. There was virtually no spark at the lead or points, so the dizzy was stripped and a new condenser fitted. This time the Dodge roared to life and the idle was smooth and steady. The drive out of the site was a different route to the entrance and was a nice drive through the private estate of Lord Lambton. The trip home was uneventful. 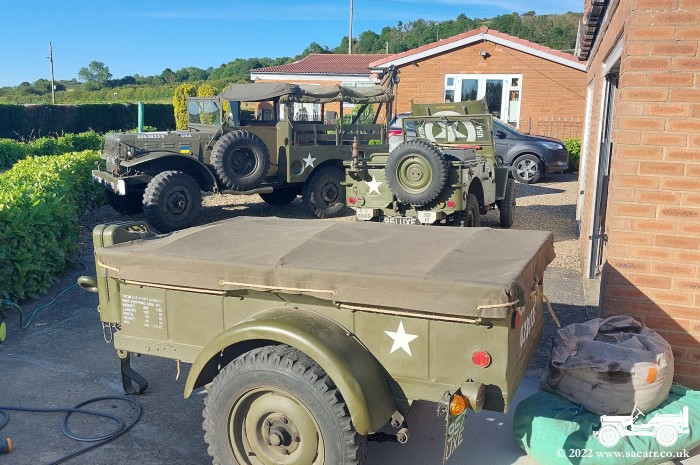 I needed another crate! No, it's not my OCD kicking in, but another requirement for 1940s camping. We recently bought a 240v generator for events like Beamish, where we are away for a longer than a weekend. During the day at events, I wanted to hide it away, but also be able to keep fuel and accessories with it in a self-contained package.

The original plan was to make a dummy Jeep engine crate, until I realised just how big that would be. It was also going to be made from recycled shipping pallets, as we had four spare. These proved very hard to dismantle on a hot day; much harder than the one used for my 50 cal crate a few months ago. They would have also added a lot more weight to the box.

In the end, I bought some plywood and strip wood from B&Q as an easier, but more expensive option. The basic ply box is 28 x 18 x 18 inches, with a 3/4 inch thick timber base. The base is only a couple of inches high, with the whole box lifting off the top. This gives easy access to the generator and accessories. 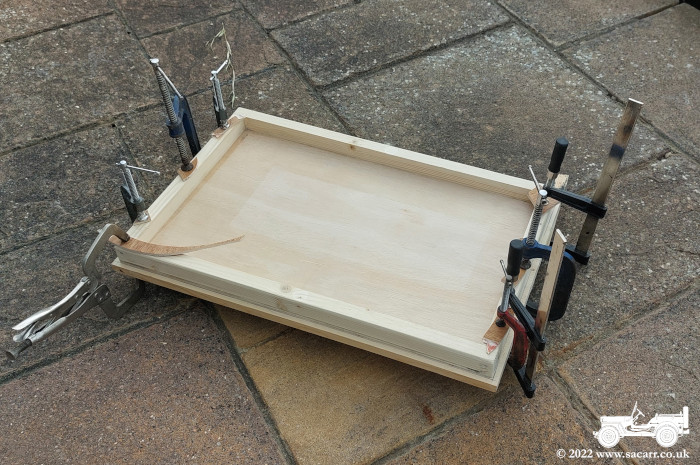 The box was both nailed and glued together, though the nails were really for cosmetic value. I cut grooves into the plywood panels to simulate 6 inch planks. The box was primed with a couple of coats of dilute waterproof PVA glue and then given two coats of olive drab; the remains of the first batch of paint bought for the Dodge. 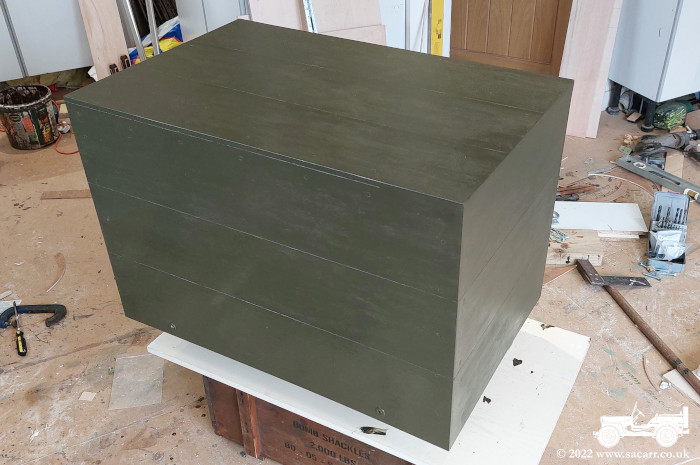 While the paint was drying, I turned to my computer to look for an appropriate looking font. I'd found a couple of pictures of an engine crate and found a font that was similar. It just needed a little editing of some letters. The markings I chose were for a replacement cylinder for a Wright Cyclone aero engine. As I said before, I was going to go for a "Go-Devil" engine crate, but needed an object more suited to the size of box I now had. 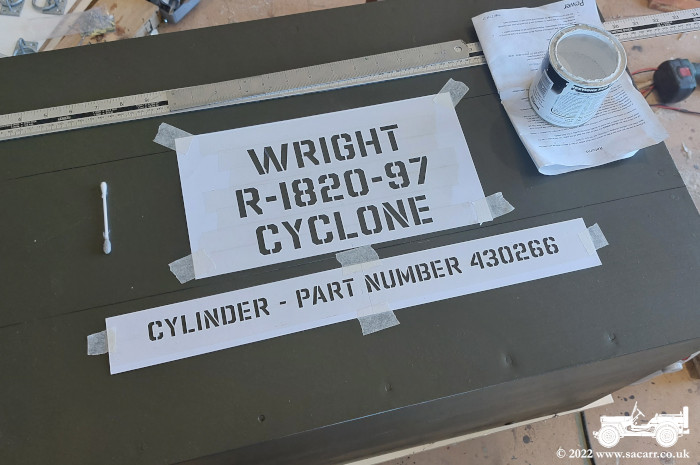 The lettering was printed onto thin card and then covered in Sellotape. This gives a smooth finish that will wipe clean and the tape helps to reinforce some of the small stencil bars that hold the letters together. I then spent a day with a scalpel, cutting it all out.

On the 17th, I was ready to start painting, beginning with the top. I began using a small piece of sponge, which was fine for the larger letters, but had to switch to an old and tired modelling brush for the smaller letters. 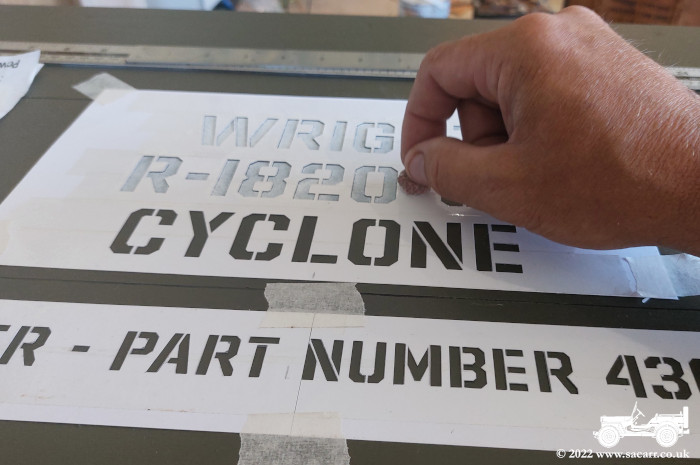 Both sides were painted next, resting the crate on two strips of wood at either end when I came to do the second side, so as not to smudge the still tacky paint on side one. 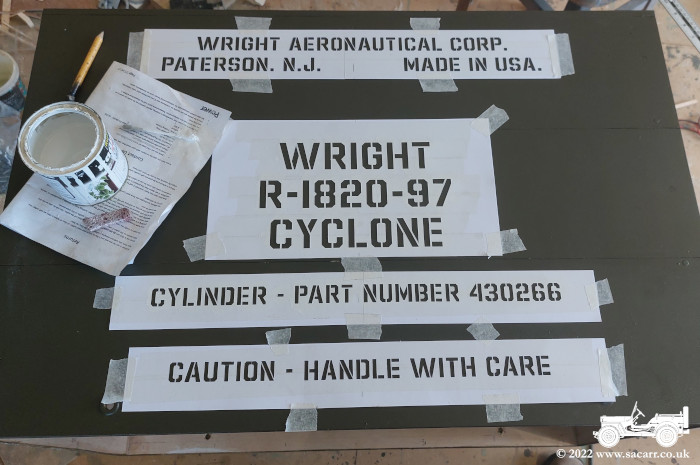 The ends were next, with the Curtiss Wright logo added too. 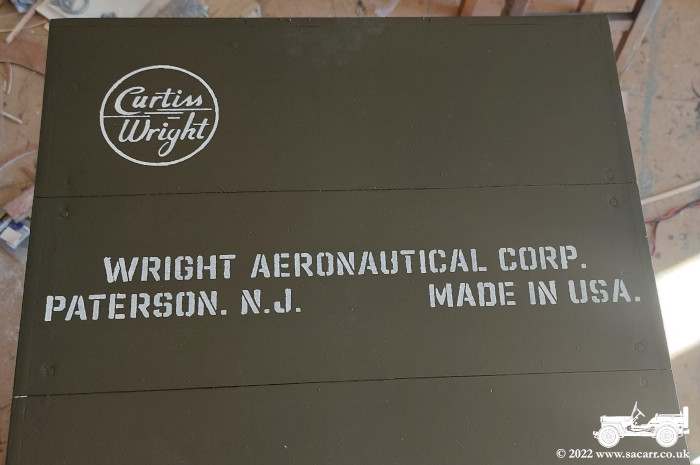 By mid afternoon, the painting was done, the lifting rings fitted and it was left in the sun to bake the paint. 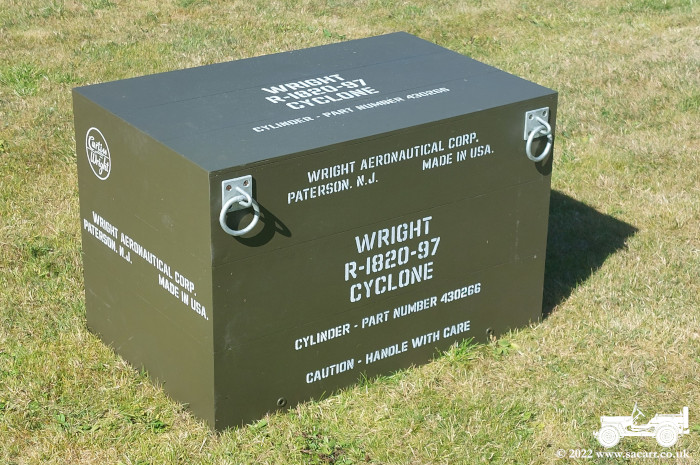 The last picture shows the base loaded up with the generator, fuel, spare oil and accessories box. Four bolts hold the lid onto the base via 'T' nuts in the base. I'll probably add some hooks and bungees, or footman loops and straps, to hold everything still inside. There's also enough room in the lid for the fridge power supply, an extension cable and RCD socket. 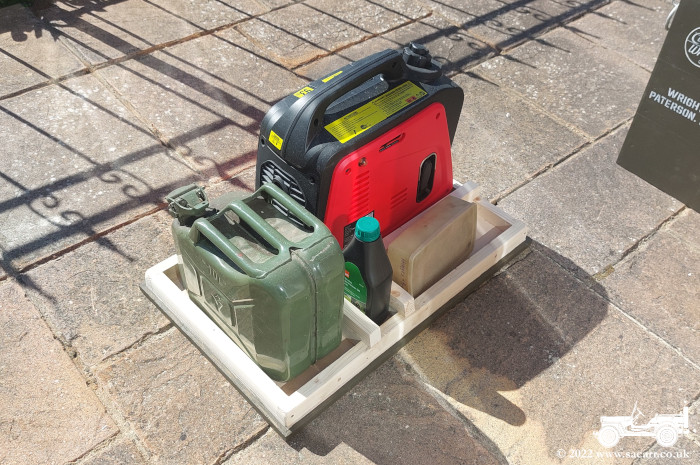 With a nice weather forecast, Lynne and I went topless to the N.E. Military Vehicle Club annual rally at Ryhope Pumping Station. The show has missed two years due to covid, our last trip there being 2019. It was only around a ten mile drive there and we hadn't been there long when a sea mist blew in, dropping the temperature. 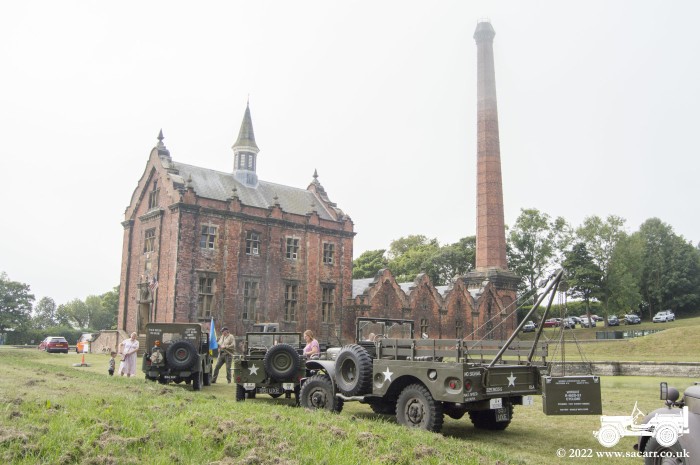 It cleared again by noon, leaving blue sky and a surprising amount of heat in the sun. So my morning walkaround pictures were a bit washed out, but the sun brought out the colours in the afternoon ( olive drab always looks good in the sun! ). 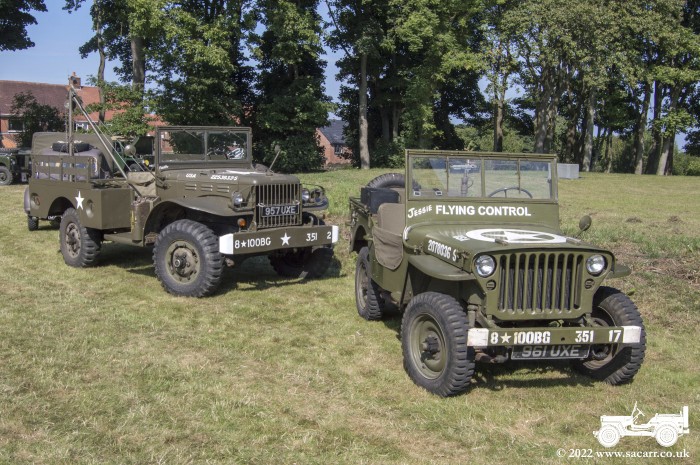 The museum was almost lost to a spontaneous ignition coal bunker fire at Easter, thankfully extinguished before any serious damage was done. The Victorian site houses a giant steam powered beam engine that was used for pumping water to the local town of Sunderland. The steam engine still operates, though now only as a museum exhibit. This is the boiler room where the fire started. 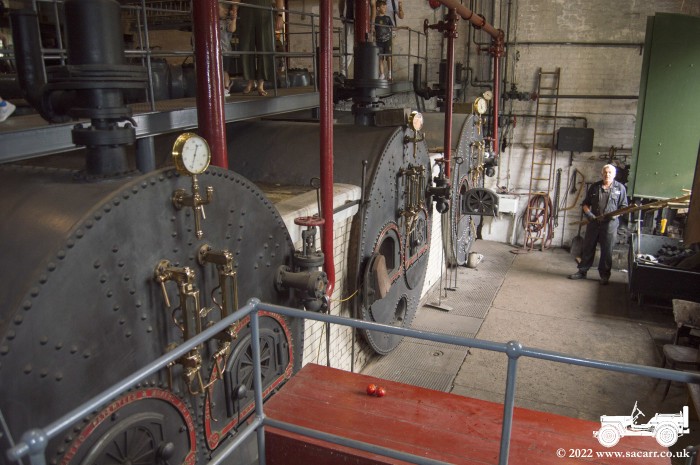 The vehicles were spread around the site, with the diorama type displays at one end of the display area and individual vehicles at the other. 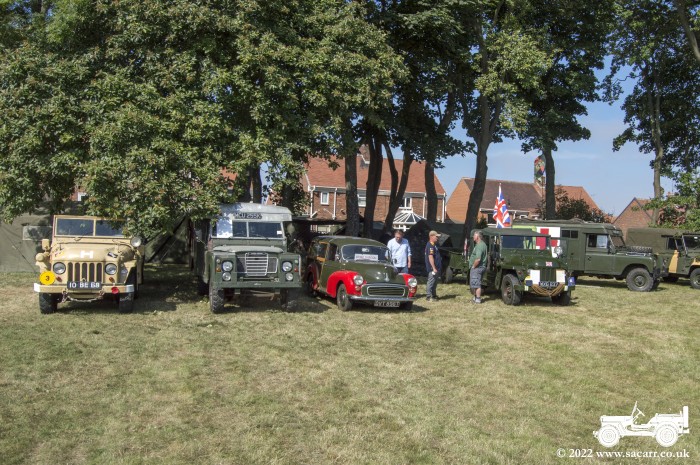 Here's a few of the other vehicles. 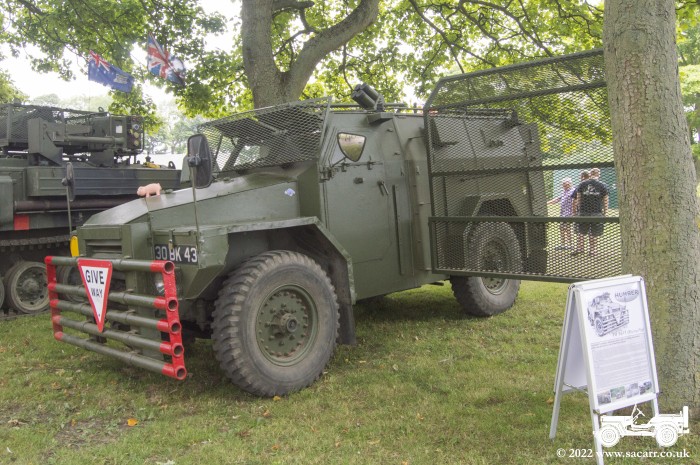 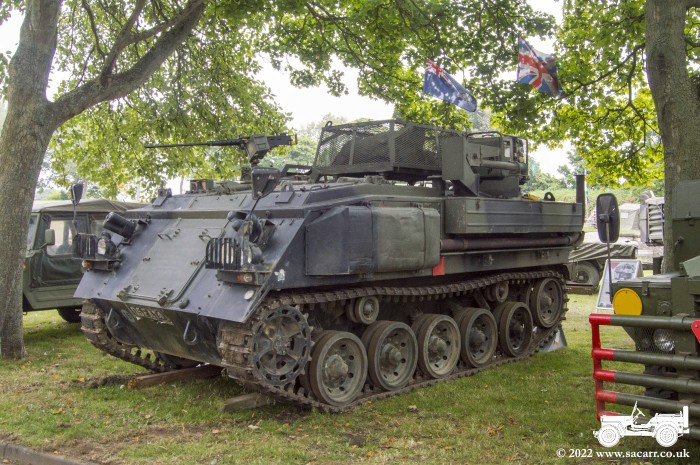 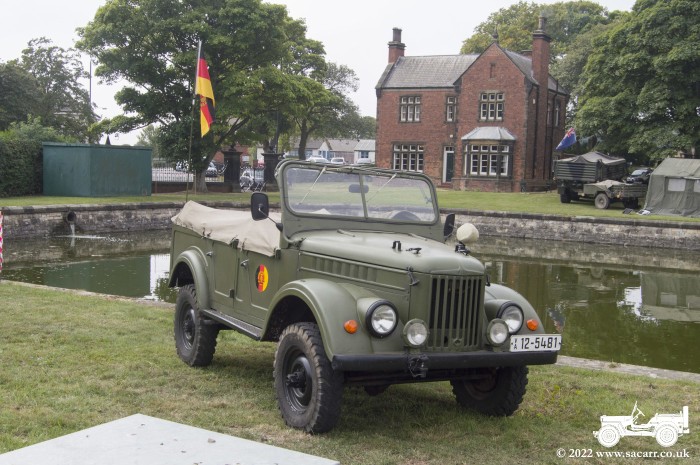 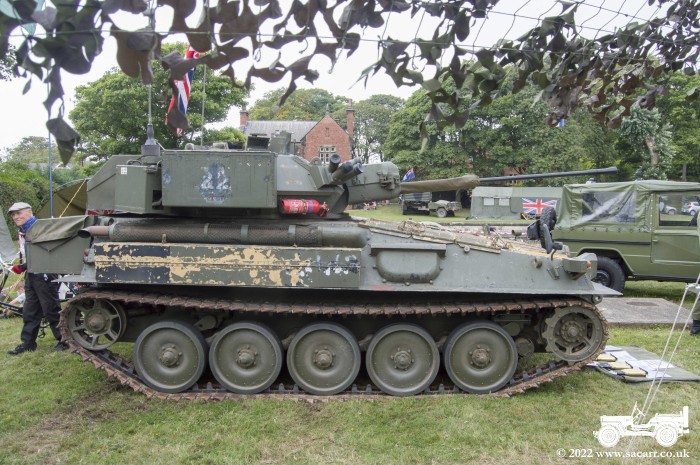 Around mid afternoon, the sun had moved around and I was able to get some nice sunny pictures of the vehicles with the trees in the background. The mist closed in again late afternoon as we were packing up, so we had a dull and more chilly drive home. We stopped half way home to fill up with fuel ready for Beamish "Dig for Victory" show in a few days time. 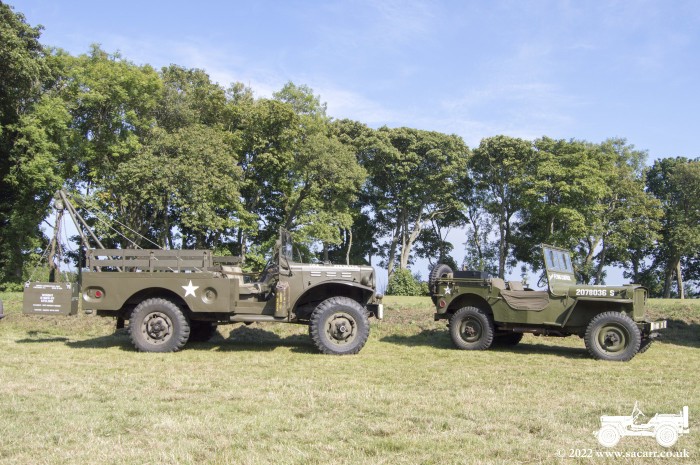 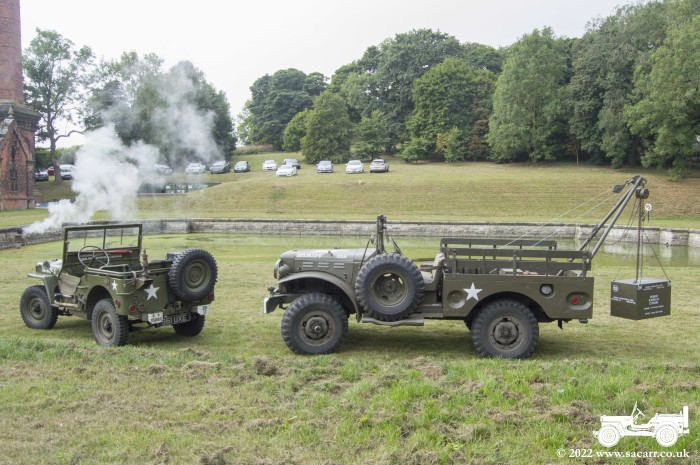 A few more pictures can be found on my website here - https://www.sacarr.co.uk/mymvs/events/2022/ryhope.htm
Steve Carr

Nice job on the crate Steve. I haven't been to an NEMVC event since they were held at the DLI museum.

The last DLI show I have pictures from is 2015. It must have closed soon after that. There was a break of a few years if memory serves me correctly and the show returned in 2017 at Ryhope, though I didn't get to that one. I was there in 2018 and 2019, then covid cancelled 2020 and '21.
Steve Carr

Beamish is a living history museum in the North East of England. Original and often derelict buildings from around the North East have been dismantled and rebuilt on the site to tell the history of the area from the 1800s to 1950s. The picture below shows the museum site with various locations numbered to correspond to the numbers on the images. 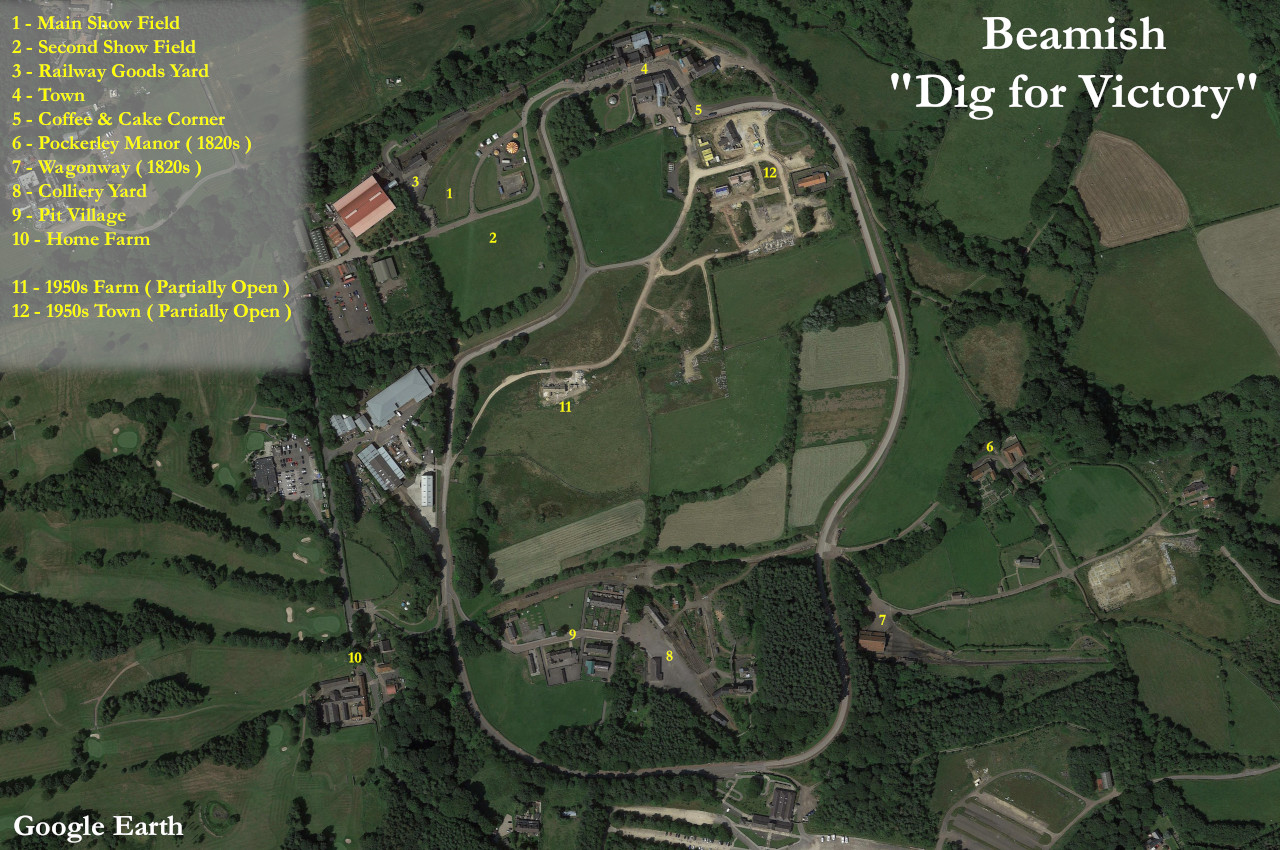 With 350 acres of rolling landscape, period buildings, olive drab vehicles and the freedom to drive them around the site; the Beamish Museum "Dig for Victory" event is a unique 1940s show in the UK.

I packed the vehicles across Tuesday 30th while Lynne was at work. As soon as she came home, we grabbed a bite to eat and set off for Beamish. We towed the Jeep so that we've have a normal car to run out for supplies. It was dusk by the time our camp was set up, so the first pictures were on Wednesday morning. 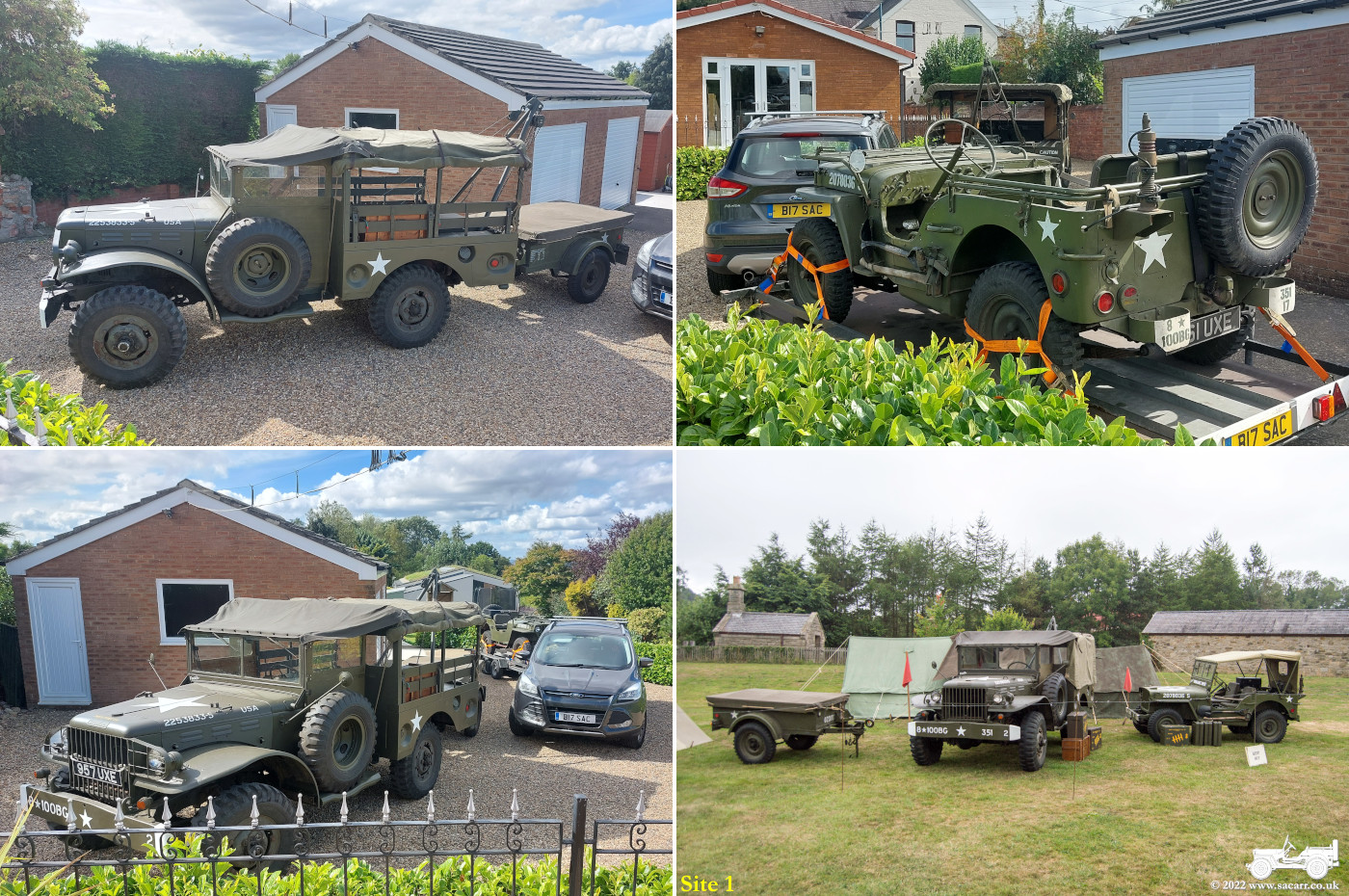 Neil, Chris and Andy were also there on Wednesday setting up our camp ready for the start of the show. Paul was there too, but staying in his motorhome in the staff car park. So six of our seven vehicles we on site before the start of the event. Chris had his Dodge. The Weasel was going to be there but had a stuck clutch. Neil's Jeep has only recently been restored making Beamish its first big show. Paul had his Jeep and bike and Andy brought his Guinea Pigs! There was nobody to babysit them at home for the first couple of days of the show. 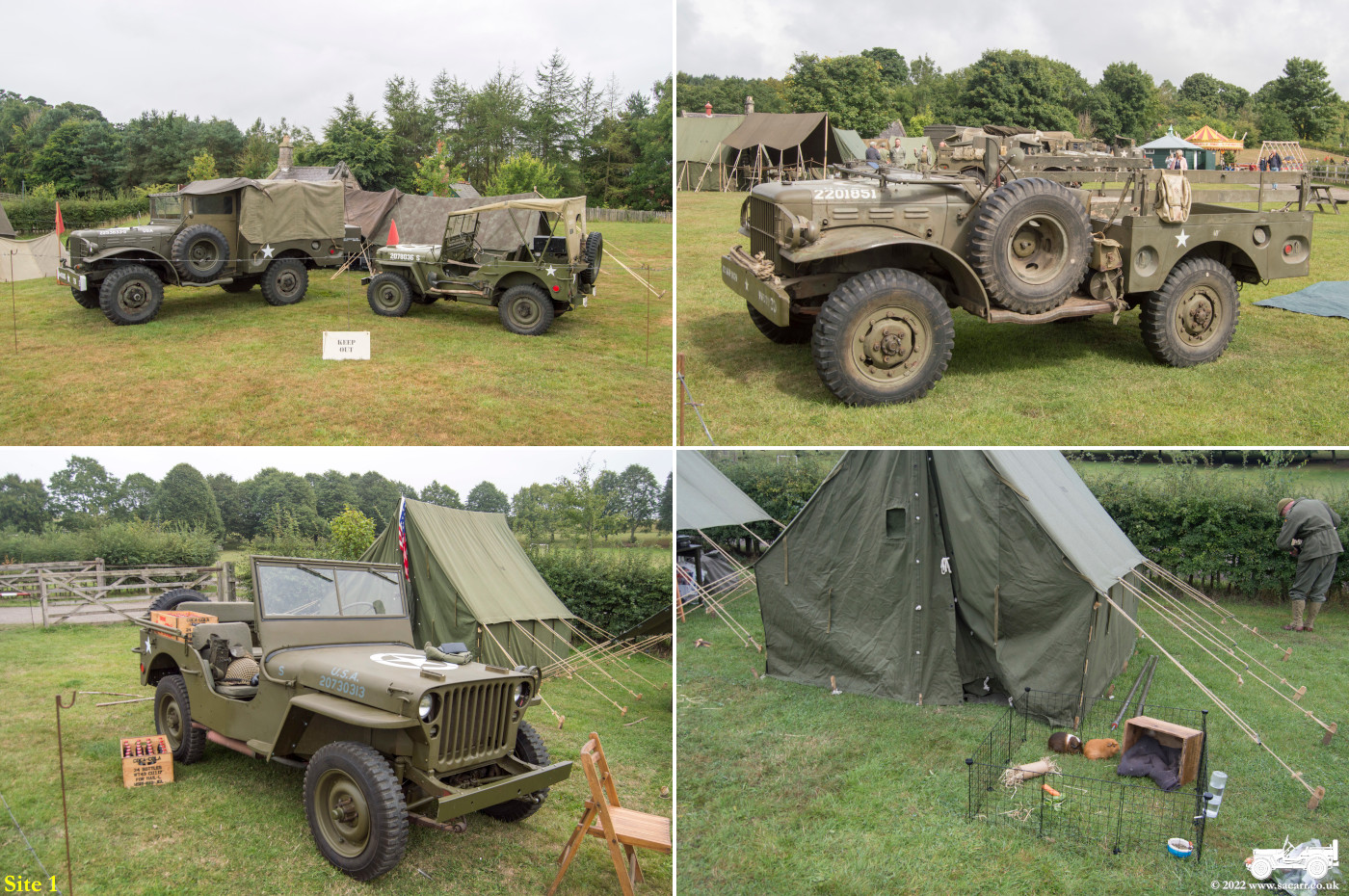 It took Chris some time to assemble the latest version of his field shower; the most refined version complete with petrol powered water heater and electric pump to send the water to the shower head. It's come a long way since the bucket with holes in. 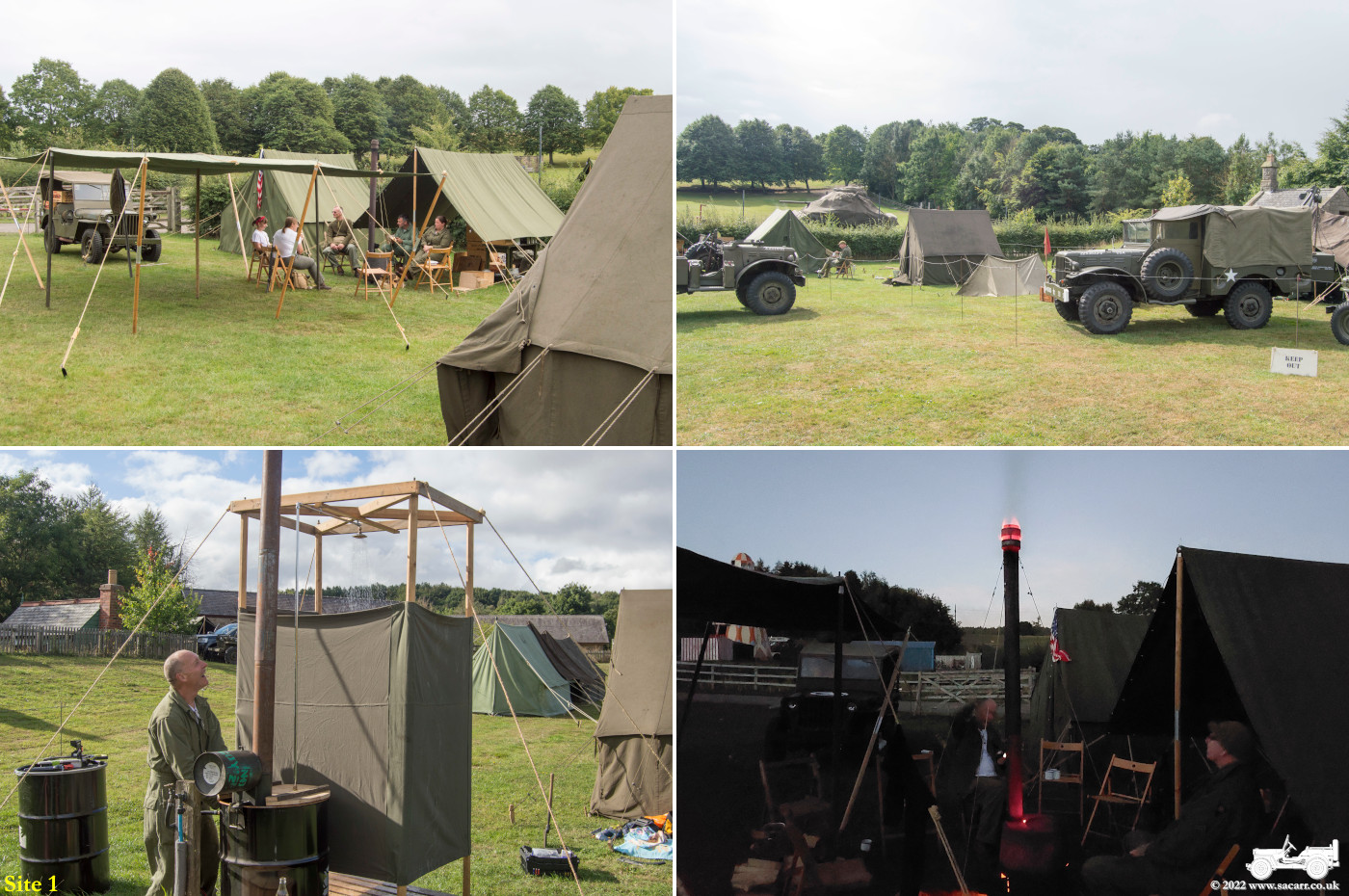 According to the forecast in the days leading up to the event, the weather threatened to be wet for the full show. Thankfully, over the five days, there were only a few showers, mostly outside public open hours and at the end, we got the tents away dry. Wednesday morning however was raining and it lasted almost until noon. We sat under our shelter, looking at different forecasts in the hope that one would give us good news! Eventually, it dried up, allowing us to explore.

The event didn't start until Thursday so there we no vehicle movements on Wednesday. This gave us a chance to have a look around the site on foot and to check out recently opened areas such as parts of the 1950s town and also the Quilter’s cottage which we hadn't seen before. It also gave us a chance to look for possible display locations that we hadn't used in previous years.
Steve Carr

The first proper show day was September 1st. After the 10am briefing, there was the first of the large convoys around the site. They are seen here in the colliery yard and passing through the pit village. 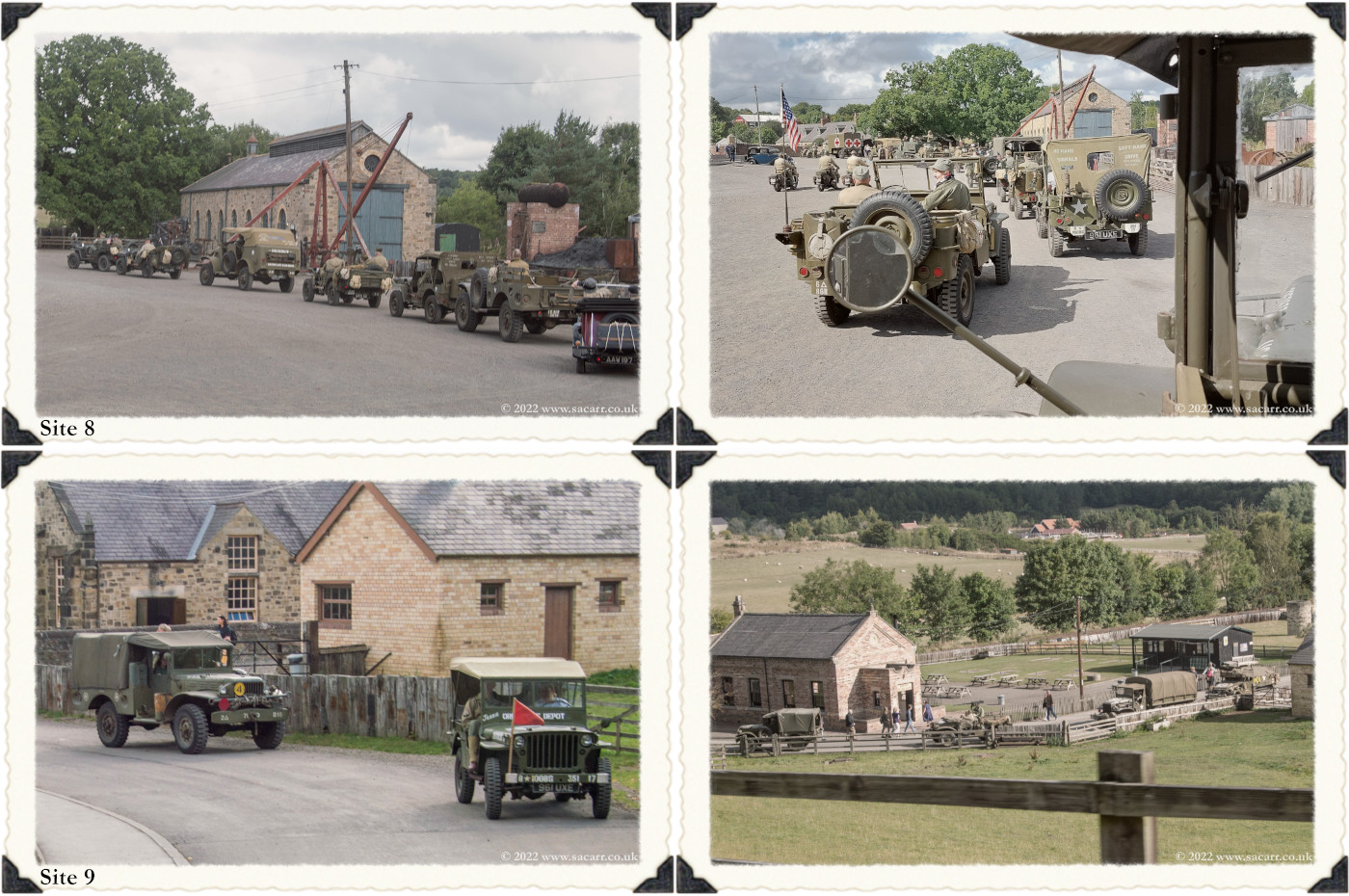 After this, following our on foot scouting, we took the vehicles to what became known as "Coffee and Cake Corner", just on the edge of town. It was a spot nobody had used in previous years and was close to the cafe and toilets - an ideal spot for morning coffee ( site 5 on the map ). 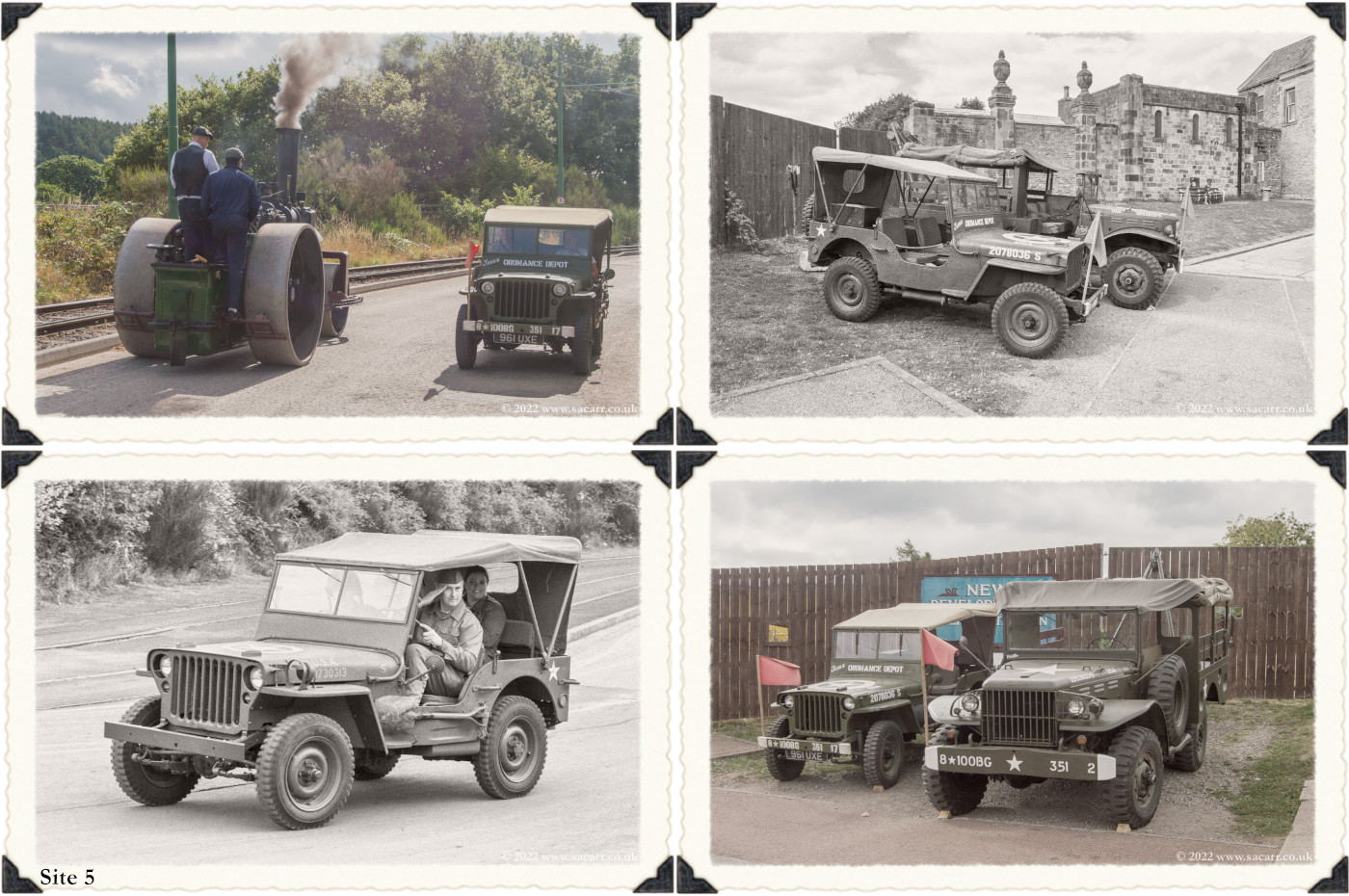 Later, we moved on into town, parking outside the Co-op. After lunch, we took the vehicles down through the pit village and into the corner of the colliery yard, near another cafe. We set up there and had a game of "Craps" until the Military Police came ( Paul ) and busted the game. 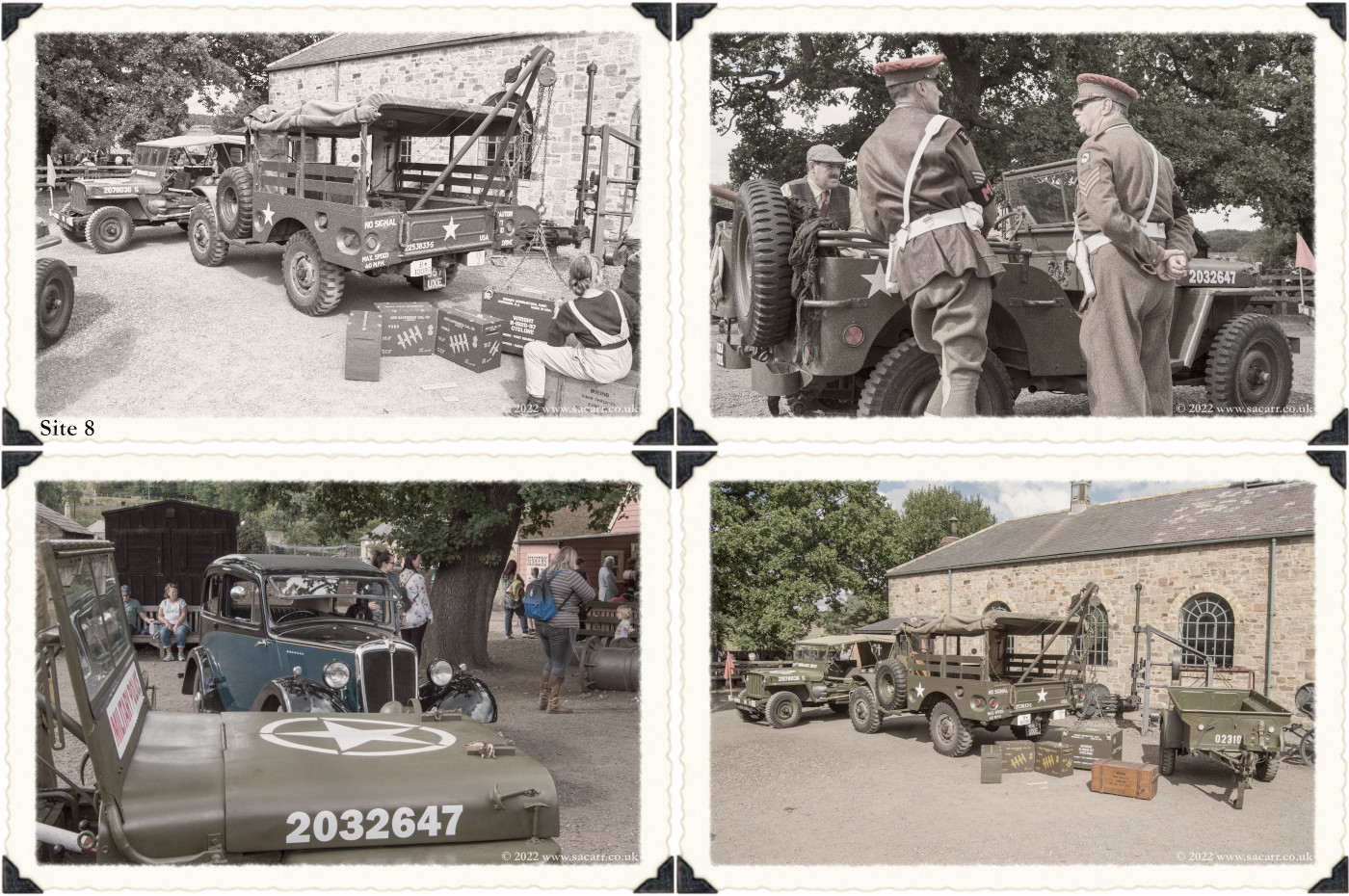 Not long after that, it was time for the second large convoy of the day, so we headed back to assembly point at the main show field. 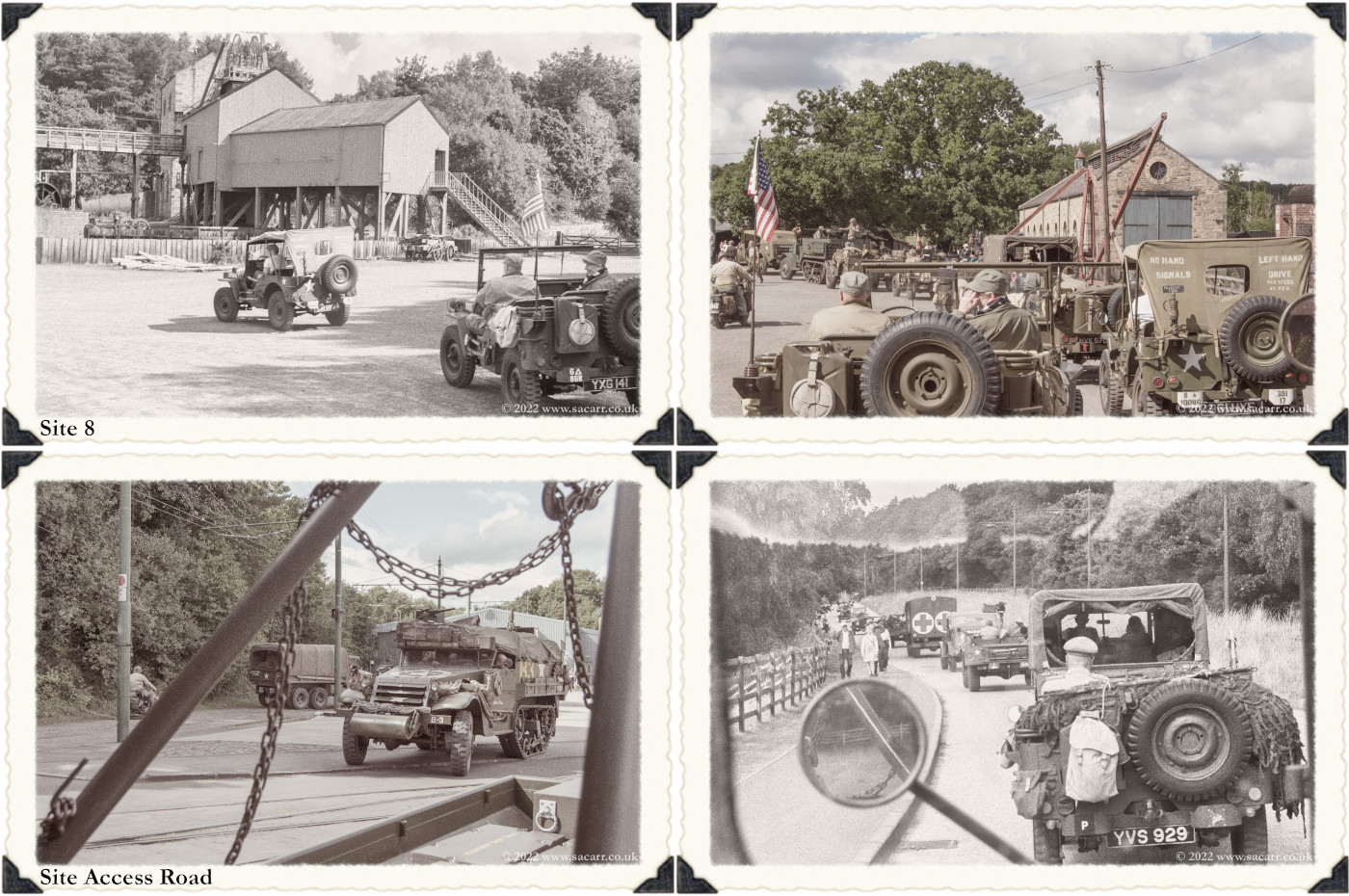 Later in the afternoon, we walked up to "Home Farm" so my daughter could do a Land Army photoshoot around the farm buildings and animal pens ( site 10 ). 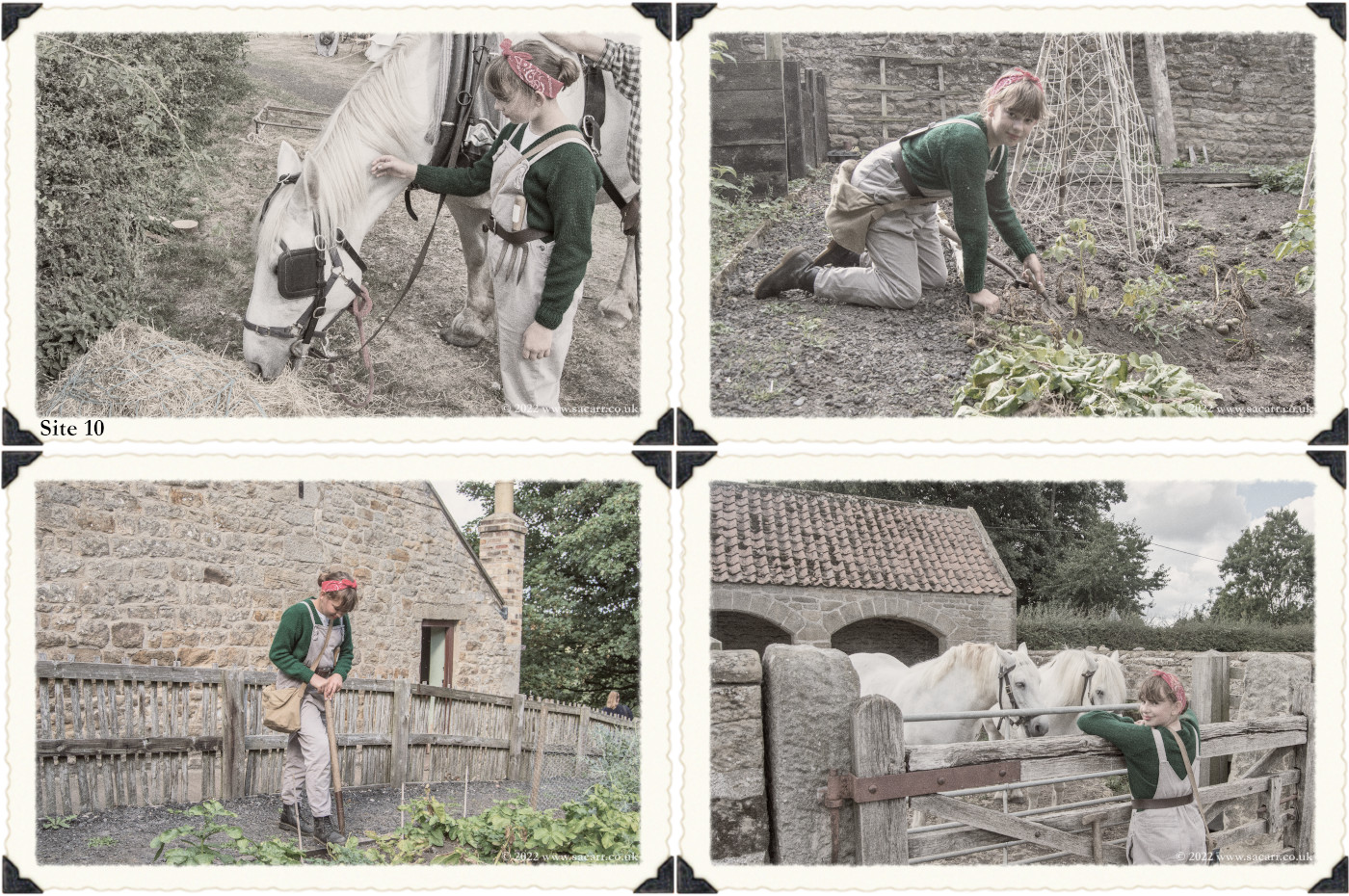 Later in the day, Andy and I took the Jeep and Dodge to the Rail yard ( site 3 ) to collect some ammunition and aero engine spares just in on the afternoon train. 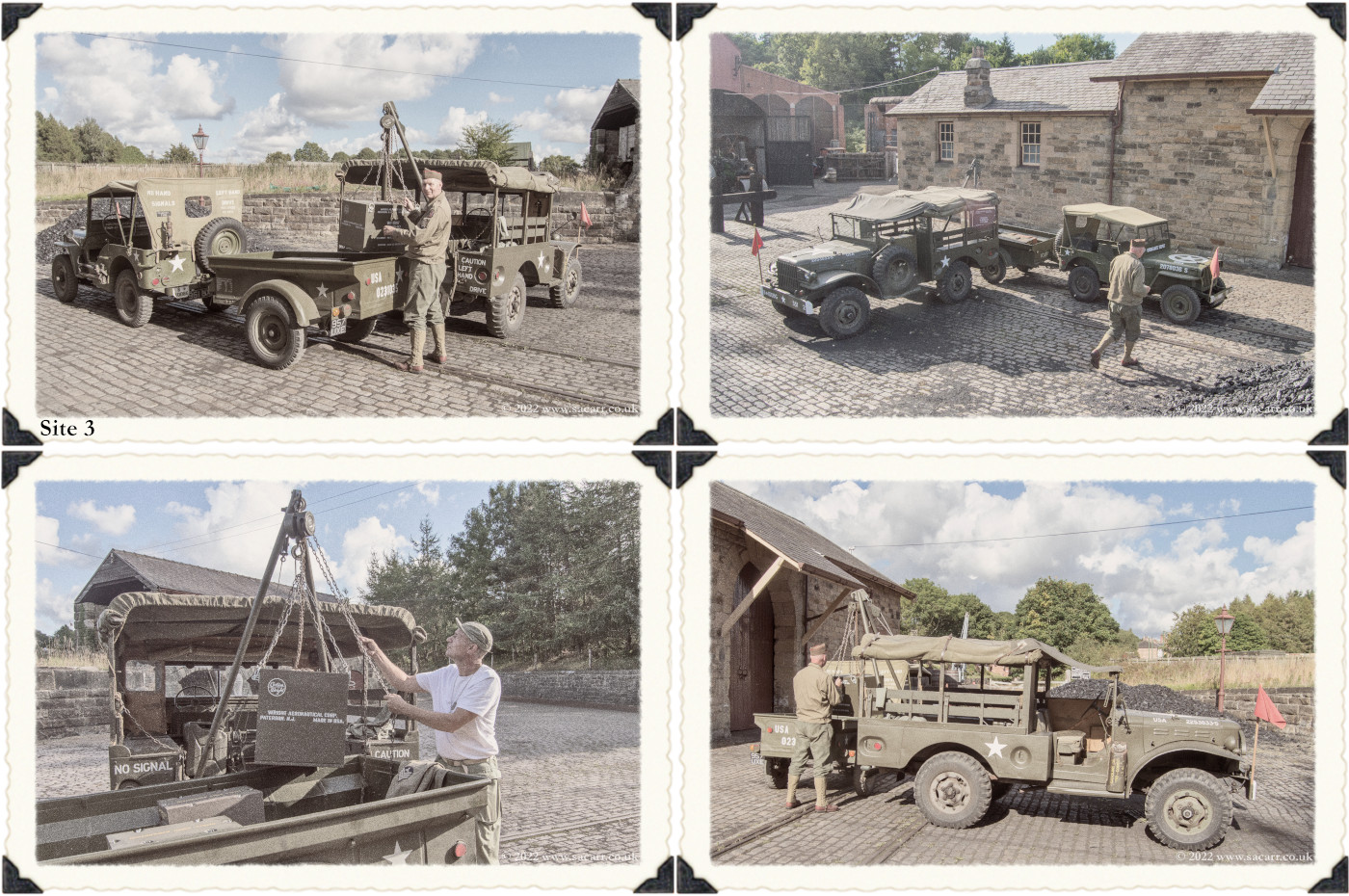