One of the most interesting displays was an air raid shelter. Along side was an officer with a tablet computer connected to some loud speakers. He was playing an air raid siren, followed by the sound of bombers, a raid with the bombs falling and the all clear signal. 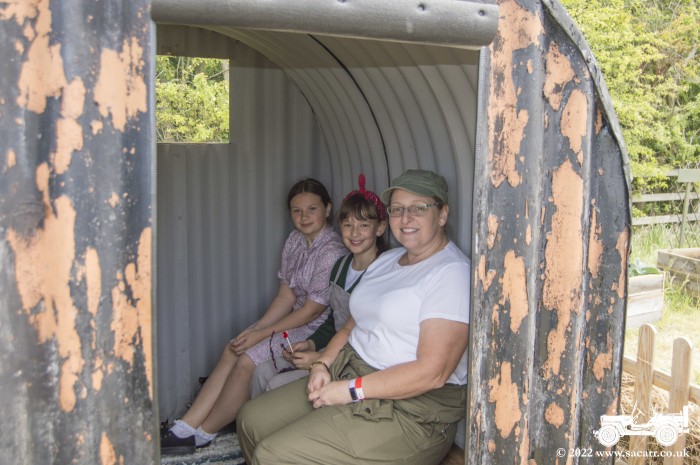 There were a number of radio controlled model aircraft on show, most of which were the usual club sized aircraft, with a few larger scales. In the car park around the community centre were a dozen or so classic cars. Inside were more stalls and displays, including a group working an RAF plotting table, recreating the tracking of a raid on the North East of England. We've seen them before at Barnard Castle. 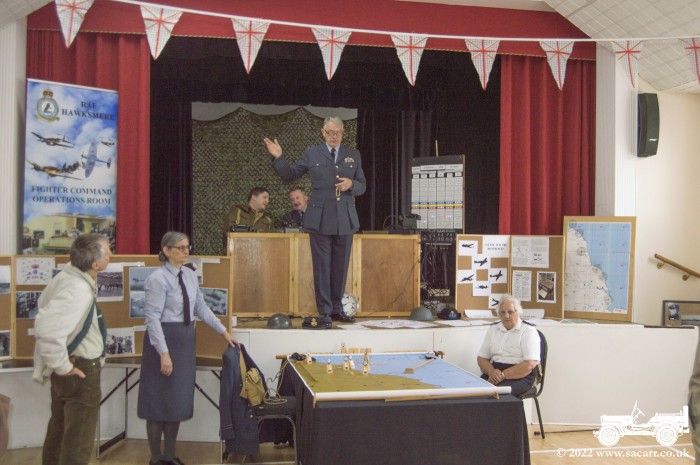 There was a huge queue for the bus back, but we spotted Chris' Dodge and Derek's Jeep parked out front, so jumped in the Dodge for a lift back to the farm. 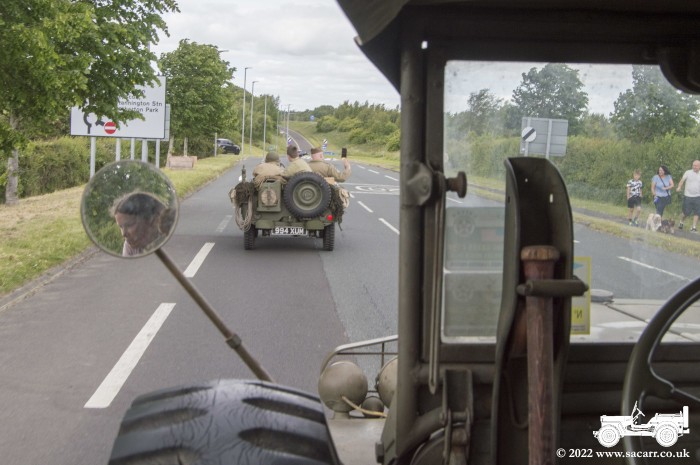 By late afternoon, we were waiting around for the go-ahead to start the convoy through the village. The other Jeeps had already disappeared by this time. 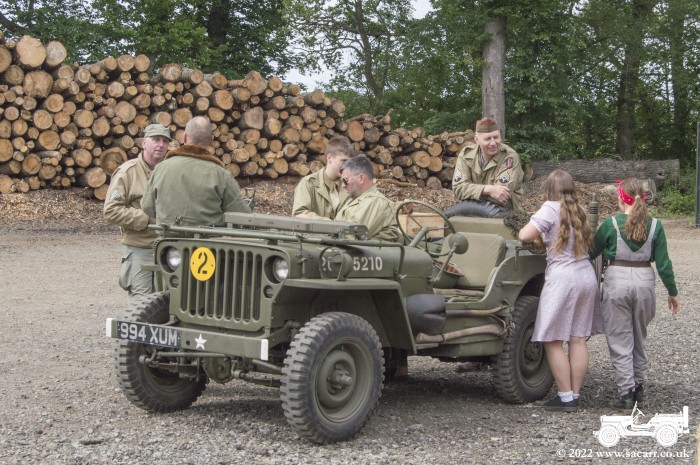 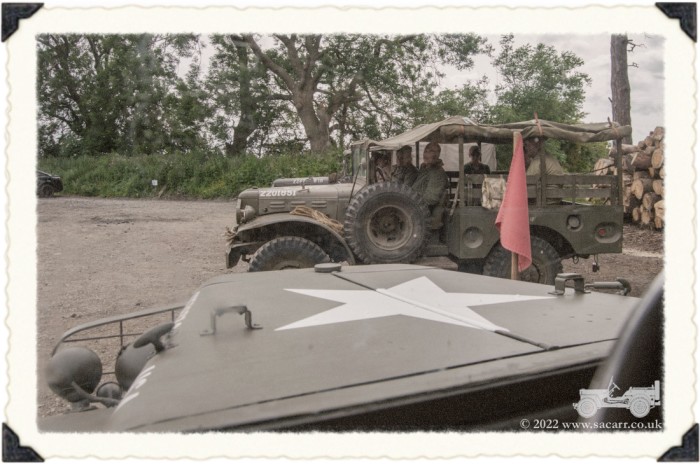 Derek's GPW was in the lead, then Chris' Dodge WC51. I was next in my WC51 with the trailer in tow. 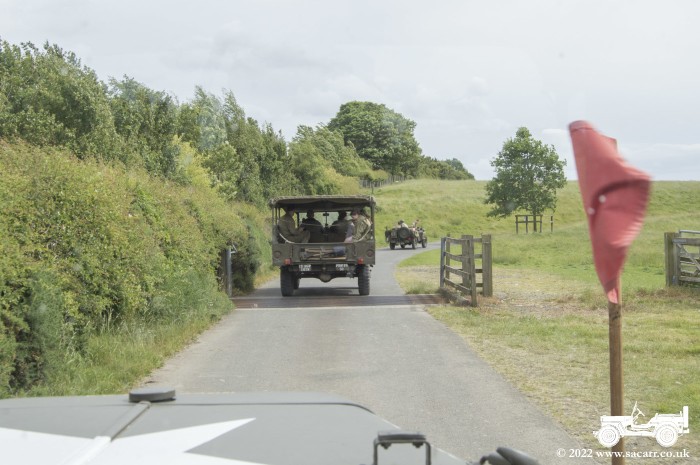 Paul, who also has a WC51, brought up the rear of the military section and the vintage bus just coming into view, followed that. 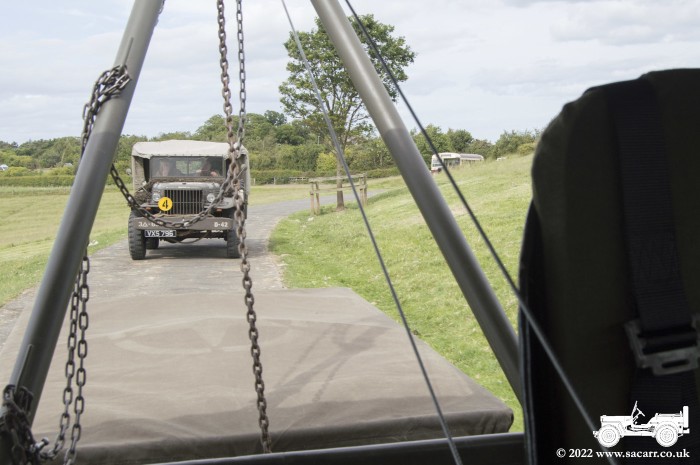 We made two laps through the village, stopping briefly after the first to swap passengers into the appropriate vehicles for lap two. 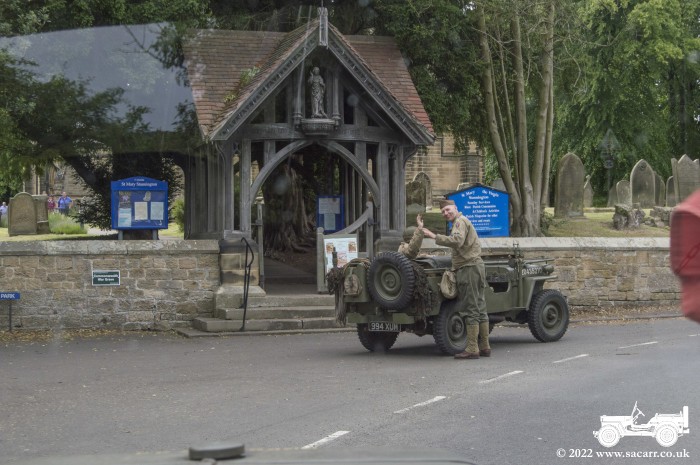 We made a small detour to the RAF Morpeth water tower to get some photos. It wasn't far from the camp site and it could be seen above the tree line from certain parts of the site. Neil's family and us stayed at the camp site on Saturday evening and packed up to return home on Sunday morning. 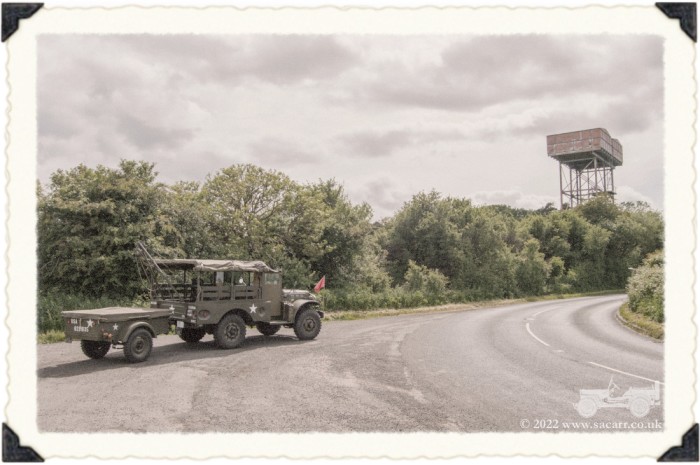 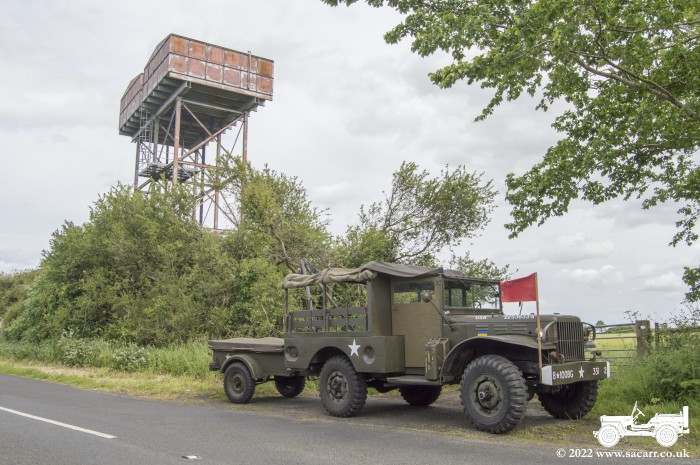 Bowes railway was a two day event, but I only attended on Sunday due to being at a fly-in at Breighton Aerodrome on Saturday. We decided to take both the Dodge and the M201 for our first two vehicle display of the year. It was a bright morning, but quite breezy and it turned out cooler than we expected. This seems to be a theme for events this year. It was the third outing for the M201 and the fifth for the Dodge. I figured after a year on axle stands in 2020/21, "Faith the Dodge" deserved more of the limelight in 2022, especially with the new look. 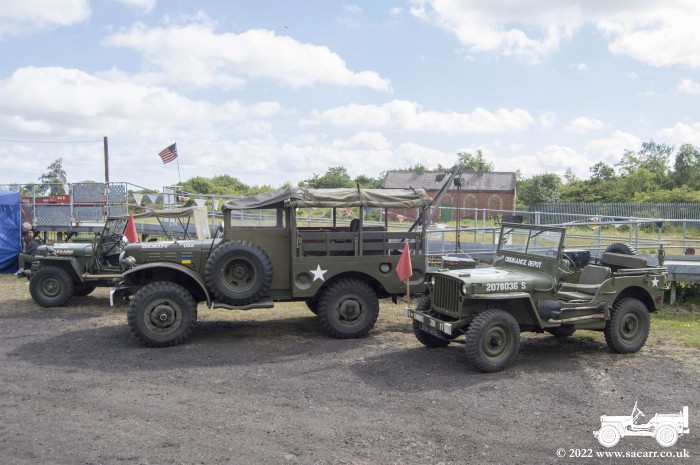 The "Jessie the Jeep" has generally been devoid of "Follow Me" markings since moving as the follow me light box on the roof bows, won't fit through the standard garage door height. Since the first builders we booked last year, never showed to modify the garage door openings, we haven't got around to looking for another company yet. 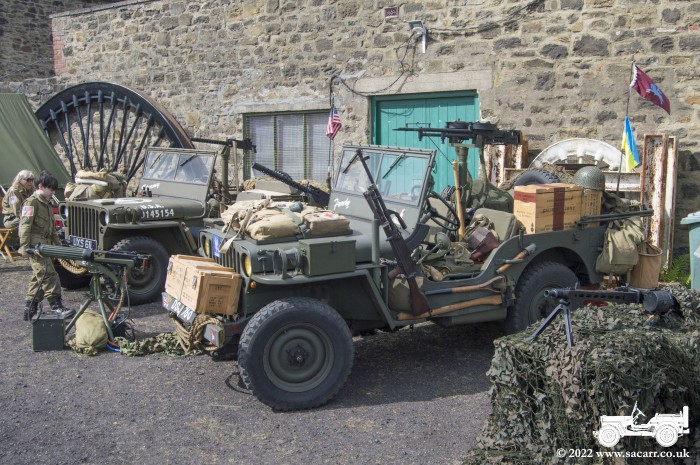 There were fourteen military vehicles in attendance, plus a couple of classic cars elsewhere in the village. 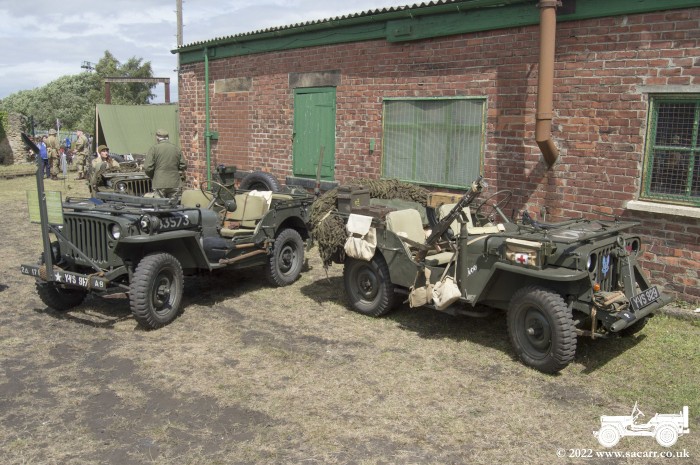 Jeeps made up the majority of vehicles, but there were also two Kubelwagons, a BSA bike, a half ton Dodge and my WC51. 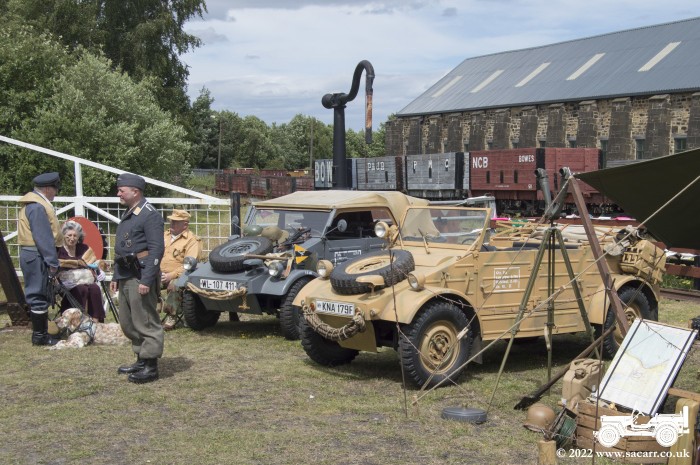 There were also several dioramas and displays of weapons and equipment, each telling a small part of the World War 2 story from different perspectives. 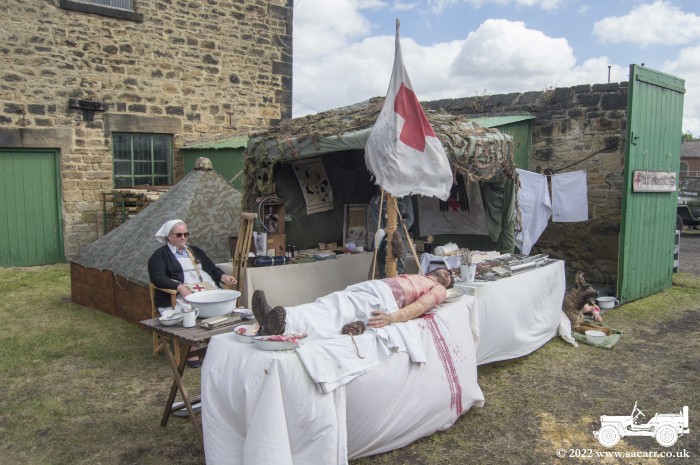 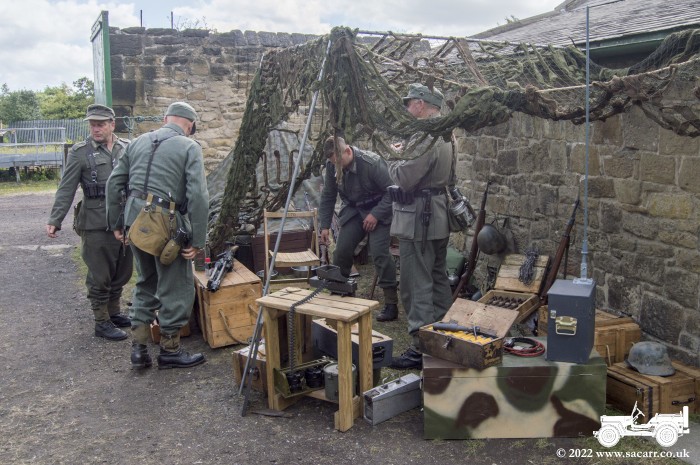 During the day, there were firing demonstrations and at 2pm, a battle amongst the rail yard as in previous years. Despite the bright day, the strong wind pulled the temperature down, though it didn't stop a good number of public attending the event. 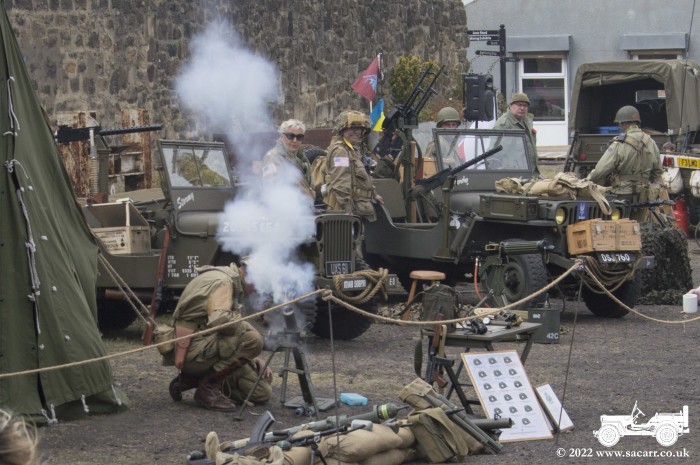 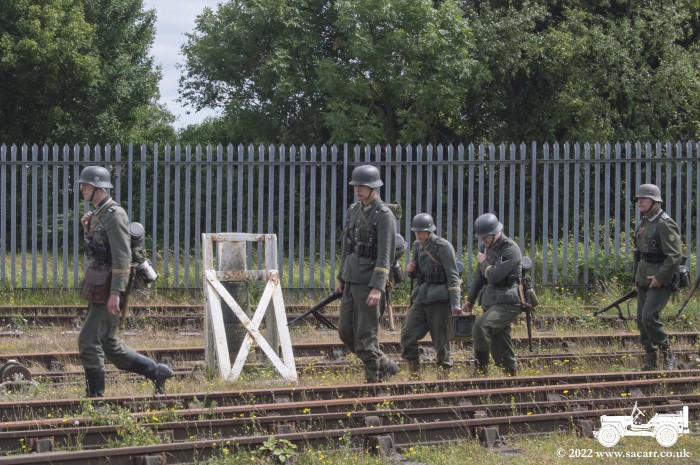 I did have a great weekend at the Chester-le-Street Steam Fair in the grounds of the Lambton Estate, however, it wasn't smooth sailing from even before I set off. It began on Friday, while assembling the Dodge roof and I caught two fingers on a sharp piece of wood and sliced two gashes across my knuckles. They've been opening up every time I used my hand. Despite the injuries, I got there mid afternoon and melted as I set up my tent in the roasting afternoon heat. My boxes and cans were emptied from the back of the Dodge while I contemplated where to put them. They'd spend the night in the tent, particularly as one of them had all my cooking gear inside. 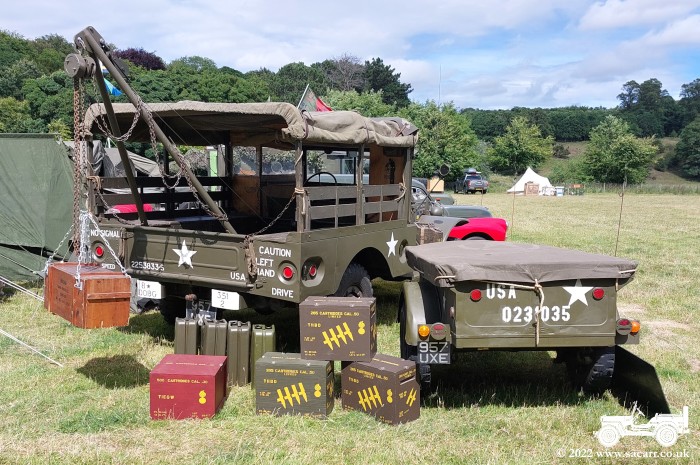 Allocated space was going to be a bit tight on Saturday due to the number of vehicles booked in, so I squeezed all my boxes and Jerrycans in front of the Dodge and trailer. 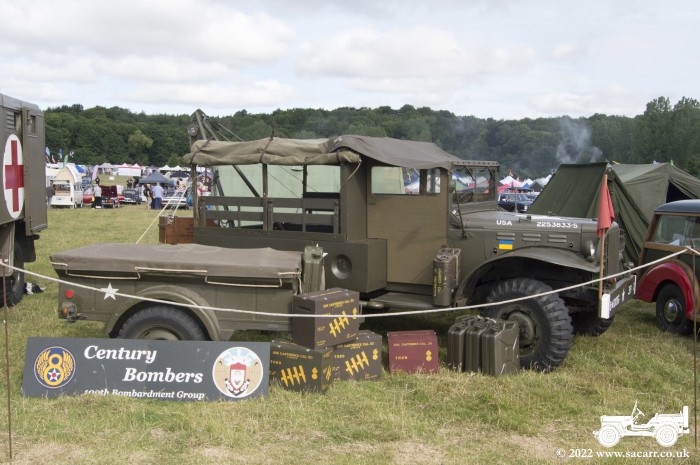 There were about 22 military vehicles there on Saturday and a few less on Sunday. Most were in a row as seen below with camping behind the vehicles. Jeeps only just outnumbered Austin Champs. 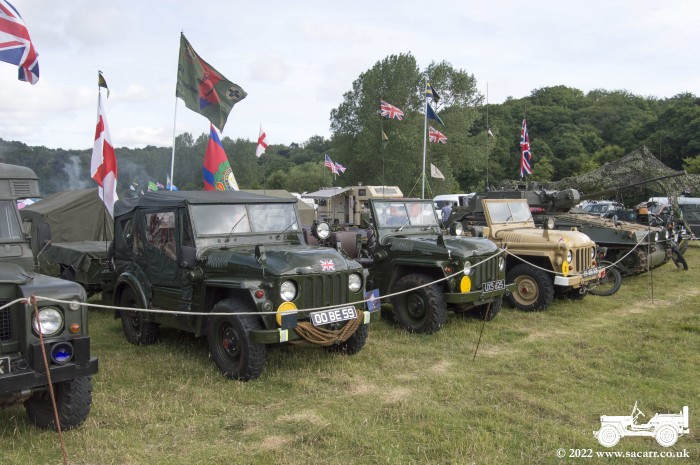 A few other vehicles were displayed in dioramas elsewhere on the site. I had a quick wander around the site on Friday evening, but not everything had arrived and other stuff was under cover for the night. 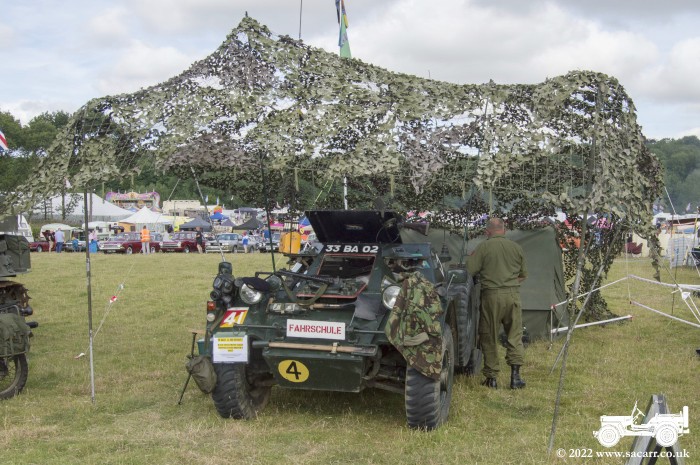 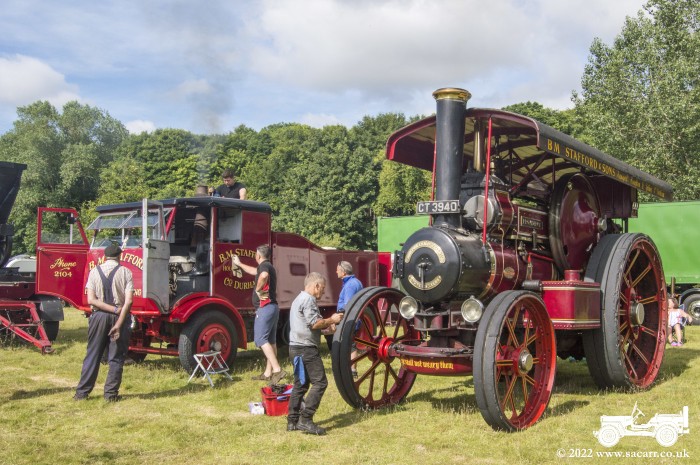 In addition, there were a wide range of classic cars and trucks. All of the vehicles and dioramas had their own areas around the 50 acre show site. 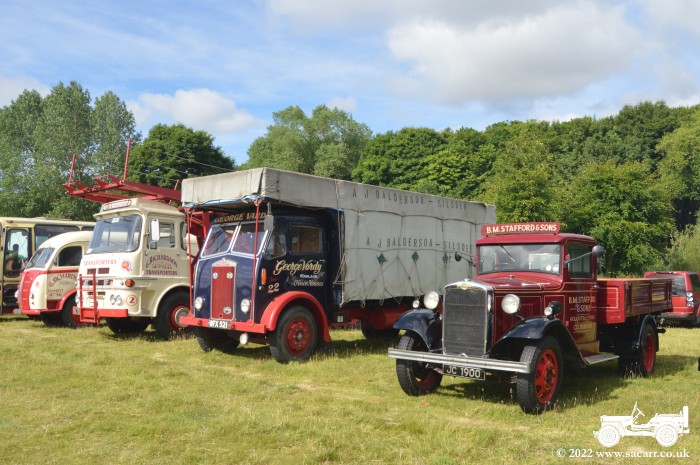 The dioramas and re-enactors weren't all just World War 2, but across a range of time periods, many doing displays in the arena. 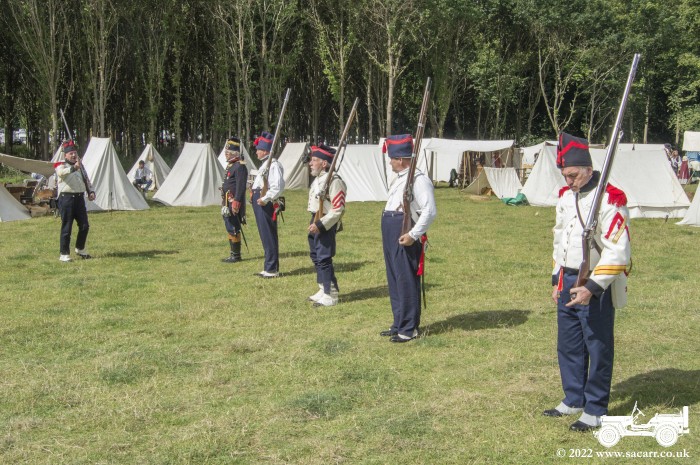 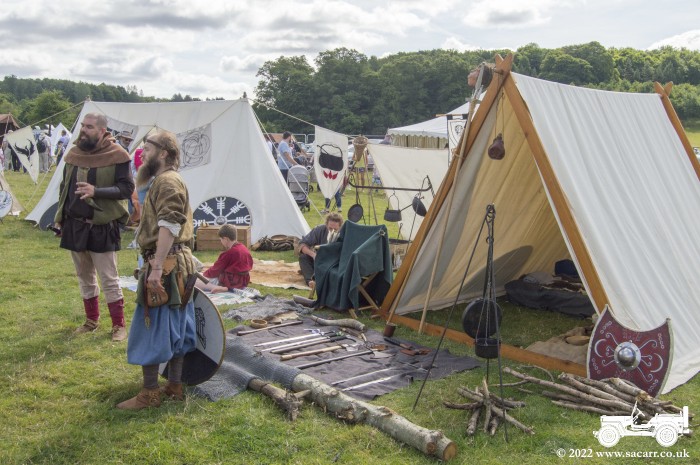 Late afternoon on Saturday, it was the turn of the military vehicles to display in the arena. A couple of laps around the arena and then interviewed about the vehicles so the public could get a little more background knowledge about each one. 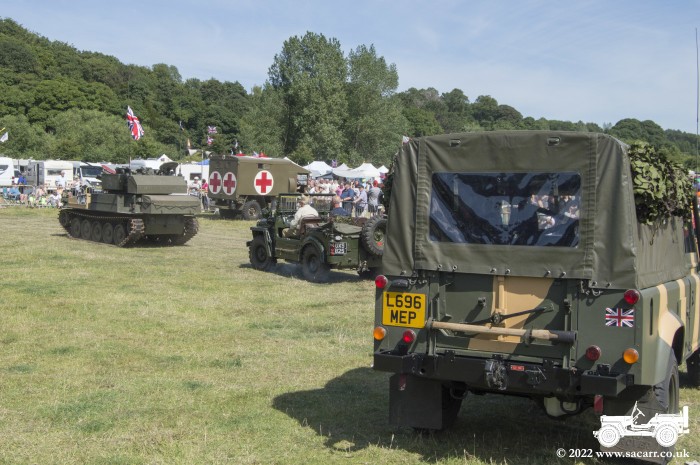 The Dodge wasn't running very smoothly and felt like it was going to die if it remained on idle too long. I put it down to fuel vapourisation in the very hot weather. 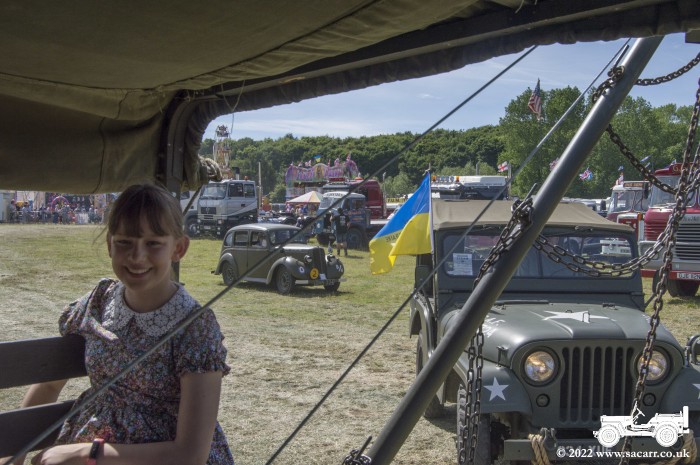 Wifey and daughter dropped by the show for a little while during the afternoon and during our wander, I lost my camera lens cap through a hole in the pocket of my HBT trousers. I was annoyed. I almost lost my phone too, but that fell out near the truck, which is when I discovered the hole.

Washing up after tea, I managed to slice my left hand open on a sharp edge on the grill pan! Things weren't going well this weekend. My luck changed later in the evening when I went for a wander again, walking the same route I had with wifey. Towards the end of the walk, near the static engines, I found my lens cap!
Steve Carr

On Sunday, there was another military vehicle parade, but I decided to miss it due to the problems of the previous day. 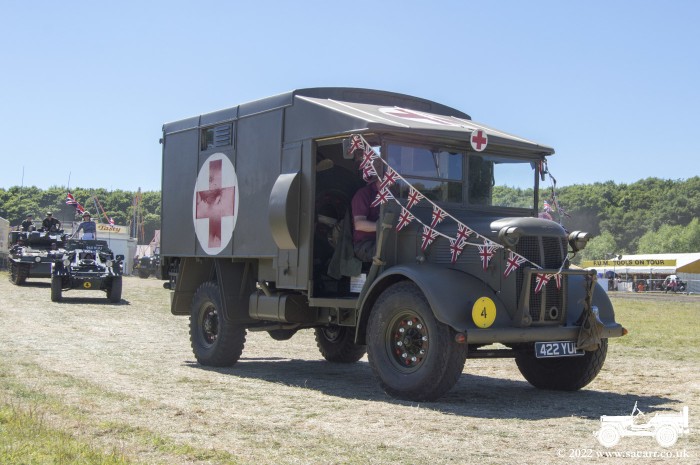 Since there were a few less vehicles there, the K2 ambulance moved over and I had a little more space to spread out my display. 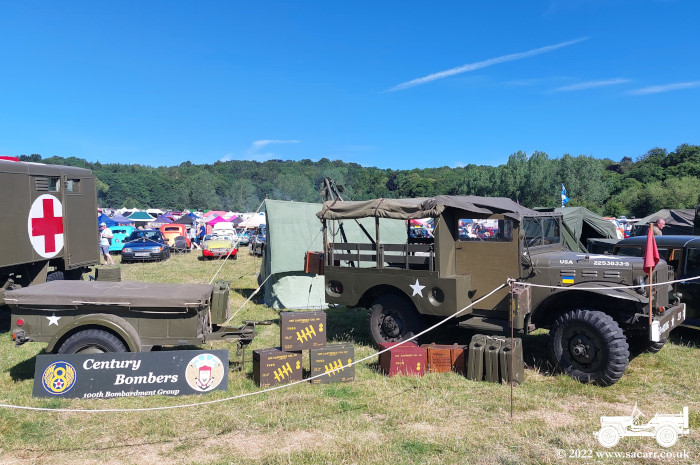